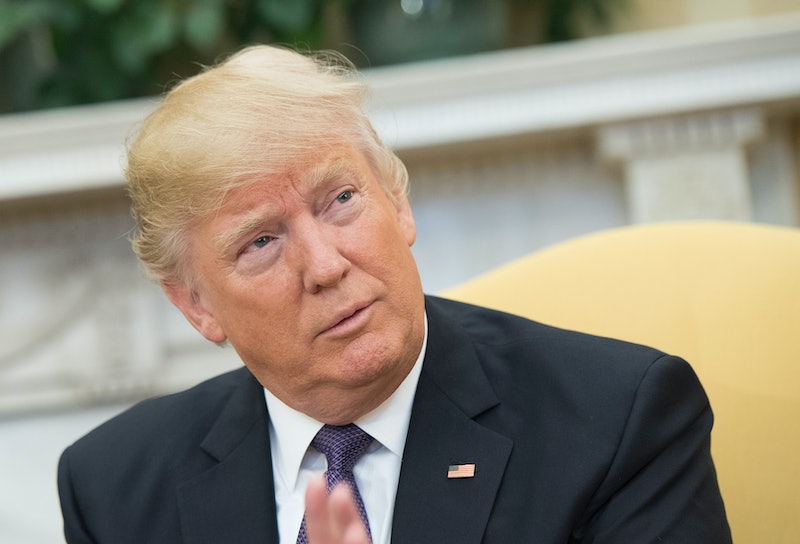 On Friday, Jan. 20, I couldn't help but feel sad when Barack and Michelle Obama climbed aboard Marine One and left us in the clutches of Donald Trump. On Monday, Jan. 23, I left the country for a three week trip to the United Kingdom, and just got back this weekend. In the 25 days that Trump has been in the White House, things have already changed significantly. Here are seven ways that Trump's presidency has shaped our country.

The same way that Trump completely reshaped the way presidential politics during the campaign, he has brought his own, ahem, unique style to the White House. Between the strange press briefings of Sean Spicer, the realization that Trump wasn't going to give up his Twitter account (or, apparently, his unsecured phone), and the nonstop roll out of executive orders, the era of Trump's presidency already has its own flavor, and I'll be honest: I don't like it.

And though it's still early — 25 days down, 1,435 days to go — it feels as if the mark Trump has left on this country may already be indelible. These seven ways Trump has already shaped our country are probably only the beginning, but they're nevertheless huge.

1. Trump Has Turned It Into Protest Nation

From the moment Trump won the election, protests have broken out. But it was the Women's March on Washington, and its sister marches around the country and the world, that emphatically showed that Trump's opponents were not going to sit idly by during Trump's presidency. The spirit continued when Trump signed an executive order on travel and refugees that targeted seven majority-Muslim population countries; impromptu protests at airports around the nation broke out in response, almost immediately after it took effect. America may have been dealt a blow by Trump's election, but they certainly aren't going quietly.

2. We're Reminded Of Why The Courts Are So Important

There was a certain horror that befell many of us when Trump signed his travel ban executive order — how could this happen in our country? — but the country's judicial system swung into action, with injunctions and restraining orders coming down in New York and Virginia, before the entire executive order was blocked. It can feel a bit like we're in a strange dystopia with the GOP in control of the executive and legislative branches, but the judicial system might just be the stabilizer that saves us.

3. The Press (Well, Most Of It) Isn't Rolling Over

There are still a lot of questions and nuanced debates being had over how to cover President Trump going forward, but one thing's for certain: most journalists do not seem intimidated by Trump's anti-press antics. Watching Sean Spicer's press briefings alone is proof enough that the press is going to try their darnedest to do their job.

4. Americans Are Being Reminded Of The Power (And Responsibility) Of Democracy

After Trump won the election, there was a national discussion on the importance of voting — not just for presidential elections, but for local and state elections, as well, especially when it comes to setting electoral policy. Issues like gerrymandering and redistricting, education, and health care are controlled much more closely at these lower levels of government, and keeping tabs on when these less sensational but crucially important elections is vital.

5. Immigrants Are Already Living In Fear Of Trump

While the Obama administration did deport more immigrants than its predecessor, his administration also made attempts to avoid separating families, including through DACA, DAPA, and the DREAM Act. But now that deportation raids under Trump have begun, many immigrants are living in fear for their families, their future, and their lives.

I used to follow @POTUS on Twitter, but for the most part, the tweets from President Obama were tame, vetted, and inoffensive. But Trump's use of Twitter — as a way to sledgehammer the media into covering what he wants covered — is as sinister as it is cunning. Whether the media will catch on is another question entirely.

7. Politics Is More Cynical Than Ever

It's no secret that politics is cynical, but things seem worse than ever. Just remember: keeping you cynical about politics is what Trump wants, so make sure you don't let your cynicism keep you from participating in the political process!