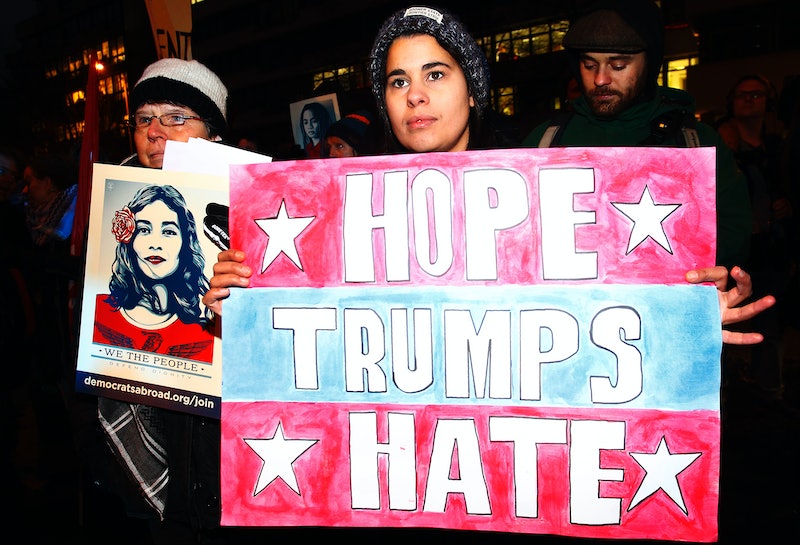 In November, Americans elected to the White House one of the most divisive candidates in the country's history. Since then, the protests, marches, boycotts, sit-ins, and fundraisers opposing President Trump's policies on women, racial and religious equality, climate change, scientific research, health care, gun control, and foreign affairs have been nonstop. Through it all, there have been some heartening progressive political victories in Trump's America.

Grassroots activism on both the right and left has been notably energized following Trump's unexpected win — calls to Congress rising at unprecedented rates, never-before-seen fundraising spikes, and protests bringing out historically large crowds. Similar to how conservative grassroots movements, especially far right groups such as the Tea Party, benefitted from a sense of enthusiasm and urgency during the Obama administration, the left is seeing a surge of political engagement now, too. With the help of groups like Indivisible, who actually looked to the Tea Party's tactics to design much of the Indivisible Guide, liberals and progressives are stepping up with similar energy — for completely different causes, of course.

Though often positive news for progressives can get drowned out by the endless list of Trump scandals and proposed Republican policies, there have undoubtedly been some achievements on the left worth celebrating. Here are some of the most encouraging ways politics has made progress this year.

By March, Democrats had won seven out of nine contested special elections across the country. The higher-than-usual turnout and the dramatic increase in margin percentage points — in Iowa, for example, two Democrats saw margin boosts of 30 percent — have been considered signs of things to come by some.

"Since Democratic turnout almost always tends to lag in special elections, the fact that our candidates have consistently performed above the margins in last fall's presidential race suggests that the intensity we're seeing from the Trump resistance movement in the streets is translating to the ballot box," said Daily Kos Political Director David Nir.

In addition to winning races in parts of the country that typically vote blue, Democrats have clinched victories in places considered Republican strongholds. In April, a slew of Democrats unseated Republican legislators in Illinois; Alderwoman Chasity Wells-Armstrong became the first African American mayor of the city of Kankakee; Normal Township will have a Democratic-run board for the first time in 100 years; and Elgin Township also flipped to an all-Democrat board. "We won in areas we normally would win, but we also won in areas Republicans never expected us to be competitive in," Illinois Democratic County Chairmen’s Association Executive Director Dan Kovats told HuffPost. "They were caught flat-footed."

Over in Georgia, Democrat Jon Ossoff is leading in polls in the special election for an empty House seat. The razor-thin margin by which he failed to crack the 50 percent margin in the primary in a state where Republicans usually win comfortably is yet another sign that progressive grassroots efforts are having a tangible effect on the political landscape.

President Trump and his proposals have served as huge fundraising motivators for progressives and liberals. The Democratic Party as a whole, the campaigns of individual Democratic legislators, and grassroots organizations have seen exponential surges in the amount of donations rolling in.

In one month, New York Sen. Kirsten Gillibrand raised roughly $637,000, more than six times higher than what she raised for the entire first quarter of 2011. And Gillibrand is not the only Democrat to report such a boost — Connecticut Sen. Chris Murphy and others have enjoyed similar support. The groups Daily Kos, Swing Left, and ActBlue raised over $2 million in just 24 hours after House Republicans passed the AHCA bill last month.

4. The AHCA May Die In The Senate

Trump may have enjoyed a ceremony claiming victory over his Obamacare repeal's passage in the House, but the "win" was short-lived after Senate Republicans declared that they wouldn't even bother to vote on the deeply unpopular bill. Sen. Orrin Hatch of Utah admitted that the bill's poor CBO score had sparked "a lot of concern" for GOP legislators.

Senate Republicans are now planning on drafting their own bill, which will then have to once again pass both branches of the legislative branch. As Hatch admitted, "There's gonna be argument."

5. The Travel Ban Is Still Blocked

After two attempts at fulfilling his campaign promise of refusing U.S. entry to refugees and all other visitors from certain Muslim-majority countries, President Trump's travel ban is still blocked. And getting it unblocked will not be easy. You can thank groups like the ACLU for successfully suing against its implementation and federal judges like James Robart for imposing restraining orders on the executive order.

6. More Women Are Running For Office Than Ever Before

The progressive reaction to Trump's policies is especially visible among American women. Emily's List, an organization dedicated to electing pro-choice women, reported that 13,000 women from around the country have reached out to the group about seeking public office, an astonishing difference from the 920 who contacted the group in 2015 and 2016 combined. The groups Ready to Run and Emerge America have also reported striking upticks in the number of women interested in campaigning. This is an undoubtedly positive change, as past studies have shown that women are less likely to run for office due to perceptions of gender and power.

7. Republicans Are Feeling The Heat

Republicans across the U.S. have been facing mounting pressure at town halls from constituents inspired by the grassroots movement to take on the president, and the intense face-to-face opposition from their constituents has made a definite impression on many.

The fear of empowering their Democratic opponents and losing their own seats is a proven concern among lawmakers in the right. In January, Rep. John Faso was secretly recorded speaking about his worries of repealing Obamacare and defunding Planned Parenthood: "Health insurance is going to be tough enough for us to deal with without having millions of people on social media come to Planned Parenthood's defense and sending hundreds of thousands of new donors to the Democratic Senate and Democratic congressional campaign committees. So I would just urge us to rethink this."

If you're looking for a way to take action right now, Indivisible's list of resources is a great way to start, whether you're new to activism or a seasoned veteran.