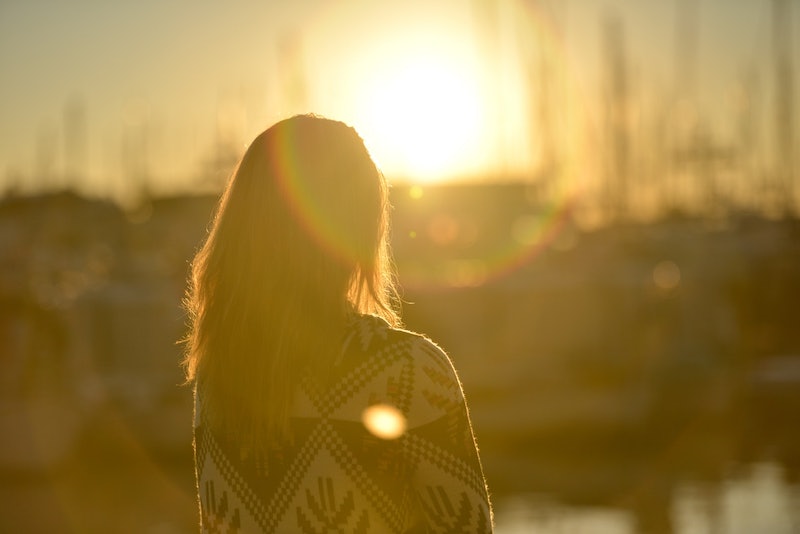 Between Mercury, Saturn, Neptune, Uranus, and Pluto all being retrograde, and the dumpster fire that is passing for the United States, you might be feeling all dark and twisty when the solar eclipse gets added to the mix. Brace yourself because ways the solar eclipse may affect your mood include feeling off balance, annoyed, anxious, frustrated, and confused. It could feel like the rug is being pulled out from under you, and everything you thought was stable and secure is suddenly up in the air.

The good news is that this is all totally normal, and according to astrologist Susan Miller the solar eclipse is actually an opportunity to implement positive changes in your life once the dust settles.

"You can think of eclipses as a new or full moon on steroids," Miller explained in her guide to coping with eclipses. "They pack so much more energy and punch than a normal lunation of the sun or moon. In fact, they feel like they are three new or full moons rolled into one. An eclipse may even bring on an event that seems 'fated' in some way. Eclipses tend to get truth to the surface very fast, like a geyser of water forcefully rising to the surface."

So, while you might feel really uncomfortable during the Aug. 21 solar eclipse, it's actually a good thing because comfortable people generally don't initiate change, and change is the only way to learn and grow. If you're ready to shed your cocoon and turn into the butterfly you were meant to be, think of these ways your mood could be affected during Monday's solar eclipse as tools that could help illuminate your new path.

1. Your Anxiety Could Kick Into High Gear

"Eclipses are properly sublime events in the philosophical sense: That is, they are an encounter with something so astonishing and terrifying that you lose all capacity for reason," Helen MacDonald wrote in the New York Times.

In fact, eclipse anxiety is so common that the Smithsonian claimed that it helped lay the foundation for modern astronomy. "The hair-raising sense that something is 'off' during these natural events has inspired a wealth of myths and rituals intended to protect people from supposed evils," Maya Wei-Haas explained for the Smithsonian.

It was this fear and anxiety of impending doom that drove people to study the stars for patterns, and formed the foundation for modern astronomy. Basically, it's just as Miller explained, being uncomfortable forced people into positive change. And, while you may not invent astronomy, you really can use the solar eclipse to change the course of your life because believing in astrology doesn't negate the fact that you also have free will, so it's really up to you.

2. It's Normal To Feel Agitated

Miller noted that during a solar eclipse time can feel like someone pushed the fast forward button, which can leave you feeling agitated. "Eclipses bring events that you assumed were months or years away right up to your front door now," Miller explained. "There is always a feeling of life moving very rapidly — it is life on fast-forward, or great acceleration. Sometimes an event will make us sentimental at eclipse time, as we are very cognizant of the passage of time."

Depending on where you are in your life, this could force you to make a decision. If something you aren't dealing with seemed far off into the future and suddenly smacks you in the face, you might not have any choice but to confront it.

Solar eclipses illuminate truth, so don't be surprised if you uncover something that has been going on behind your back. While any betrayal will certainly feel jarring, it can ultimately lead to positive change. Often, people don't want to see what's happening right in front of them because once you consciously know something you might have to take action when you don't want to.

"Sometimes it’s hard to believe that things that are happening in the outside world over which you have no knowledge or control would have the power to trigger conditions of such massive change at eclipse time, but that is precisely what can happen," Miller noted. "It can be a big or small event that changes everything."

A large-scale example of this would be if every Trump supporter suddenly realized they've thrown their support behind the wrong person and came to their senses. As for a more personal example, Miller gave this scenario. "It could be something as small as finding a torn ticket stub in your mate’s pocket while doing laundry that eventually reveals a secret affair. Indeed, often at eclipse time an important piece of information is given to you accidentally. Still, no matter how the information comes to you, it can set off a chain of events that will force you to see things in a new light."

4. You Could Feel Totally Out Of Control

When you're feeling anxious, you might have a tendency to try to control things in order to feel more grounded. Miller noted that this effort is futile, and it's totally normal to feel out of control during an eclipse.

"At eclipse time, keep your schedule light and elastic," she recommended. "No matter what is on your agenda at the time, something else will come in to demand immediate attention."

If you've been busy juggling several things at once, be prepared to drop one of your balls during the solar eclipse. Eclipses can make you feel overwhelmed, and an actually illuminate something you might need to discard, which is a good thing.

Miller noted that the solar eclipse may help your recognize that you have too many eggs in one basket, or you've been trying to do to much and you're depleting your energy. And, this celestial event might force you to stop. "Eclipses often form a time of complete evaluation, for they have the power to change everything related to the area of your life that eclipse is emphasizing."

6. Don't Be Surprised If You're Emotional

The solar eclipse could induce some tears, and that's totally normal. Miller noted that eclipses tend to manifest extreme emotions, so if you've been keeping a lid on something — it just might blow off on Aug. 21. She cautioned that decisions should not be made in haste from an emotional place.

"Your judgment may be impaired, or pieces of information may be missing, so bargain for more time to think about your decision or next action," Miller advised. "You may want to wait seven days before deciding, but that is not always possible. If someone comes to you with a proposal, consider it carefully. If after looking at it from all sides you like it, then proceed, but try to beg for just a little extra time."

While eclipses can make you more moody, because solar eclipses usher in positive change you could feel some relief when something that's been weighing on you gets resolved. A path forward might be illuminated, or you could think of a solution to a problem that's been plaguing you.

"Imagine that a puzzle piece fell out of the sky into your hands," Miller explained. "This new piece offers information, and when added to the overall picture of your puzzle will change the complexion of the situation and bring you a flash of insight. You may say, 'For the first time, I understand!' Now you have a full picture of the situation and can make a fuller, more realistic appraisal of what it means to you. You will also know what you must do next."

Learning about how the solar eclipse might affect your mood up front is kind of like having a really good map. It will help you get to where you're going faster than you would by just winging it.