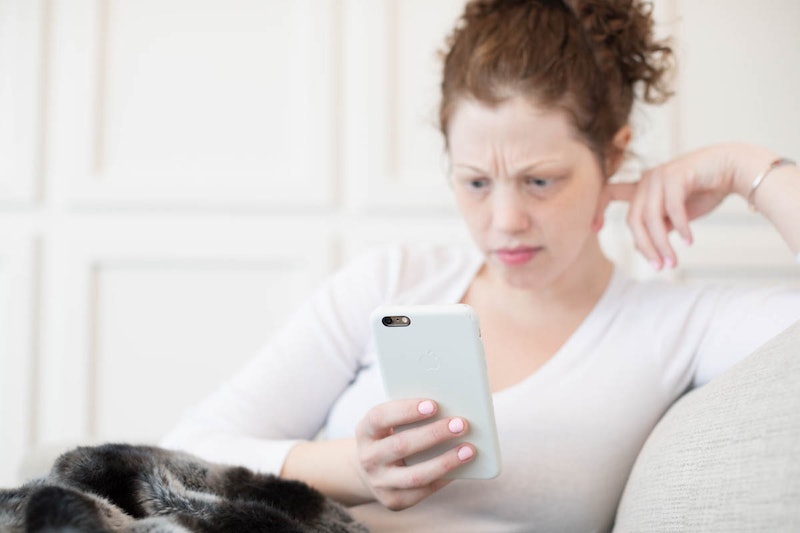 Keep in mind that living paycheck to paycheck is not limited to lower income people, says Marshay Clarke, a certified financial planner at Betterment. Even if you earn more over time, the costs of your lifestyle might creep up along with your income. "Living paycheck to paycheck can be if you make $35,000, $50,000 or $100,000 [per year], and that's just because if you don't have a good way to save [for] your expenses and the way that you live your life will catch up to you," Clarke says.

Getting out of a paycheck to paycheck situation looks different for different financial situations. For some, it means stretching a low salary to make ends meet while taking on side hustles. For others, it may mean paying down debt and closely examining lifestyle choices. Here are a few strategies for balancing your budget, no matter how slim.

Saving even $1 every month is a step toward building a habit of saving, Clarke tells Bustle. Aside from creating a buffer for emergencies, saving money for the future could give you a better boost during tax time. If you put money in a retirement account, the credit can be up to $2000 a year, which can come back to you in the form of a lower tax bill, Clarke adds.

If you qualify for public assistance, or need help from your family, friends, and community, there’s no shame in that. Around the time that Miranda Marquit, a financial journalist and finance expert for Student Loan Hero, and her ex-husband were raising their newborn child and going to grad school in 2004, she earned minimum wage as a cashier in order to support her family, she tells Bustle. To help stretch their limited funds, she used WIC coupons (given as part of the Special Supplemental Nutrition Program for Women, Infants, and Children) to purchase food. She found a local babysitting co-op to help ease childcare costs. “It’s really hard to feel like people aren’t staring at you, and there are days when I really didn’t want to do it,” says Marquit. “In the end, I thought about my son, and said, ‘This needs to happen for my son [...] And also reminding myself that it was temporary.”

3. Charge For Your Talents

Subscribing to newsletters just gives advertisers a reason to sell you things you don’t need or can’t afford. These newsletters could create an unnecessary sense of urgency when you open your inbox, Julie Ramhold, a consumer analyst at DealNews, tells Bustle. “When you do need something, find it at your favorite store, then check comparison sites for coupons or other deals,” Ramhold says. “If it's not on sale, and there's no way to discount, hold off — as long as you don't need it immediately. Bookmark the item and set an alert so you'll know if the price drops. Or just check back on it to see when it does go on sale.”

Sometimes you can’t help but use credit. That’s especially true if you don’t have an emergency fund. But it's not all bad. In fact, if you use credit wisely, it that will improve your credit score, making it easier to get more credit for better rates down the road. But if you can, avoid debt whenever possible, says Clarke. She recommends avoiding high-interest credit cards or payday loan debt. “If you’re in a situation where you have no savings at all, it’s really more so being educationally aware that there are people out there who are going to try to take advantage of you,” she says. Instead, weigh your options at alternative lending platforms or credit unions and banks with which you have a rapport.

6. Avoid Lending To Others

It’s tough to turn down close friends and family who may come to you for a loan, but Clarke says avoiding lending money could safeguard your financial future. Lending your name for a bill or co-signing for a loan could upend your budget if the person you’re co-signing for defaults. Plus, it could negatively impact your credit score down the road, which would make it hard for you to pay for big-ticket items like a home or a car. “Sometimes there’s someone else that they can go to that may say yes,” Clarke says. “If you’re able to explain that, ‘I can’t do this right now’ [...] then it’s really hard for someone to come back to you in a negative or hostile way.”

Look for ways to cut recurring expenses in your budget. Moving to a cheaper home or apartment may be tough due to moving expenses, but you may be able to find a cheaper living space in the winter than in the summer, Clarke points out. Beyond switching from cable to streaming services, you could try negotiating your phone bill, switching to a cheaper plan or avoiding a cell phone upgrade, Clarke says.

Yes, everyone's situation is vastly different. Of course, these aren't end-all solutions, but they are small steps toward financial security.

More like this
What Is Harry & Meghan's Net Worth? They're Richer Thanks To Their Netflix Doc
By Hugh McIntyre
An Open Letter To The Person Who Bought Steve Jobs’ Birkenstocks For $218,000
By Ginny Hogan
8 Money Saving Experts To Follow For Accessible Advice
By Maxine Harrison
Is Blake Lively Or Penn Badgley The Richest 'Gossip Girl' Star From The OG Series?
By Hugh McIntyre
Get Even More From Bustle — Sign Up For The Newsletter