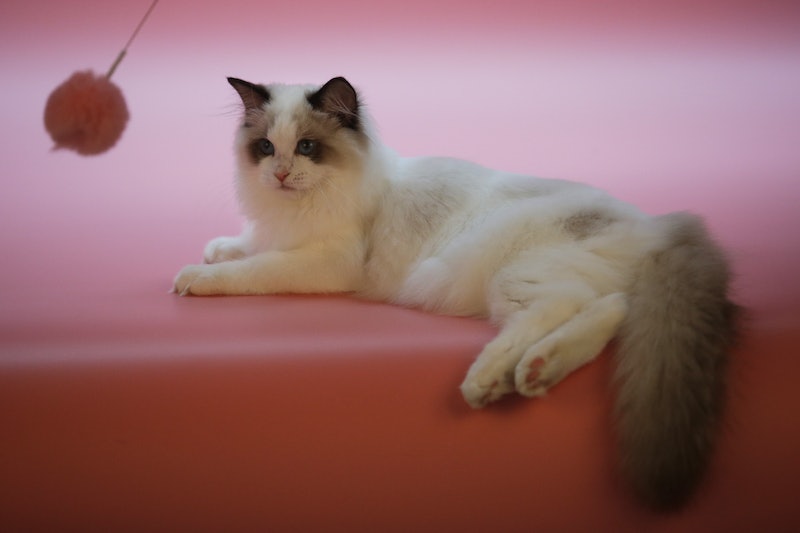 Cats may not be able to speak to us, but they're amazing communicators nonetheless. When kitty's happy, you know it — they bare their furry bellies, loudly purr, knead they're paws on you, and softly blink their eyes. So cute. You know the signs. But how about those moments when your kitty is not so happy with you? It's good to know how to tell if your cat is mad at you — firstly, because you're a slave to your cat and obviously want to smooth over any cat/human drama ASAP, but also because you probably want to avoid getting claw-swiped by a pissed-off kitty. Both factors are important.

Just as cats use body language and other vocalizations to show that they're feeling comfortable with you, they do the same to show when they're feeling angry or irritated. "An annoyed cat is exactly that — a cat that’s starting to give you some warnings that he or she would like you to stop what you are doing," shared Dr. Margaret Gruen of Duke University in an interview with Catster. "You may see attempts to move away or a swishing tail, or a cat may use a paw placed on you.” You don't have to be a mind reader to figure out your kitty's mood, as they'll usually give you the signs quite clearly.

Remember, while it's totally normal for your cat to get annoyed with you from time to time (you are roommates/best friends/confidants, after all), if it's happening frequently then it's good to do some sleuthing and try to get to the bottom of why they're feeling this way often. Are there factors that you can control that are making your cat feel stressed or unhappy? If so, you'll want to address those things. Also, try to note if your cat seems upset when you touch certain spots on their body. Some of these reactions could also indicate that your cat is in pain rather than just angry, so check in with your vet if anything seems off or happens with regularity.

Here are 7 ways to tell if your cat is mad at you — because no one wants an angry kitty on their hands.

Give 'Em Some Space

You know you've given someone the cold shoulder when they've pissed you off — so don't be surprised if your kitty does the same thing. If your cat's mad, they might leave the area you're in, avoid getting near you, and simply watch your movements from afar. Cats just like to have some space if there's something bothering them or stressing them out, or if their routine gets messed up.

A Most Telling Tail

A cat's tail is basically a direct antennae to show you how they're feeling, and if your cat is mad, it's going to show. "A tail that’s flickering back and forth quickly or held low can indicate an irritated cat," explained iHeartCats. "The hair may also stand up on an angry cat’s tail." Look out for a tail that's lowered instead of standing up tall, and swishing back and forth, as this shows kitty is annoyed — and if their tail starts thumping, their mood has probably escalated from annoyed to angry, and they could become aggressive. This is usually a clear indication that kitty isn't happy with you or the current sitch, so steer clear.

It's All In The Ears

Kitty ears: All the better to hear you with, and to express their emotions with, too. If your kitties' ears lower down or flatten out against their head, it could mean they're in a mood. A bad one. Steer clear of heavy pets until they've perked up again.

Have you ever seen a kitty on high alert? Body language is a big part of it. The fur all over their body seems to stand up straight, totally puffed up, and they may even arch their back to appear even larger. Fluffy and adorable as they may look, this is a clear indication that they're angry or in fight mode. Conversely, they may instead try to make themselves look smaller by crouching their body low to the ground and hunching their shoulders. If you notice either of these body movements, it's good to make sure there are no other factors around that could be triggering this response, such as another animal outside the window or another animal in the household who may be antagonizing them.

It doesn't take a feline behavior expert to tell you that if a kitty is growling or hissing at you, they're probably unhappy with you or what you're doing. A low growling sound (or a deep, guttural vocalization that is different than a meow) is usually a clear indication that your kitty isn't happy with you or the current sitch. Same goes with hissing: It's basically a cat's way of saying "lay off," so listen to them. Once a cat starts making these vocalization, it'll behoove you (and help them!) if you stop whatever you're doing — petting, playing, etc. — and give the cat some space.

Almost every cat guardian has experienced a paw swipe while petting their beloved furry baby. Whether it's a gentle bat of the paw or a claws-out, blood-drawing scratch depends on the cat and how angry they are, but in either case, it could indicate that your kitty wants you to step off and give them some space.

Cat faces can be expressive too, although it's likely more subtle. Does your cat ever just give a look and you know what it means? Yeah, same. Sometimes you can tell your kitty is angry with you because they're watching you and giving you that subtle but identifiable angry eye. Another indication that they could be angry is that their pupils dilate — although this could happen for a wide variety of reasons, so look for other factors in conjunction with that before you assume your cat's mad at you based on pupil size alone.

More like this
The 5 Best Toys For Dogs With Anxiety, According To A Veterinarian
By Maria Cassano
The 5 Best Dog Water Bowls For Messy Drinkers, According To A Trainer
By Maria Cassano
Dog Trainers Swear By These 15 Little-Known Tips For Making Your Pooch Behave Better
By Allison Bolt
This Wi-Fi-Enabled Pet Feeder & Camera Gave Me Peace Of Mind On An Overnight Trip
By Danielle Calma
Get Even More From Bustle — Sign Up For The Newsletter