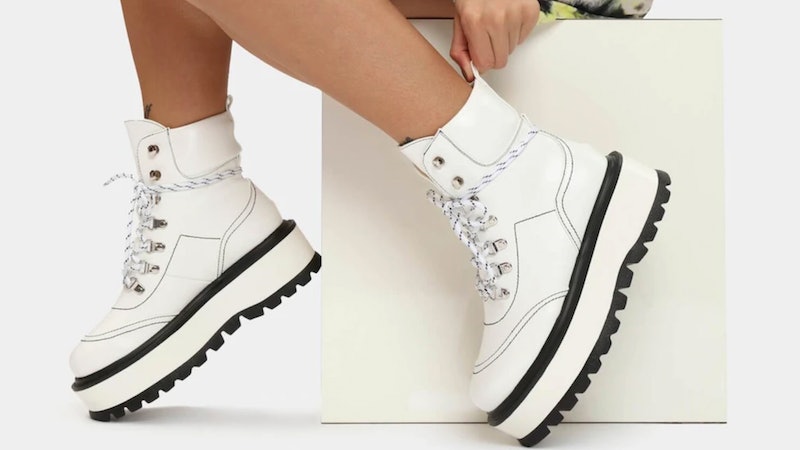 Platforms have been a thing for (almost) as long as humans have walked the earth. While the shoes were obviously intended to add height, increasing a person's stature isn't the only reason people have donned them. (Another two: avoiding faeces-ridden streets and conjuring up sexual desire.) Nowadays, they're usually nothing more than a style statement. But all their forms — from elevated trainers to boots and wedges — are experiencing a renaissance. Read on for all the ways you can wear platform shoes right now.

Ancient Greece kickstarted the platform trend, Interview magazine reports. Over the centuries, they went from a way to keep feet clean to a method of proving one's nobility. Theatre stars, courtesans, geishas, and 16th century men have all slipped on the ankle-snapping silhouette, per Refinery29.

Fast forward to more modern times where the gender fluidity of the shoe was more prevalent than ever. Rockstars in the '70s — both male and female — threw some shapes in dazzling platform boots, the Spice Girls invigorated a decades-long love for dizzyingly high trainers in the '90s, and brands like Prada delivered an array of ugly flatforms from 2010 and beyond.

Stilettos you can barely walk in may be a thing of the past. But platforms aren't going anywhere. Here's seven very different styles to prove just that.