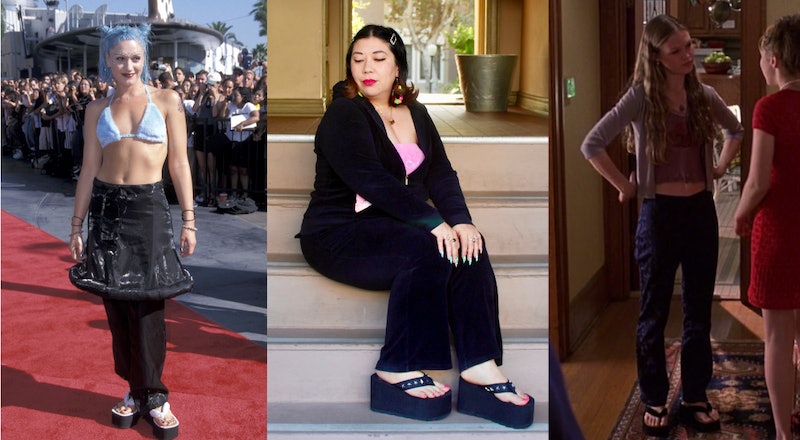 There’s a famous paparazzi photo of Prince at an airport in 2007. He’s walking alone, wearing an all-black suit, hat in hand, his eyes concealed by sunglasses, all the while emitting that kind of supernaturally-cool vibe that only Prince could possess. But when you glance down at his footwear, there beheld a most shocking sight: white tube socks and flip flops. But not just any old flip flops. Frankenflops.

Platform flip flops, or, what I’ve always referred to as “Frankenflops” due to the Herman Munster-esque platform sole, started out as a late ‘90s, early-aughts shoe trend that so many of us, along with our favorite celebrities (like The Purple One) could not resist, despite its clown shoe-like design. It was not a sophisticated style by any means. Flip flops are already controversial on their own; add a chunky platform and some people consider it to be blasphemy to fashion. But platform flip flops somehow held a puzzling allure powerful enough to stage a serious comeback.

Before exploring the origin of Frankenflops, we first must delve into the history of the stacked sole. Platform-style shoes have been around for centuries, and might even go back as far as Ancient Greece. Worn by European aristocrats in the 16th century, they were known as chopines. Many moons later, in 1938, designer Salvatore Ferragamo introduced “The Rainbow,” a gold sandal with a multi-colored platform wedge, created for Judy Garland and inspired by her signature song from The Wizard of Oz. But platform shoes didn’t really explode until the late 1960s and into the 1970s, during which the timing was serendipitous: They were the perfect style to go with all those flared bell-bottoms.

Twenty years later, in the 1990s, ‘70s revival helped bring those stacks back into the spotlight, fostered in part by musical style icons like Deee-Lite’s Lady Miss Kier and the B-52’s. Madonna wore a pair of black Fluevog Munsters in her documentary, Truth Or Dare; Naomi Campbell famously fell down on the runway while wearing Vivienne Westwood’s Super Elevated Gillie shoes (which featured a nine-inch heel and four-inch platform); and club kids from coast to coast would take their sneakers to the local cobbler to get custom stacks installed just in time for the next rave. And then the Spice Girls happened, which introduced platform shoes to the mainstream. It was only a matter of time for the stacked sole to evolve, eventually joining forces with the flip flop.

Though one could argue that they’re actually inspired by Japanese geta sandals, platform flip flops, the kind with the rubber soles, were first seen in American high fashion around 1996 when Amber Valletta strutted down the catwalk in a white pair for Isaac Mizrahi’s 1997 Spring/Summer show. The style would be worn by Gwen Stefani in 1998 at the MTV Video Music Awards, complementing her baby blue hair, matching fuzzy bikini top, and black skirt/pants combo on the red carpet. But the look didn’t really kick off for the everyday consumer until around 1999, when a certain Shakespeare-inspired high school comedy hit the big screen.

On March 31, 1999, the movie 10 Things I Hate About You made its debut in theaters, introducing Heath Ledger to the world while showing us that Julia Stiles had moves. It also ushered in a controversial footwear trend that would continue through to the following decade. Kat, Stiles’s character, was known for her casual, IDGAF style, the polar opposite of her girly, designer-loving sister Bianca (Larisa Oleynik). In most of the movie, Kat wears the same black platform flip flops, even during a scene where she and Ledger’s character, Patrick, are in a pedal boat. And, yes, Kat is pedaling with those damn flip flops.

In a phone interview, Kim Tillman, the costume designer for 10 Things I Hate About You, tells me how they wanted Kat in something that was appropriate for her carefree style but would put her on “solid ground,” which resulted in custom-made shoes. “Those flip flops in particular are the ones that you get in Asian markets. They kind of just have straw and are flat, but we loved the way they looked,” Tillman says. “The reason we actually added the rubber was for comfort because they were so flat, and she wanted to wear them a lot. They became kind of a signature piece for Kat.”

Tillman also says they worked better for the silhouette of Kat’s outfits, like her baggy jeans and army pants, a look we’d end up seeing a lot on the red carpet throughout the 2000s. “We liked the flip flop, the simplicity of it, but it needed some weight, some heft,” Tillman says. “This just kind of felt right.” Shoe brands like Steve Madden and Rocket Dog, the latter of which became basically synonymous with this particular style, would help bring the platform flip flop to new heights, so to speak.

The trend would gain traction, making its presence known throughout high school hallways and red carpet events. Paris Hilton, Hilary Duff, and Jennifer Aniston would all be under the Frankenflops spell. In 2001, a co-worker divulged to me that she would be wearing a white, rhinestone-studded pair underneath her wedding gown. And despite all my mocking, I’d find myself buying a pair to wear for my 21st birthday trip to Vegas. (Somewhere out there a photo exists of me smiling on the Strip, clutching a cold Fat Tuesday daiquiri, French pedicure proudly displayed upon a pair of black Rocket Dogs.)

The timing of the Frankenflop made sense. The 2000s was an era of extra-ness, (caused partly by the impact of Carrie Bradshaw, et. al). Designer logo handbags were blatantly displayed, then paired with exaggerated casualwear. Velour tracksuits. Low-rise cargo pants. High-priced trucker hats. J.Lo’s bedazzled bandana. There was a lack of subtlety; everything was loud, flamboyant, and a little bit, or, a lot, tacky. This was the ideal environment in which ridiculous sky-high flip flops would thrive.

But, with most fashion trends, the flops eventually fizzled out. By the time Prince was photographed wearing them in 2007, they weren’t in fashion anymore (Sorry, Prince). But that didn’t stop him from embracing his casual footwear of choice and owning multiple pairs in the style. The five-foot-three singer had commissioned the famous Sunset Boulevard cobbler shop, Andre No. 1 (founded by Andre Rostomyan), to create the famous heels he wore both onstage and in his everyday life, Now, the shop is located in the valley and run by Rostomyan’s nephew, Gary Kazanchyan.

When you walk into the shop, you’ll first notice shoe boxes stacked high on shelves, marked with famous names, everyone from Britney Spears to Lady Gaga, and Mariah Carey to Sylvester Stallone. If a Hollywood star required a special type of shoe, this was the place to go. For Prince, Andre No. 1 helped him sustain a serious shoe habit. “As soon as we started making shoes for him, it was nonstop, a consistent 30 to 40 pairs a month, for twenty-some years,” Gary Kazanchyan says as he hands me an old, beat-up pair of white platform sandals. Reader: I am holding Prince’s original Frankenflops.

“[Prince] was like, ‘Listen I love this platform, make them in all colors' because I think Rocket Dog only made white and black,” Kazanchyan says. Prince also requested double layers of cushion and that they be extremely light, so Kazanchyan hollowed out the bottom. “When we perfected that, he was just like, 'knock them all out as many or as fast as you can.' It was a new thing to our guys because they were more used to making dress shoes and boots, a little bit more complicated stuff. They were like why are we making sandals? Aren't they like $10 bucks in the store?’ We're like, listen, he wants them a certain way. So, that's how it all started.”

In 2017, 10 years after Prince’s famous photo, celebrity stylist Elizabeth Saltzman, whose clients include Gwyneth Paltrow and Saoirse Ronan, teamed up with Rocket Dog to create a “luxury line” of the brand’s famous Bigtop platform flip flops, that featured pearl adornments and rainbow soles.

Since the ‘90s, Saltzman had been putting celebs in the shoes after events to relieve them of the pain caused by stilettos. The comfort factor was too hard for the stylist to resist herself, and she would wear them for years to come. However, the ugliness factor was not lost on Saltzman. "They should be for whimsy. They’re not hip. They’re just fun and kind of tacky, and that’s what makes them cool,” she told CR Fashion Book at the time.

The comeback of the platform flip flop had been slow, but two years after Saltzman’s Rocket Dog collab, the style had finally reached a peak moment. Earlier in 2019, Steve Madden re-released their version of the sandal in a collab with Urban Outfitters, and similar styles were sold at millennial retailers like YRU and DollsKill. You can also Amazon Prime yourself a pair, which is what Floss Gloss founder, Janine Lee, did. For about 20 bucks, she purchased a five-inch tall, bubblegum pink pair to take on a trip to Hawaii, but they took up too much space in her luggage. So, she ended up wearing them for a shoot, where, Lee says, they “really got their moment.”

Lee had been a fan of the shoe since its first go-round, courtesy of an older, cool cousin. “She worked at the mall and put Lil' Kim on my 12-year-old birthday cake. I was like, ‘Oh my God, she's so cool.’ So she wore them and ever since then I was like, ‘I need to wear these,” Lee says, adding that as a shorter person, the shoes gave her "some height."

However, Lee points out the peril of the platform flip flop. “Honestly, they're hard to walk in and I've had some really bad experiences. I feel like I've been burned by a Frankenflop once or twice,” she says. The danger of the platform shoe, especially the flip flop kind, is something that podiatrists have warned about since the trend began. Dr. Miguel Cunha, founder of Gotham Footcare, says that a platform flip flop is a better option compared to a flatter style because it provides arch support, but there's danger because they lack ankle straps.

“It’s important to wear sandals or flip flops with ankle straps for two reasons,” Dr. Cunha explains. “One, if you’re constantly gripping your shoe with your toes you’re going to develop 'hammer toes,' or contractions of the toe joints that causes a permanently bent or flexed position in the toe. And two, if the flip flop doesn’t have an ankle strap for additional stability this can also lead to a higher probability of twisted or sprained ankles.”

The risk of a twisted ankle may be one of the negatives of a platform flip flop, but it didn’t apply to the overall ugly sandal trend. As the perfect companion to the Frankenflops revival, ugly sandals were everywhere this year. Every designer, from UGG to Gucci, put their own twist on the Tevas-inspired hiking sandal, which ran alongside the high-heel thong sandal trend worn by Kim Kardashian. (Ironically, the ugly sandal trend was in full effect during "hot girl summer.")

As sandal season begins to make way for fall, it might be time for Frankenflops to go back into hibernation until it is resurrected once again in the future. Until then, platform flip flop aficionados can rest easy knowing that, despite it be a polarizing shoe, they can always count on one thing: the higher the Frankenflops, the closer to heaven.