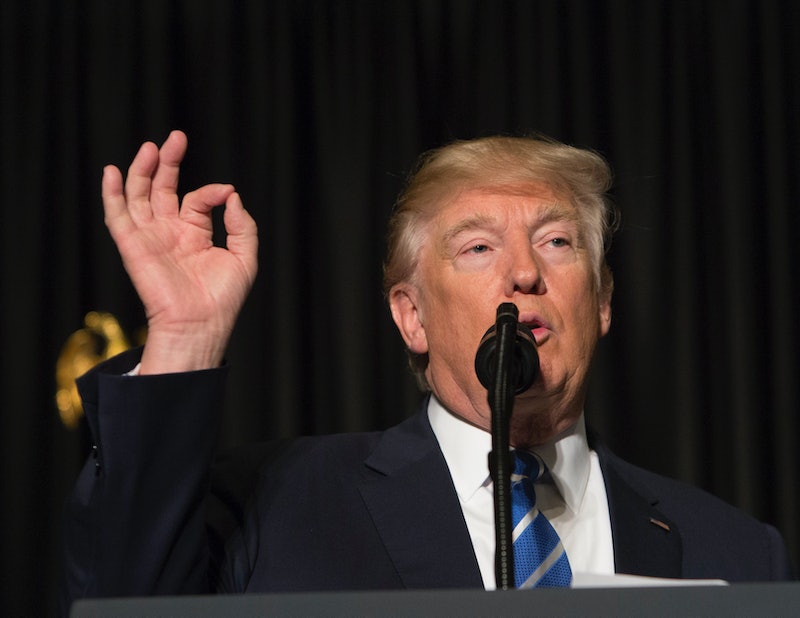 It's only been a few weeks, and yet things have already changed so much. President Donald Trump was inaugurated on Jan. 20, and in a very short amount of time, he's moved on implementing some of the most controversial parts of his agenda, perhaps none more so than his executive orders on immigration and refugees. But it's not just what's he's done ― he's changed the state of the country, too. Here are seven ways Trump's presidency has already shaped our country, because even though there are surely more changes yet to come, things are already drastically different much quicker than most people probably expected.

Whether it's all the protest, the upheaval and sense of uncertainty, the wild change in the decorum from the highest office in the country, or the disorienting, seemingly constant stream of controversies, scandals, and potentially avoidable imbroglios, there are now countless different factors weighing on the American body politic.

The only real question is whether these will be changes specific to Trump's tenure as commander-in-chief, realities of American political life that will go back to normal once his presidency has ended. Or, of course, whether he's irrevocably changed and shattered so many longstanding norms that things can never be quite put back together. Here are seven such examples.

1. Protest Is The New Normal

It doesn't matter where you live, what day it is, or what's rippling through the news ― if you've wanted to join a protest over the past few weeks, there have been any number of options. And far from being the sort of thing only dyed-in-the-wool activists are doing, many people who've never taken part in political demonstrations before are joining in, getting together on weekends of off-days to make their presences felt.

It's like the sign shown above outside the Trump International Hotel says: "Protest Is The New Brunch."

2. You Never Know What The President Is Going To Say

It's a bit like being forced to watch a movie that has no coherent plot, that just swings wildly from one thing to the next, never predictable, never stopping. Except imagine the movie lasts four years, and there are no bathroom breaks. You're locked in, and your civil rights, safety and security, and future all hang in the balance.

Will the president lash out at businesses that don't stock his daughter's fashion line? Agitate for an escalation of nuclear armaments? Respond to international crises in the bustling restaurant of his private club? Angrily alienate longstanding allies? There's simply no knowing for sure.

Of course, there's also the question of what the president won't say ― for instance, anything about the fatal massacre at the Islamic Cultural Centre of Quebec City, which left six Muslims dead at the hands of an alleged white, right-wing shooter. Trump's failure to comment on the massacre was underscored by the fact that he did tweet about a non-fatal attack at the Louvre museum in Paris that took place days later.

4. You Can't Assume The Administration Is Being Truthful

Obviously, you could never simply assume the government was being totally honest and open, even before Trump's ascension. There's a long record of secrecy in American government, with many historical examples of consequential deceptions, blurring of the truth, and outright lies throughout modern political history.

But the state of affairs in the early days of the Trump administration have really taken things to whole new lows. It's perhaps best summed up by White House counselor Kellyanne Conway's pair of damaging, mega-viral remarks during her still-young tenure as presidential surrogate.

First, when she referred to Press Secretary Sean Spicer's plainly wrong statements about the crowd size on inauguration day as "alternative facts," a somewhat dystopian turn of phrase. And, of course, her widely ridiculed and criticized comment weeks later that a pair of refugees from Iran "were the masterminds behind the Bowling Green massacre," an event which never took place. Conway subsequently said she had "misspoke" and meant to say "terrorists" instead of "massacre," though it was later revealed she'd used the same phrase when speaking to Cosmopolitan.

If you live in an area that's predominantly liberal, then you probably noticed people looking depressed and endlessly distracted after the election, regardless of how directly or indirectly they'll be affected by his policies. It's no stretch to say that the nascent Trump presidency is having a tremendous impact on people's states of mind, and it's dominating pop culture, too ― Saturday Night Live is practically being overtaken by its political sketches nowadays.

Indeed, in the months since the reality that Trump would be president first dawned on the country that fateful November evening, simply avoiding thinking or talking about politics for a while can sometimes feel impossible, with conversations with friends feeling like a contest to see who can go longer without mentioning his name. And that's not necessarily a healthy situation to be in. Sometimes, you need to take a second to breathe, you know?

For all of Trump's tough talk on the campaign trail, it's worth remembering that Mexico is a U.S. ally, a relationship that may be buckling somewhat under the weight of the new president's constant provocations and declarations. In the early days of his presidency, Trump was abruptly cancelled on by Mexican President Enrique Pena Nieto amid his ongoing demand that Mexico pay for his border wall boondoggle.

He also reportedly had a nightmare of a phone call with Malcolm Turnbull, the prime minister of Australia, a close ally with a sterling track record of supporting the U.S. militarily. According to the Washington Post, Trump bragged about his election win, castigated Turnbull over a refugee deal struck by the Obama administration, and only made it half of the way through the hour-long scheduled call before hanging up. Suffice to say, some traditional American allies likely can't feel comfortable with what they're going to get on any given day.

7. Every Day Has Two Or Three News Cycles

So, what's happened over the last week? Oh, not much, you know: the president's refugee and immigration ban got blocked in court, the president tweeted about being mad at a department store for not carrying his daughter's fashion line, the president's counselor subsequently plugged said fashion line on live TV in a seeming violation of ethics laws, the president shook hands with the prime minister of Japan for 19 excruciating seconds, the president hashed out a response to a North Korean missile test at the private club he owns in full view of dozens of patrons, the president's national security advisor resigned amid allegations of contact with the Russian government, and the president reportedly knew about that contact for weeks, according to his press secretary.

This is all a fancy of way of pointing out: yikes, is the news intense these days. It often feels like there's more going on than your brain can hold while keeping other day-to-day interests and pastimes in proper perspective. Hopefully things will slow down someday, but for the time being, following political news feels a bit like riding a roller-coaster with the brakes blown out.