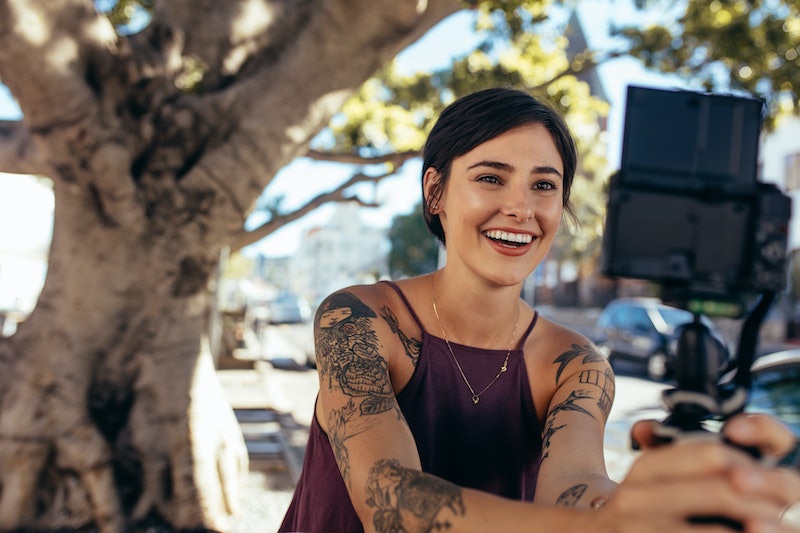 Up until fairly recently, it was considered pretty taboo to have a tattoo, which is why folks tended to get them in hidden locations that could be easily covered with clothes or jewelry. But now, tattoos in general are becoming more accepted, and tattoos in unique locations are even becoming more mainstream.

And that could be for a couple of reasons. "Because of the increasing number of celebrities and athletes who are sporting tattoos now, combined with [sharing] on social media, tattoos are not as 'renegade' and 'rebellious' as they used to appear to be," Leo Palomino, a tattoo artist at Atomic Tattoos in Orlando, tells Bustle. "And people are trying to do something that has a little shock factor to it or trying to stand out or be different." Hence the tattoos in more unique — and usually more visible — locations.

It's great that tattoos are becoming more accepted and celebrated in society, and that people are inspired to try new things. But it's still important to think twice before getting ink in a highly visible part of your body. "You really want to make wise decisions about your tattoo placement," Palomino says, adding that tattoos in a few of the locations listed below still aren't totally acceptable in certain work settings. With that in mind, here are a few "weird" locations that are becoming more mainstream.

More like this
The 10 Biggest Tattoo Trends Of 2023
By Carolyn Steber
This Scandi Beauty Brand Is Basically Hygge In A Bottle
By Justine Knight
Many Skin-Care Actives Degrade By 40% Within 8 Weeks — This Innovative Company Is Fixing That
By Lauren Moison
Bustle Daily Newsletter: November 22, 2022
By Hayley Schueneman
Get Even More From Bustle — Sign Up For The Newsletter