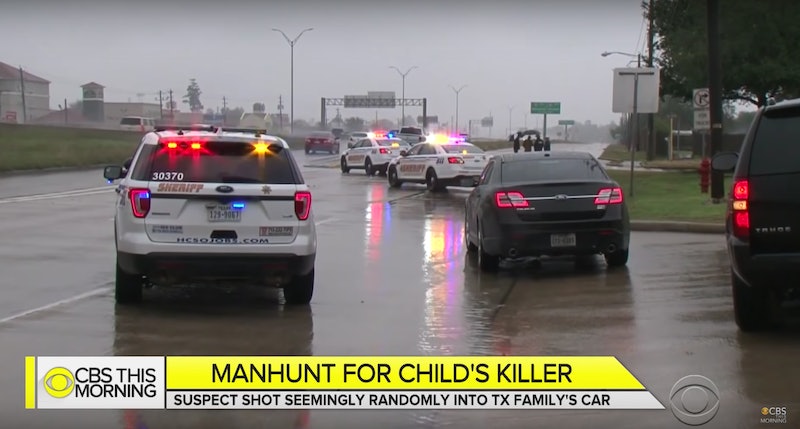 A manhunt is under way for the killer of Jazmine Barnes, the 7-year-old girl fatally shot in Texas on Sunday. Jazmine was killed in a drive-by shooting while in the car with her mother and three sisters, authorities said. No motive has been identified, and her family's supporters are offering a $35,000 reward for information leading to Jazmine's killer.

LaPorsha Washington was driving Jazmine and her three other daughters to a convenience store on Sunday morning to get coffee when, according to the Harris County sheriff's office, somebody driving a red pickup truck pulled up next to the family's car and opened fire into it. NBC News reported that the suspect is a bearded white man in his 40s, according to authorities. Washington noted to KTLA that her windows aren't tinted and that the shooter could see that “it was a mother, a black mother, with four beautiful children, girls, in this car.”

After shooting into the car, the driver pulled up ahead of Washington's family and continued firing, Washington told ABC 13. Jazmine was shot in the head and she died shortly thereafter; Washington took a bullet to the arm trying to shield her Jazmine from the gunfire, while one of her other daughters was injured by the shattered glass, according to KHOU.

According to both Washington and authorities, the attack was entirely unprovoked, and no motive has been named in the incident.

“It just seems to be random,” Harris County Sheriff Ed Gonzalez said at a press conference on Monday. “There is nothing to indicate that the family did anything wrong in any way. They were simply just driving along the service road when this happened to them.” Jazmine told ABC 13 that she "didn't provoke him in any kind of way."

"I replayed this moment in my head over a million times," Washington told KHOU. "Did I see? Did I cut this man off? Did I make a wrong turn in front of him? Did I stop him from getting out of the Walmart, from whatever he was doing, did I do anything wrong to cause this man to fire shots in my car? And I didn’t. I didn’t do anything. I didn’t make a wrong turn. I didn’t get over in his lane. I didn’t do none of that. He fired off at us for no reason. None."

Authorities have released a surveillance photo of the truck in question and asked locals to send in any tips they might have on who it belongs to. In addition, activist Shaun King and civil rights attorney Lee Merritt are offering a $35,000 reward to find Jazmine's killer, according to ABC 13.

Activists have pointed out that Jazmine's killing is similar to another unprovoked shooting of a black Texan in the same area in 2017. A'Vonta Williams was in the car with family members when a pickup truck driver fired into the car, injuring Williams and his girlfriend's grandmother. That incident and Jazmine's killing both unfolded near the same Walmart; however, the Harris County Sheriff's Office told ABC 13 that they don't believe the cases are connected, as the weapon, suspect, and vehicle descriptions are different.