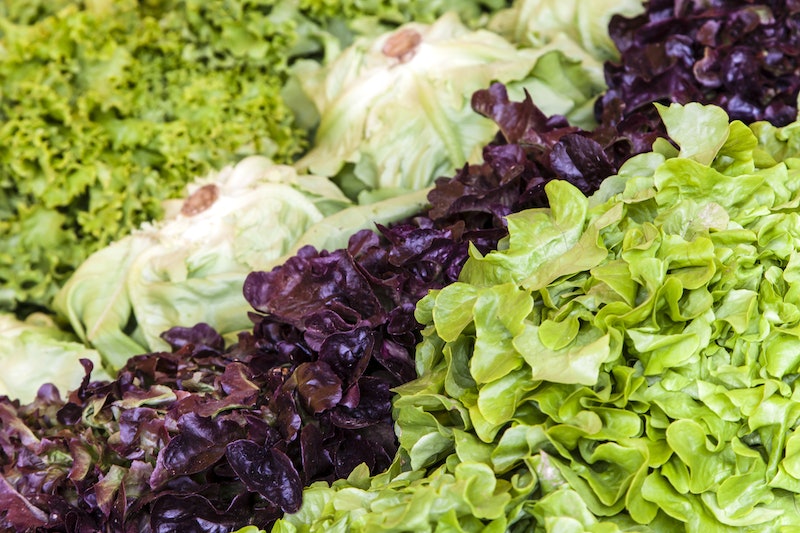 If you've been excited to eat salad before the onslaught of Thanksgiving food next week, you probably want to make sure it won't make you sick. On Nov. 21, the United States Department of Agriculture (USDA) announced Missa Bay, LLC, is voluntary recalling of over 75,000 pounds of salad, following potential E. coli contamination. The salad — Ready Pac chicken Caesar salad — is reportedly linked to 17 cases of E. coli across eight states, CNN reports.

According to the Centers for Disease Control and Prevention (CDC), the E. coli contamination was detected by the the Maryland Department of Health, which tested a package of Ready Pac Foods Bistro® Chicken Caesar Salad from the home of someone who'd fallen ill. After people who'd become ill in Maryland all reported eating that particular salad, the Maryland Department of Health initiated testing. The CDC does not believe that the contamination is limited to the state of Maryland, however. According to the USDA, the batches of lettuce potentially containing E. coli were shipped to the following states: Alabama, Connecticut, Florida, Georgia, Illinois, Indiana, Louisiana, Maine, Maryland, Massachusetts, Michigan, Minnesota, Mississippi, Missouri, New Jersey, New York, North Carolina, Ohio, Pennsylvania, South Carolina, Virginia, and Wisconsin.

The 17 people affected so far by the outbreak were from eight of those states. Seven of these people have been hospitalized, the CDC says, and no deaths have been reported. According to the USDA, people infected with this particular strain of E. coli often develop bloody diarrhea and vomiting. If you think you've been infected with E. coli from the contaminated lettuce, the USDA advises going to your doctor to get tested through a stool sample.

Most people infected with this kind of E. coli recover within a week, and recommends vigorous hydration during this time, while antibiotics are not typically necessary, according to the USDA. In rare cases, however, the USDA reports that the infection might become so severe that you might need to check in to a hospital.

To make sure that you don't get sick from these products, the CDC advises that you don't eat and throw out Ready Pac chicken Caesar salad with "use by" dates that range from Oct. 29, 2019 through Nov. 1, 2019. If you do start presenting with symptoms like diarrhea or vomiting, the CDC recommends talking to your healthcare provider and establishing a journal of what you ate for the past week. Hopefully, you'll be able to stay illness-free as you journey into Thanksgiving week, with or without pre-packaged salad.

More like this
How To Make The Watermelon, Feta, & Mint Salad Trending On TikTok
By Emma Garza
Starbucks Released New Menu Items For The Summer
By Emma Garza
A Beginner's Guide To Drinking Whiskey
By Alexis Morillo
Jennifer Aniston Spoke Out About *That* Viral TikTok
By El Hunt
Get Even More From Bustle — Sign Up For The Newsletter