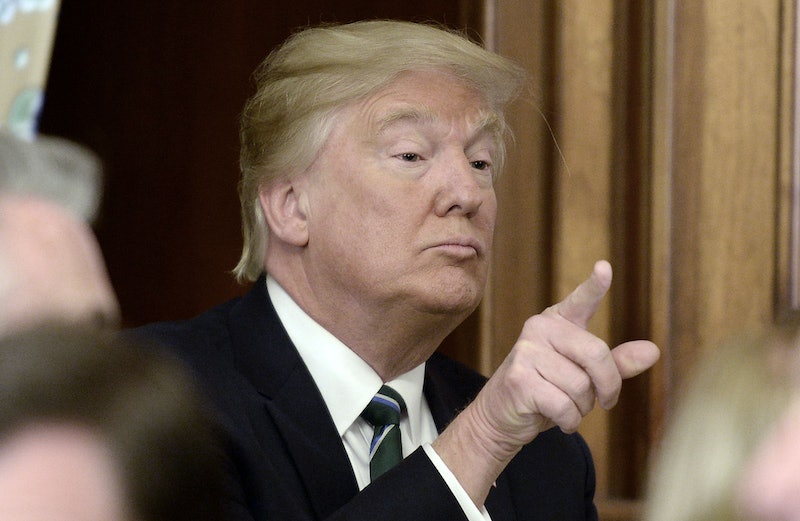 Much of the day-to-day focus on Donald Trump revolves around his contentious personality, uncensored and often poorly-spelled tweets, and controversial soundbites from various interviews with the press. Once that coverage is aired for public consumption, the internet takes on the responsibility of turning those statements into undeniably funny memes and opportunities for analyses and banter. And while the humor is worth checking out, there needs to be a consistent and aggressive effort to keep your eyes on the dangerous bills Trump has introduced during his presidency so far.

Since Trump took office in January, around 2,000 bills have been introduced in the Congress. While passage of these bills might have seemed improbable under a different administration, they appear to have a much stronger chance for acceptance since the Congress is presently and solidly led by the Republican Party, whose most blatant right-wing ideology is exemplified in these bills.

Out of those 2,000 bills, there are eight that are exceptionally devastating, given what they aim to target, defund, terminate, or repeal. Although many Americans must know of these bills, some may remain unaware of the specific demands within them and the potential consequences they carry. These are the eight bills every American should keep an eye on.

1. HR 899: Terminate The Department Of Education

Introduced by Kentucky Rep. Thomas Massie, this bill aims to terminate the U.S. Department of Education by December 2018. It is a one-line bill that fails to account for the allotment of grants for public education, salary for staff, and more.

This bill, like HR 899, contains one sentence, but is sponsored by Florida Rep. Matt Gaetz. It simply demands the termination of the Environmental Protection Agency and offers no answers for the various environmental regulations that the EPA has established since 1970 as well as no solutions for staffers or its budget.

This bill was introduced by Rep. Don Young from Alaska. The bill expresses disagreement with a rule introduced by the Department of Interior that prohibits hunting for sport in the Alaska National Wildlife Refuge. It is worth noting that Young represents a state where many hunt for sport. This bill is awaiting action in the Senate.

Tennessee Rep. Diane Black introduced this bill, which calls for the prevention of federal grants for Planned Parenthood for a year unless it vows that it will not perform abortions. This bill is an example of the Republicans' spectacular failure to acknowledge to the public that federal grants never go to abortions due to the Hyde Amendment, which has been in place for decades now. Furthermore, only 3 percent of Planned Parenthood resources facilitate abortions. The majority of funding is centered on providing low-income women with affordable contraceptive care, mammograms, and STD tests.

HR 147 was introduced by Arizona Rep. Trent Franks. It calls for the imposition of criminal penalties on people who "knowingly or unknowingly" perform an abortion that is based on "the sex, gender, color or race of the child, or the race of a parent."

Critics of the bill, like The National Asian Pacific American Women's Forum, have spoken against it by claiming HR 147 targets Asian-American women "based on false stereotyping regarding sex-preference" and undermines their access to safe reproductive care. Furthermore, by prohibiting "race-based" abortions, the bill endangers the lives of women of color seeking abortions, according to NAPAWF.

This bill, introduced by Pennsylvania Rep. Lou Barletta, calls for the elimination of federal funding for all sanctuary cities that refuse to comply with Trump's immigration policies for up to a year. This would include New York City, Los Angeles, and San Francisco, which have openly refused to obey some of Trump's more aggressive plans to deport undocumented immigrants.

Iowa Rep. Steve King introduced this bill, carrying nationwide consequences, for right-to-work laws in some states. At this moment, 28 states give workers choice to union memberships, according to the National Conference of State Legislatures. But, under this bill, the power to decide will be handed to the federal government instead. Congressional Democrats have described the bill as a "backdoor attempt at bankrupting labor unions." According to the American Federation of Labor and Congress of Industrial Organizations — which cites findings from the Bureau of Labor Statistics, the U.S. Census Bureau among other reports — states with right-to-work laws have lower wages, health insurance coverage, and higher power poverty as well as infant mortality rates.

This bill, also introduced by King along with three Republican co-sponsors, aims to change how federal tax dollars are distributed for educational spending. The bill aims to repeal the Elementary and Secondary Education Act of 1965, which ensures equal opportunity in education, including students with special needs. Under this bill, a portion of grants are required to go into voucher programs for private and home schools, thereby gutting public schools. A detailed report by NPR shows that American public schools already suffer a money problem.

Many times bills fail to make it into law. But with a Congress led by such a vociferously Republican sentiment, it is important to remain aware of these bills and, most importantly, the polarizing and damaging philosophy that builds their foundations. From weakening environmental protection to mobilizing against sanctuary cities, these bills will affect Americans — and not in a good way. But you can still influence their passage by calling 202-224-3121, the United States Capitol switchboard.

Ask for your representative and demand that they vote no.