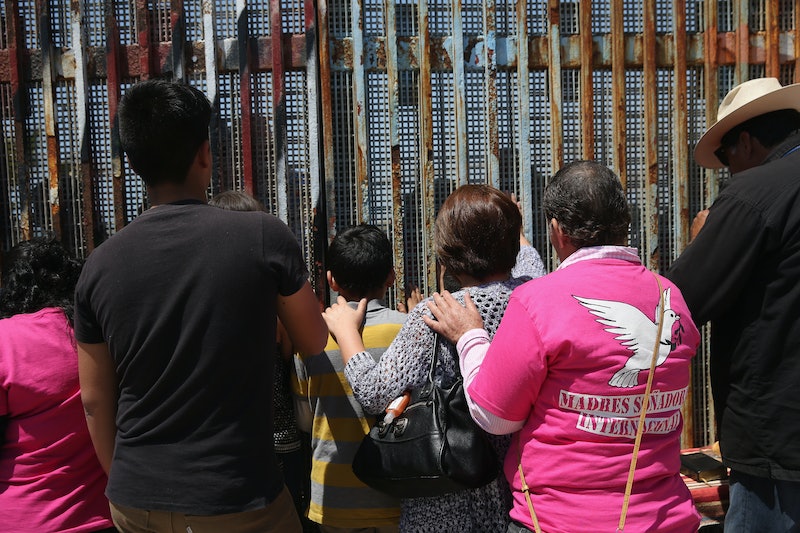 During Donald Trump's first weeks in office, a number of jarring changes have taken place in the country that threatens the livelihoods of people from all walks of life. Some of the largest and most-publicized actions taken since Trump moved into the White House are those that specifically target immigrants — first with people from Muslim countries, and now with undocumented people under the recent Immigration and Custom Enforcement raids. Times are dark right now, but there are many ways you can help people targeted by ICE raids with your dollars, your time, and your voice.

While Trump's contentious immigration ban came down via executive order, the recent spate ICE raids were the result of seemingly routine immigration checks, but with an added intensity many attribute to the new administration. The week of Feb. 6, almost 700 people were arrested under suspicion of being in the country illegally. People all across the country have been arrested and are now facing deportation under what ICE refers to as "fugitive enforcement operations." These types of raids are unfortunately commonplace — in ICE's fact sheet on the most recent arrests, they list five such operations that took place while Barack Obama was president, all of which resulted in more than 1,000 arrests each.

The severity of these deportations and the seeming witch hunt mentality of Trump's stance on immigration make this first raid during his presidency seem all the more extreme. Below are several ways you can fight back and help combat the anti-immigrant climate.

Get Involved With Your Local Pro-Immigrant Org

There are a number of organizations out there dedicated to supporting undocumented people and those who benefited from the Deferred Action for Childhood Arrivals policy, an Obama-era order that defers action on deportation for people who came to the country as children.

With the widespread fear that Trump may overturn DACA, getting involved with a local affiliate of United We Dream, a nationwide undocumented support network, is a great place to learn about specific local measures you can take to help undocumented folks. The National Immigration Law Center is another excellent resource to help find local organizations that support undocumented people.

Lobby Your Officials To Make Your City A Sanctuary

In spite of Trump's threats to "defund" California for becoming a "sanctuary state," the sanctuary city movement has never been so popular. The term itself can be somewhat misleading — "sanctuary city" describes cities that refuse to call ICE on their undocumented residents, but there is no legal protection when and if ICE comes knocking. All the same, this public act of civil disobedience on the part of elected officials symbolizes that a city is not in cooperation with the administration, and adds a measure of safety in the lives of undocumented people.

One of the more heartwarming results of the recent ICE raids has been the widespread proliferation of "know your rights" information. Organizations like the American Civil Liberties Union, United We Dream, and the National Immigration Law Center all have printable information in multiple languages that gives a how-to list of what to do if immigration comes to the door.

Print these out and post them around your neighborhood, campus, or any other high-traffic area where people are likely to see it.

Put Your Money Where Your Mouth Is

If you have the money to spare, consider giving it to local and regional organizations that offer free legal counsel to undocumented people. While donations to the ACLU have skyrocketed in the wake of Trump's immigration ban, there are tons of local orgs that are in desperate need of funds so that they can address the needs of your community.

The Immigration Advocates Network has an excellent legal directory that allows you to search for pro-immigrant nonprofits by state and zip code.

With the rapid-fire release of Trump's executive orders and the steady stream of bad news coming out of Congress, it's easy to become misinformed about the growing difficulties facing our most vulnerable communities. That's why it's more important now than ever to not just be aware of what Congress and the White House (and the police) are doing, but to learn how to read between the lines.

If you're unsure of the meaning or implications of the legalese in an executive order or bill, especially those that will immediately affect peoples' lives, take time to research just what those documents are saying. It might be startling, but it will also help you grasp the bigger picture.

In 2013, ThinkProgress reported that there were 267,000 undocumented LGBTQ people in the U.S., and that number has likely grown since. If you're involved in LGBTQ organizing, make sure that the rights of undocumented people and all immigrants are centered in your activism, because leaving that crucial intersection out could mean the difference between deportation and being able to stay in the U.S. for an undocumented queer or trans person.

Bring Your Community Into The Resistance

The election of Trump has created more first-time activists than anyone could have imagined, and now is the best time to speak to friends, family, colleagues, and classmates who may be sympathetic to the cause of undocumented people targeted by ICE.

You can casually bring up the sanctuary movement over dinner, or send them interviews with victims of the ICE raids. Word-of-mouth remains the strongest component of grassroots activism, and you can turn your community into its own group of activists by working with your friends and family.

With raid rumors spreading like wildfire across social media, it's important to remember to not panic. Whether or not members of your immediate community are affected, it's much harder to think through any stressful situation while in fight-or-flight mode, and unless you yourself are undocumented, you won't be in any immediate danger. Remaining calm and ready to help is one of the best ways to assuage the fears of those who will be the likely targets of the next nationwide raids, and your calm action will help much more than a panicked reaction.

These are terrifying times we're living in, but having a plan of action in place to help your undocumented neighbors and all those who have been or will be targeted by this administration is the best way to resist the scapegoating of immigrants under Trump's regime.