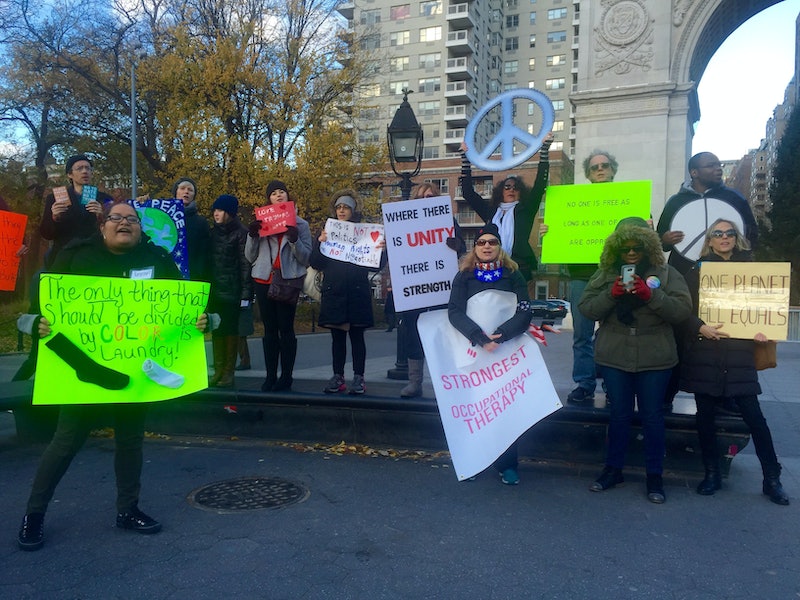 Shortly after Donald Trump won the U.S. presidential election, the Loyal White Knights of the Klu Klux Klan announced that they would be holding a victory party for him near their headquarters in Pelham, North Carolina on Dec. 3. In response, protests against the Loyal White Knights were organized in Pelham, Durham, and Charlotte, North Carolina, as well as in New York City.

The Loyal White Knights protest reportedly was a scattered mess. The group reportedly switched locations back and forth, according to VICE. Local reporter Natalie A. Janicello tweeted that the group's spokesperson told her the parade "has been canceled" and the "bottom fell out of it."

Thousands of miles away from the reportedly failed demonstration, nearly a hundred people (by my estimate) had gathered in downtown Manhattan for what was called the Love & Equality Rally. According to the Facebook page for the group, the goal was to "hold a PEACEFUL rally in NYC on the same day [of the Loyal White Knights parade] celebrating love and equality."

The Love & Equality Rally's mission was to promote the acceptance of all people regardless of race, gender identity, sexuality, ability, religion, or citizenship, along with protesting against the Klu Klux Klan and Trump himself, according to the rally's main organizer, Yeireline Rodriguez, 26. "We are a city, we are a state made up of beautiful people. I can never feel more sure of that than right now, looking at all of you," Rodriguez told the crowd. "This is the America that we know."

Throughout the rally, marchers chanted "Love, not hate, makes America great" while holding up giant peace signs and colorful posters about unity, equality, and respect for all Americans. Phrases like "love wins" and "love trumps hate" have become a popular slogan against hate crimes.

"Love Is Love" Means To Stick Together, No Matter What

"Love is love, no matter what type of adversity we're going to face, we're going to be together. This movement is one of unity. It just seems like generation after generation, we have to fight the same oppression. You have elitists, you have bigots, you have racists. But at the same time, we've also had freedom riders, civil rights activists. You still have the people willing to fight for one another and protecting human rights. That's what 'love is love' is, and it doesn't matter what face it comes from."

"Love Is Love" Means To Be A Powerful Force

"It's an experience, it's a drive, it's everything. And I think it should pretty much rule the world. I think love comes in all forms, not just heterosexual. I think that is pretty amazing."

"Love Is Love" Means To Believe In Yourself

"I got a serious injury and what I most wanted to do was to heal, get therapy, go to school and get a job supporting myself and helping other people. that was foremost in my mind. But I was told that I was too disabled to be a therapist, that I should be a waitress. instead. That's what the doctor told me at the department of vocation and rehab. I said, well if you don't want to help me, I'll just do it myself. Took me 12 years. I worked my way through school, minimum wage jobs, and I have the job that I love. I'm an occupational therapist now for over 20 years.

I was told that I wasn't equal...I never had a doubt in my mind about myself. I had a lot of good, healthy self-esteem. I used to take care of my family, my sister when she was sick. I'd go and run and help her with her children. So, I always had good self-esteem. I never had a doubt in my mind. And when people would put me down and tell me I had too much of a disability, I actually felt sorry for them. I thought, someday, I'm going to be more successful than they are. I consider myself successful, I have a job I love, I make enough money to support myself and help my family. Both my sisters passed away, and I'm helping my one sister with her four children."

"Love Is Love" Means To Feel Connected With Other People

"I was shocked by this election because I couldn't believe there was so many people so full of hate. I should've known better. Here I am, 75, a lesbian who's been with her partner (Joan Waitkevicz, below) for 44 years. I thought the world had really changed and people got used to differences... I think 'love is love' is the opposition. We gotta get over it. We gotta feel empathy. We gotta feel connection with our neighbors, and the reality is we're all different. There's all kinds of people. This is America and that's our strength. If we want to make America great, we're great because of all the different people that live here."

"Love Is Love" Means To Not Sexually Shame Others

"I think that so many tragedies in this world happen because of sexual shaming of people who are sexually non-conforming. Depending on where you are, that could be a lesbian, gay, bisexual, a trans kid. That could be a girl who has sex before marriage. That could be somebody who gets pregnant and is not offered the option to have an abortion, whose parents consider her pregnancy to be punishment for what she did. Sexual shaming never turns out well. It never gives rise to love. And if you love your child, you should not shame them sexually. You should watch out for them, you should show them what's shame, and you should help them to make wholesome decisions. But never, ever shame them."

"Love Is Love" Means To Love How We Want

"'Love is love' means to me that we all should be able to love how we want, and there's nothing wrong with any kind of love. Love is going to save our planet."

"To me, 'love is love' means that my friends and family and anyone who might love someone is able to love them, freely and willingly. No one is telling them that that's not okay. They can be celebrated for their differences and appreciated for who they are."