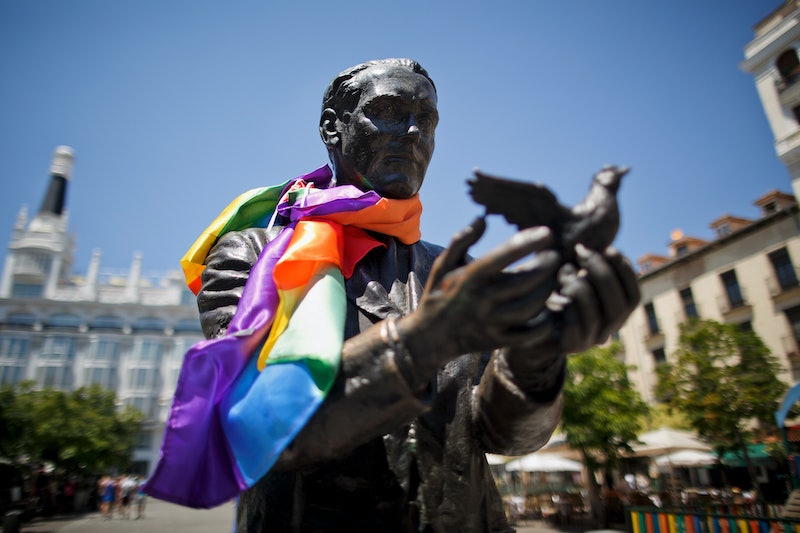 Queer people have always shaped world history, even if historians have often been wary of talking about it. From ancient LGBTQ history, when Roman Emperor Hadrian built a city for his partner, Antinous, after the young man drowned in the Nile in AD 130, to more modern times, when Spanish poet Federico Garcia Lorca (seen in the statue above) brought his poetry into a world overrun by fascist ideology, there is a lot that's been left out of the history books. Fortunately, LGBTQ history podcasts are stepping in to fill the gap, and these eight picks can help you broaden your knowledge.

While a lot of queer-related history has been outside the mainstream for a long time, there's an increasing appetite for it. Shows and films like Pride, about how an LGBT society helped striking Welsh miners under Margaret Thatcher's government in the UK, and Ryan Murphy's Pose, about the NYC queer ball scene in the '80s, have been hits — and speak to how much modern queer people want to know where their community came from. That's the only way to see the momentous achievements we've achieved and how far we still have to go. Tune into these podcasts to dive into the rich world of LGBTQ history.

More like this
The 19 Best Tweets & Memes About Bisexual Awareness Week
By Lexi Inks
26 Ghost Story Podcasts To Get You Ready For Halloween
By Jessica Booth, Mia Mercado, JR Thorpe and Emma Carey
An Honest Review of MeUndies Boxers, According To A Non-Binary Person
By Megan Lasher
Pro Footballer Zander Murray Is "Blown Away" By Support After Coming Out
By Sam Ramsden
Get Even More From Bustle — Sign Up For The Newsletter