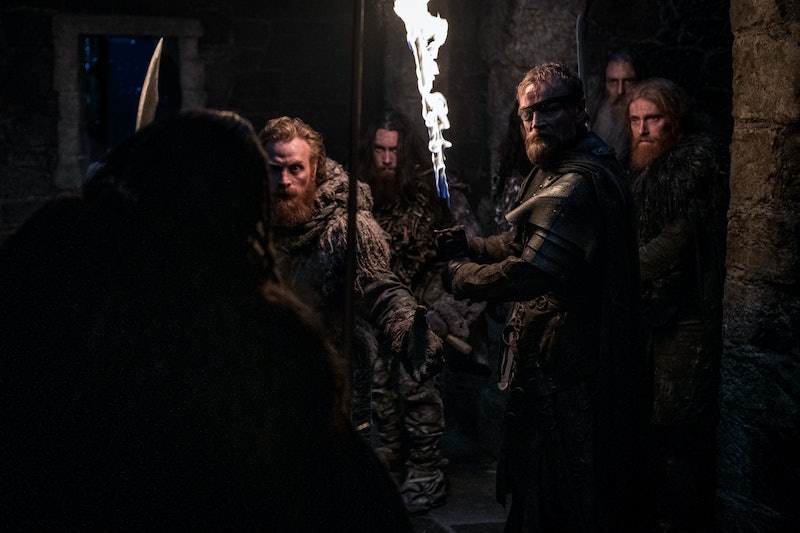 Sure, there were some dramatic moments, heartfelt callbacks to Season 1, and scary scenes in the premiere, but the episode itself was actually pretty full of jokes — heck, the first spoken dialogue was Tyrion making eunuch jokes at the expense of Lord Varys. Add that to all of shade thrown, Gendry and Arya's rom-com flirtations, as well as Sam's epic pratfall in the tombs, and Game of Thrones may have to compete in the "Musical or Comedy" category at the Golden Globes next year.

Here are some of the biggest one-liner jokes that social media latched on to in the premiere episode. Almost every character got their shot at a witty remark of some point, which is truly impressive given how many there are. These are the funny moments you're going to want to replay this week, over and over.

Daenerys With The Nerve To Snark Sansa Stark

It's fair question, Khaleesi! You're not going to make it far in the North, or Westeros in general, if you insist upon making not-so-vaguely threatening jokes about your "children" eating whatever they want, OK?

(But also, kinda funny. No judgement if you laughed.)

Jon Snow knows nothing, Drogon... not so much. Yikes!

"It had its moments," says Sansa to her once husband, Tyrion Lannister.

Even Jon & Arya's emotional reunion had jokes. "How did you survive a knife to the heart," Arya asks her half-brother (cousin) at the Weirwood tree. "I didn't," he says. Gotta love that sardonic Northern dry humor.

On a more serious note, the woman who saved Jon Snow's life has been featured on Arya's kill list. Melisandre took Gendry, and Arya vowed to kill her. She's not the only one that wants the Red Woman dead, but still, keep that in mind as Season 8 progresses.

Dragons, shmagons. Honestly, who wasn't lowkey looking forward to elephants? Everyone knows that the Oliphaunts in Lord of The Rings are the best part of Return of the King. Who cares that they can't travel by boat — make it work!

Was "I've always had blue eyes" the funniest moment in the episode, or were we all just desperate for something to break the tension in the aftermath of that White Walker attack? Even the scariest part of the episode was broken up with a lighter moment. Good old Tormund. You can always count on him for a laugh.

Fans truly went on a journey, wondering why Bran was being so creepy in Winterfell, only to realize he was setting up one of the greatest reveals of all time when Jaime Lannister (you know, the reason he's in a wheelchair in the first place) arrives in Winterfell and sees him, alive.

"I'm waiting for an old friend," he says to Sam. Very Gandalf of him, to reference Lord of the Rings a second time, but also very funny.

From the looks of next week's episode, we may not get as many funny moments. This was the calm before the storm. However, knowing Game of Thrones, there may at least be some dark humor ahead.