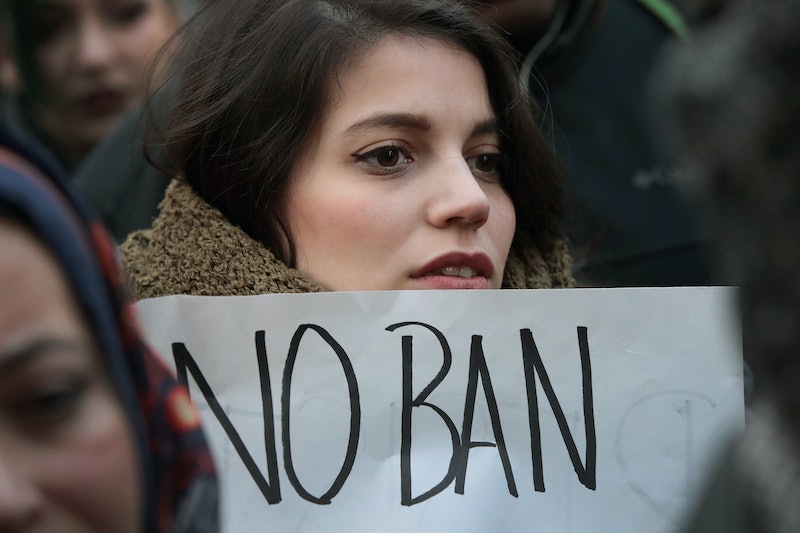 If you aren't a supporter of President Trump, it's easy to feel pretty demoralized right now. The real estate tycoon has proven that, contrary to the claims of some pundits, we should have taken him literally and seriously during the campaign, as he's doing just about everything he said he was going to do (other than #DrainTheSwamp; the swamp, in fact, remains clogged). But don't feel too down — despite how it may seem, the truth is that progressives have had some big victories since Trump won, and it's worth taking a moment to reflect on them.

The anti-Trump protest movement (or #TheResistance, as some members have started calling it) kicked off in earnest almost immediately after Trump was inaugurated, with the Women's March attracting over two million demonstrators nationwide (and even more around the globe). It's only become stronger since then, as evidenced by the spontaneous outbreak of major protests across the country over the weekend in response to Trump's travel ban.

There's still a lot of work to do. Not all of these battles have been won, not all of them will be won, and Trump still has four years left in his term. Nevertheless, there have been some strong signs lately that protests and boycotts can actually work if they're targeted at the right people. Here are a couple of recent ones that have.

Saving The Office Of Congressional Ethics

Congressional Democrats are one of the last counterbalances to Trump in the federal government, and their ability to keep his administration in check will play a great role in determining how much of his agenda he's able to enact. But before Trump was inaugurated, House Republicans announced a plan to gut the Office of Congressional Ethics — thus removing one of the few tools Democrats have to investigate and expose potential wrongdoing in the Trump administration.

However, Republicans reversed themselves and decided to preserve the ethics office after a wave of negative press — and more importantly, angry phone calls to their offices.

The Women's March on Washington, held the day after Trump's inauguration, didn't have any direct effect on government policy, yet it would be disingenuous to call it anything other than a smashing success for progressives. It came together astonishingly quickly, demonstrating the passion behind the movement. It was non-violent, which is good for PR. And it was impossible to ignore: Experts believe the march drew around three times as many people as Trump's inauguration, though the exact crowd numbers can't be proven.

Although protests aren't an end unto themselves, the fact that the anti-Trump movement was able to coalesce into such a unified display of opposition just a day into the new presidency was a huge morale boost to many of those who will be on the front lines against Trump.

Chipping Away At The Travel Ban

To be sure, this can only count as a partial victory, as the legal battle of the travel ban is far from over. But things have been trending in progressives' favor more or less unabated since the administration rolled out the ban.

First, Trump scrapped a central component of the policy following nationwide protests, announcing Thursday that green card holders would be exempt from the ban. Then, a series of court rulings resulted in the entire ban being temporarily blocked. There's still more work to do, but the needle has moved in the right direction, and it's hard to imagine that it would have if Americans across the country hadn't protested as vigorously and visibly as they did.

Getting Uber Out Of The Trump Administration

As demonstrations against the Muslim ban were getting underway, Uber became subject to a massive protest. This was in part because it refused to join a taxi union's strike against the ban, but more broadly because the company's CEO is on one of Trump's economic advisory councils.

Well, at least he was: Uber CEO Travis Kalanick announced Thursday that, in light of pressure both from within and without the company, he is no longer advising Trump. Although some see value in having non-ideologues like Kalanick in Trump's cabinet, the image of a high-profile CEO collaborating with the administration was helping to normalize Trump, and reversing that normalizing is in every progressives' interest.

This went a bit under the radar, but GOP Rep. Jason Chaffetz introduced a bill in January that would sell off wide swaths of "excess" public lands to private owners. This would have resulted in 3.3 million acres of preserved natural land — including forests and mountains that are home to several endangered species — being stripped of federal protections and sold off to the highest bidder.

However, Chaffetz yanked the bill after — you guessed it — public protests against the legislation forced him to back down.

One of the biggest hubs of pro-Trump support is the alt-right website Breitbart: it consistently boosted Trump in the primary, publishes flagrantly misogynistic and racially-insensitive articles, and whose former news chief is now Trump's top adviser.

But thanks to a sustained boycott from the activist group Sleeping Giants, Breitbart is losing advertisers left and right. The organization, which seeks to "stop racist websites by stopping their ad dollars," reports that 818 companies have stopped advertising on Breitbart due to public pressure.

This also only counts as a partial victory, but it was a victory nonetheless. During the last few days of the Affordable Care Act's open enrollment period, the Trump administration announced that it was canceling all federal advertisements encouraging people to sign up for Obamacare. But according to The Washington Post, Trump officials were "startled by a backlash that built swiftly on social media among proponents of the health-care law," and retracted its directive less than 24 hours later.

To be sure, Trump still did scale down ACA ads in the final days of the signup period, which may have resulted in fewer people signing up that otherwise would have. Nevertheless, the fact that social media activism effectively reversed a federal policy in less than a day is remarkable, and a strong sign that the tactic will be potent under the Trump administration. For progressive activists, this is very encouraging news.

There's a lot to say about the protests at UC Berkeley on Wednesday, which became violent and ultimately forced the administration to cancel a planned appearance by Breitbart editor Milo Yiannopoulos. What's indisputable, though, is that the protesting worked, and Yiannopoulos — who was permanently banned from Twitter for coordinating a harassment campaign against Leslie Jones — wasn't given a platform at the university. Given that he publicly harassed a trans student at an earlier university speech, this is a good thing.

Of course, the Trump administration is still young, and there will be many more battles to come. But make no mistake: Progressives resisting Trump's agenda have had a great first two weeks.