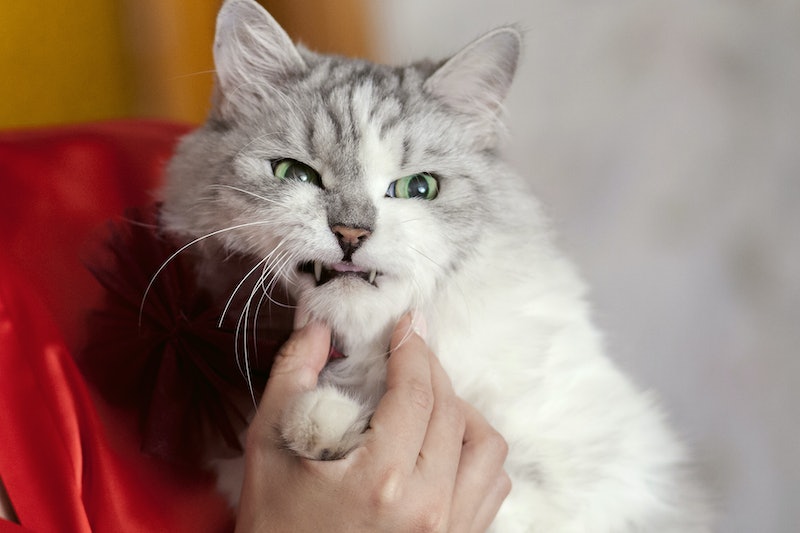 Our pets have distinct personalities and emotions, and they aren't afraid to show these off. So, it's not surprising that they can also sometimes get mad at you. If you own a cat, you probably know that these little guys can sometimes seem like they want to start a fight with you, which can be slightly scary — a cat scratch hurts! You might be trained to look out for the typical warning signs: they start growling or hissing, making a low noise that clearly shows they're feeling threatened or angry, and they might bare their teeth. You probably also look out for the typical Halloween cat stance, when their fur stands up and their back arches. But these aren't the only ways to tell if your cat is in a mood — there are some other signs that your cat is secretly mad at you that you might be overlooking.

First, though, it's important to understand that cats probably aren't actually angry with you in a vengeful way. Cats are super sensitive creatures and can react negatively when something changes in the environment they're used to. So, if you put them somewhere new, start feeding them different food, bring them to the vet when they hate the car, or introduce a new pet, they may seem miffed at you, but they're probably just generally mad about the situation.

And, like other animals, cats will respond in an "angry" way when they feel threatened or scared. In some instances, if your cat is doing these things, it might be because they're afraid, not just angry. Here's how to tell:

More like this
The 4 Best No-Scratch Sprays For Cats
By Masha Vapnitchnaia
The 8 Best Collars For Cats Who Hate Collars, According To A Vet
By Lauren Moison
The 4 Best Food Bowls For Dogs With No Teeth, According To Experts
By Maria Cassano
June’s New Moon In Cancer Will Affect These 4 Zodiac Signs The Most
By Brittany Beringer
Get Even More From Bustle — Sign Up For The Newsletter