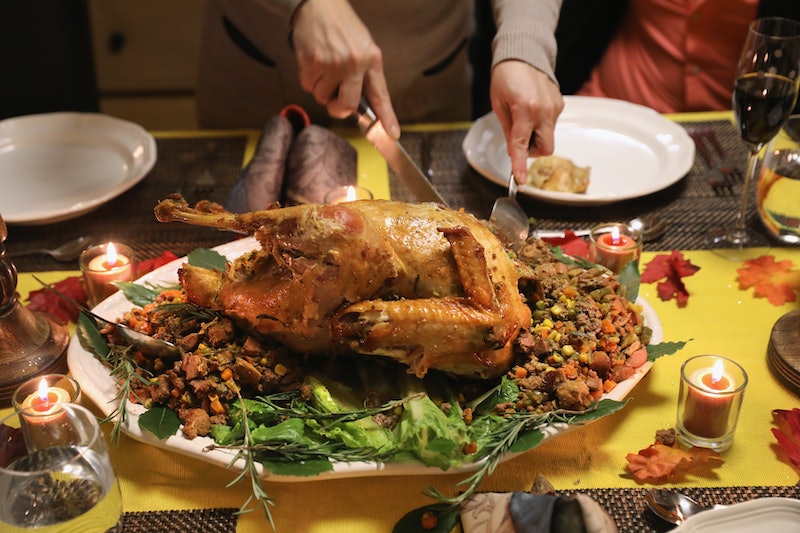 Thanksgiving is right around the corner, if you can believe it. And given that the day is pretty much all about gathering around the dinner table, you might be starting to wax nostalgic about your favorite holiday meal. If there was ever a time to revel in pumpkin pie spice, this is it, folks. But you may not have realized that your favorite Thanksgiving foods can cause inflammation, which can potentially lead to other ill effects in the body.

“I hate to say it, but when you’re talking pro-inflammatory foods, stuffing made with bread, butter, and gravy/giblets is pretty high on the list,” Dr. Darria Long Gillespie, Harvard and Yale-trained ER doctor and author of Mom Hacks tells Bustle via email. "Since most of the bread used for stuffing is either white bread or highly processed wheat versions, they’ll quickly break down into simple sugars in the bloodstream," which can lead to inflammation.

It's also important to note that acute inflammation in the body can be a good thing, as it helps speed up wound healing and helps prevent infections, according to Vanderbilt University School of Medicine. That said, health problems can set in when inflammation becomes chronic, meaning that your immune system acts like it's in a constant state of response and attacks healthy tissue, rather than potential sources of infection, according to Harvard Health. Medical News Today reports that chronic inflammation may be the root cause of myriad health problems from digestive illnesses, arthritis, autoimmune conditions, and some cancers. By avoiding inflammation-causing foods when you can, you can help protect your body against many illnesses.

While a fear of inflammation should definitely not keep you from enjoying your holiday meal, if you are concerned about it, you have options. Here are eight inflammation-causing Thanksgiving foods that you might want to take note of before the festivities begin.