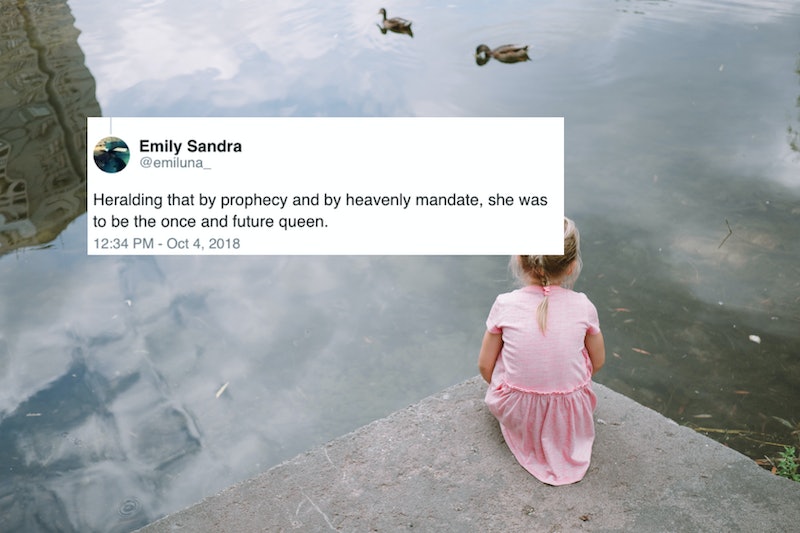 The world may be terrible, but there is one tiny spot of light in it right now: Saga Vanecek, an 8-year-old girl who found a sword in a Swedish lake over the summer. Saga is clearly meant to be our sovereign ruler, because, I mean… she pulled a sword out of a lake. What’s more, the sword is a historically significant find; it’s believed to date back to the pre-Viking era.

Also, her name is Saga. How perfect is that?

According to Swedish-English newspaper The Local, Saga, who had grown up in Minnesota but had recently relocated with her family to Sweden to be closer to relatives, was spending time at her family’s summer house by the Vidöstern lake in Tånnö, Småland several months ago. She was playing in the water one day when she made a surprising discovery — something that looked like, but definitely was not, a stick.

In Saga’s words, per The Local:

“I picked it up and was going to drop it back in the water, but it had a handle, and I saw that it was a little bit pointy at the end and all rusty. I held it up in the air and I said 'Daddy, I found a sword!' When he saw that it bent and was rusty, he came running up and took it.”

And, I mean, that’s fair. Tetanus shots are no fun.

The sword looked like it might be pretty old, so Saga’s dad, Andy Vanecek, first went to the neighbors and asked they what they thought, reported Swedish newspaper Värnamo Nyheter. They agreed, which led Vaneck to check in with a colleague who’s interested in the Middle Ages; Vanecek thought he might know someone with the credentials to take a closer look. Lo and behold, he did — so that’s how Vaneck ended up connecting with archaeologist Annie Rosén of the Jönköping County Museum. The pictures of the sword Vanecek sent Rosén left her so gobsmacked that she cut a vacation short so she could come back to see it in person.

Does this story sound somewhat familiar to you? If it does, that’s probably because something similar happened in the UK last year. In 2017, then-7-year-old Matilda Jones pulled a sword out of Dozmary Pool in Cornwall — Dozmary Pool being the place where, according to Arthurian legend, the sword Excalibur was returned to the Lady of the Lake following Arthur’s death.

I know, right? What are the odds of this happening twice within the space of a year??

But here’s the thing: Matilda’s find, although undeniably impressive, is generally believed to be a replica — possibly a prop leftover from a film shoot. Saga’s, however, is a literal piece of ancient history. According to The Local, the sword was initially believed to be around 1,000 years old; however, this assessment was later revised, with experts now suspecting that it dates back to the 5th or 6th century CE — that is, it’s not Viking. It’s pre-Viking

The sword, which is about 85 centimeters in length and made of wood and metal, was so well preserved that it prompted researchers to carry out a larger search in the area. Since then, a brooch and a coin have also been recovered. No one really knows what any of these items were doing there yet; Mikael Nordström of the Jönköpings Läns Museum told The Local that it’s possible it might have been “a place of sacrifice,” but they don’t know for sure. They’ve ruled out the possibility of the lake being a gravesite for the time being.

Research and conservation efforts are ongoing — Nordström told The Local that it’ll be some time before the sword is available for viewing due to the length and complexity of the conservation process — but in the meantime, folks on Twitter are having a field day with this story. (And, I mean, I can’t blame them; right now, I desperately want Saga to team up with Matilda Jones and rule the world together, because obviously they are destined to do so.) Here are some of the best responses so far:

All Hail The Rightful Queen Of Sweden!

For the curious, Sweden is actually "a constitutional and hereditary monarchy with a parliamentary system." (Thanks, Wikipedia.)

Or Maybe The New Prime Minister!

There's been some, uh, drama over there recently.

Reported The Local, "As for whether Saga will be involved in future projects or receive a reward for her discovery, the case has now been handed over to the National Archives of Sweden, who will be responsible for making the decision."

There's a Monty Python quote for every occasion. (And many, many people are falling back on this one right now.)

Most People Are On Board With It, Though

A lot. Fate has spoken a lot.

Are You Ready To Do Your Part?

She's going to need some sworn protectors and trusted advisors, after all.

We definitely know who to call in the event of a Nazgul attack now.

And Possibly Also Destined For The Iron Throne

In the game of thrones, you win or you die or you are Lyanna Mormont and super badass and definitely going to kick everyone's butts.

Even if you have to take the black for some reason.

I mean... that's... that's an acceptable thing to skip Infinity War for.

Despite all of this, though, it's worth remembering that Saga is an 8-year-old kid, and her own person, and she can do whatever she wants with her life. According to The Local, she has expressed interest in becoming a doctor, a veterinarian, and/or an actor who lives in Paris when she grows up.

More like this
Women Around The World Are Cutting Their Hair In Solidarity With Mahsa Amini
By Darshita Goyal
Why TikTok Is Obsessed With Caesar Salads Right Now
By Alexis Morillo
Behind The Hilarity Of The "POV: You Walk Into My Room" TikTok Trend
By Lexi Inks
TikTok's Butter Board Might Be The New Cheese Plate
By Emma Carey
Get Even More From Bustle — Sign Up For The Newsletter