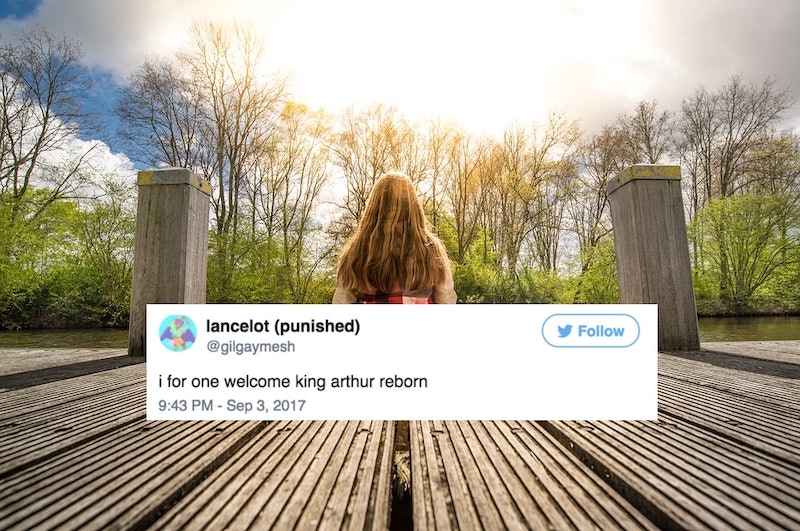 It may seem like the world is collapsing around our ears most of the time these days, but hey, at least we’ve got this 7-year-old girl who pulled a sword out of a lake on whom to place all our hopes and dreams for the future, right? Because seriously, that actually happened: According to the Daily Mail (which, I know, is the Daily Mail, but bear with me), Matilda Jones was vacationing with her family in Cornwall, UK recently when she legit yanked a four-foot sword out of the lake she was paddling in. It gets even better when you consider the fact that the lake from which Matilda pulled the weapon is Dozmary Pool, AKA the one that’s said to be home to the Lady of the Lake — which means it’s where King Arthur’s sword, Excalibur, was laid to rest after Arthur’s death, according to legend. To riff on a now-classic quote, Matilda Jones may not be the hero we deserve, but I’d be willing to bet she’s the hero we need.

The Mail reports that the Jones family, who are from Yorkshire, were on holiday and relaxing by Dozmary Pool when the discovery occurred. Said Matilda’s father, Paul Jones, “It was a blistering hot day and Matilda asked if we could go for a paddle.” He said yes — and then when she was about waist deep, she told him she could see a sword. “I told her not to be silly and it was probably a bit of fencing,” said Jones, “but when I looked down, I realized it was a sword. It was just there [lying] flat on the bottom of the lake.”

Admittedly I’m not super well-versed in Arthurian legend, so take this all with the caveat that I’m not an expert — but according to most versions, after Arthur’s death, one of his knights (usually Griflet or Bedivere — who, fun fact, are cousins) delivers the sword Excalibur to the Lady of the Lake; the knight throws it into the lake, where a hand reaches out from the watery depths and catches it. In some versions (notably in what’s called the Post-Vulgate Cycle, which is one of the Old French prose cycles of the legend), Arthur actually receives Excalibur from the Lady of the Lake as well; rather than Arthur’s pulling the sword from the stone indicating that he is the rightful king and beginning his reign, this version states that the Lady of the Lake gives the sword to him sometime after his reign begins.

In any event, Cornish legend posits that Dozmary Pool is the lake in which the Lady of the Lake once dwelled, so it’s also presumably where Excalibur has been hanging out since Arthur’s death. Alas, though, it’s doubtful that what Matilda found is actually Excalibur — largely because Arthurian legend is, y’know, legend. Additionally, said her father to the Mail, “I don’t think it’s particularly old. It’s probably an old film prop.”

Even so, though, it’s just too perfect. And it seems that I am not the only one who would be willing to bend the knee to Matilda of the House Jones, First of Her Name, the Undrowned, Queen of the Britons and the First Men, Finder of Swords, and Mother of Legend; all these folks are also totally down for it:

Me too, @gilgaymesh. Me too.

Save Excalibur, Save The World

I mean, it's a big responsibility, especially for a 7-year-old, but...

She's Our Only Hope

Also, Her Wardrobe Is On Fleek

I'm not usually a Crocs fan. This, however? This is acceptable.

Where are the trumpets? I feel like we need trumpets for this.

The State Of The World

We are living in a movie right now.

It's going to be magnificent.

But Also, Beware The Trolls

Many, many people have made this joke... although to be fair, I can understand why. Still, though, the correct response to that is definitely this:

Watch Where You Swing That Thing

I mean, she hasn't, and the sword is probably pretty dull (it has been sitting at the bottom of a lake for some time), but bonus points for making my favorite joke related to this story.

Ultimately, no, finding a sword in a lake will not make someone the new ruler of anything... but this story? This story is kind of exactly what many of us needed right now. All hail Queen Matilda of Dozmary Pool!

More like this
This Viral TikTok Trend is Exposing Everyday Scams
By Sophia Moore
American Girl Doll Memes Are Going Viral On Instagram & Tiktok
By Emma Carey
YouTuber Runs Into Margaret Sanger’s Grandson While Filming
By Alexis Morillo
What Is A “Softboy?” The TikTok Term & Aesthetic, Explained
By Courtney Young
Get Even More From Bustle — Sign Up For The Newsletter