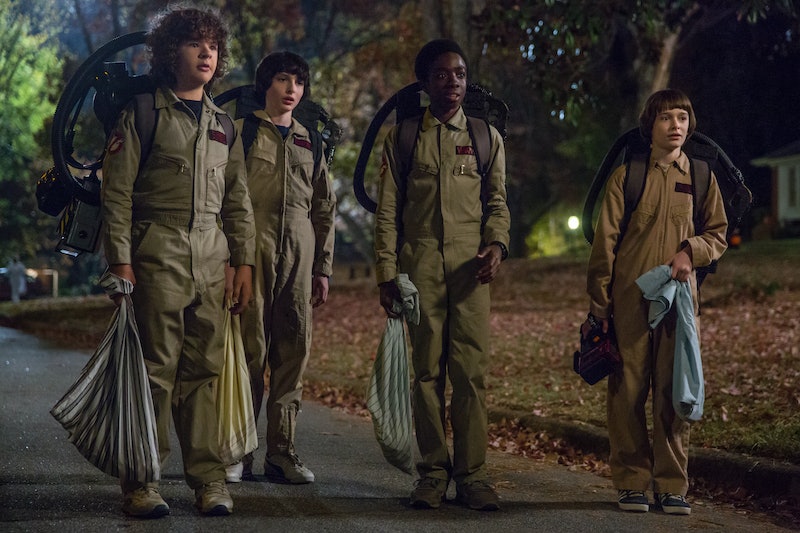 Right now, it feels like we're in a serious '80s pop culture nostalgia moment. October's release of Stranger Things Season 2, set during that decade, comes after a string of 2017 movies giving off major '80s vibes; this summer, there was Charlize Theron's Atomic Blonde, set in 1989 Berlin, stuffed with sexy '80s fashion, and soundtracked with the era's major hits, and shortly before that, Guardians of the Galaxy 2 featured neon twinges and rapid-fire references to '80s entertainment like Knight Rider, He-Man, Cheers, and Pac-Man. An adaptation of Stephen King's '80s-set It hit theaters recently to box-office success, while the trailer for the upcoming Thor: Ragnarok features a lot of the same brightly colored, '80s-inspired mood that Guardians did. So what's going on? Our infatuation with the decade isn't just because everything that goes around, comes around — it actually has a lot to do with the '80s deja vu caused by the world's current, unsteady political climate.

Atomic Blonde, for instance, touches on an ambiance of mistrust and deceit regarding Russia and warfare that, while pegged to '80s politics, feels fully relevant to today. Then there's The Americans; since its premiere in 2013, FX's '80s-set, Russian spy drama has nailed, and oddly predicted, our current political situation. Like today, the '80s also saw a touchy, dangerous relationship between the U.S. and Russia, a former entertainer in the White House, seriously questionable financial practices happening at the hands of major banks, and two-sided culture wars. The era of Ronald Reagan, the rise of the Christian Coalition, the last days of the Cold War, and Wolf of Wall Street-style excessiveness are all suddenly coming back, and the similarities are truly uneasy.

But it's not so sudden, really. This isn't the first time that the '80s have come back into play in pop culture, particularly in film. Just a few years ago, there was a deluge of '80s remakes, sequels, and era-inspired films like TRON: Legacy, Clash of the Titans, The A-Team, The Karate Kid, A Nightmare on Elm Street, Wall Street: Money Never Sleeps, 21 Jump Street, The Smurfs, and Hot Tub Time Machine. But while those movies were remakes or continuations of existing 1980s properties, what's coming out now, (aside from It) don't really fit that mold. Stranger Things, Atomic Blonde and the Marvel films use the ambiance of the '80s in more "original" properties, utilizing the cultural influences, music, colors, and general vibe of the era.

But how come? It's not just the political similarities — it also has a lot to do with who is now making these films. Now that 1980s kids, the Generation Xers whose childhoods took place during the influential era, have started hitting their 30s and 40s, it's felt like the decade of their youth has come back into vogue. These people, such as It director And Muschietti and Marvel Cinematic Universe honcho Kevin Feige, both 44, are finding themselves in positions of power within studios and movie-making machines, not to mention fashion houses and music studios. And so, as adults, they've turned back to what they loved as kids for inspiration, and hey, who can blame them? If you had carte blanche to either green-light or make anything you wanted, wouldn't you play with the toys you loved as a child?

The Duffer Brothers, creators of Stranger Things, have confirmed as much. Though their upbringing was primarily '90s-set, their influences are straight from the decade prior. In an interview with Den of Geek, the 32-year-old twins explained that the reason their series is packed with 1980s easter eggs and references to films like E.T., The Goonies, Poltergeist and more is, "We grew up with movies. That's what we fell in love with and that's what we wanted to do. So we tried to pay homage to a bunch of movies that we grew up loving in the show...these were the things that made us want to do what we're doing."

This attitude makes sense, as plenty of artists would want to turn to the pieces of art that made them fall in love with their mediums for inspiration. That doesn't account for why movies not made by Gen X-ers, like Guardians and Atomic Blonde, make use of '80s-style colors, fashion, and music, but any historian will tell you that all trends are cyclical; arts such as music and fashion are constantly reinventing themselves with inspiration from decades past. The '80s were inspired by the '60s, the '90s in turn the '70s, and so on and so forth. You need only flip on a record by current artists Bleachers, Sky Ferreira, or BØRNS to hear the synth-pop sound popularized in the '80s reused today for mainstream music, or look at Charlize Theron's exquisite Atomic Blonde fashion which, as The Telegraph points out, is pretty much on the racks today in a variety of different ways.

So all those 1980s throwbacks at the movies and on TV you're seeing these days? Part of the nostalgia may simply be because of the fact that '80s kids are growing up and making our entertainment, but part of it is most certainly also due to the eerie coincidence that our current cultural climate and political landscape reflects that era. The stylistic choices are a little less worrisome than the political connections, of course, but hey, with the possibility of nuclear annihilation on the horizon and political mistrust everywhere we look, we're at least getting some sweet synth pop and bright colors along the ride.