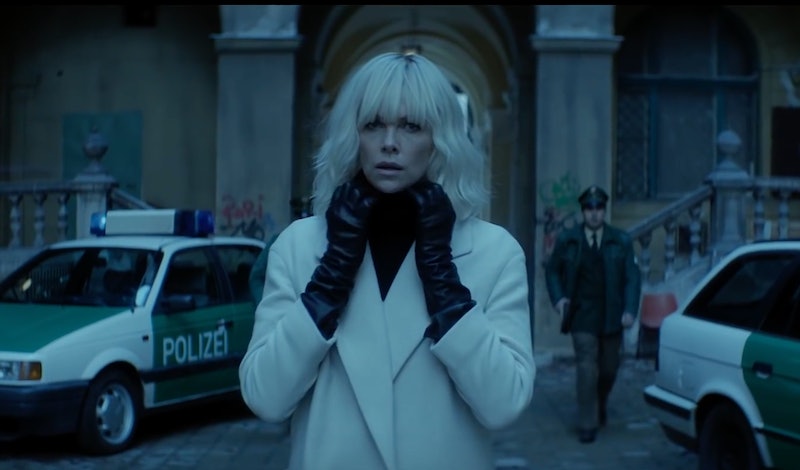 Atomic Blonde hits theaters on Friday, July 28 and it's already being praised due to Charlize Theron's killer — literally — performance. The movie is set in the Cold War, which means its soundtrack is packed with some of the best '80s synth beats from the era. Although it would be appropriate for the Berlin-set film, "We Didn't Start the Fire" is not included on the Atomic Blonde soundtrack, but the songs that did make the cut are moody, intense, and pretty great, if I do say so myself. That's why you'll likely to be listening to the Atomic Blonde soundtrack on repeat all summer long.

In order to fully appreciate the soundtrack, it's helpful to know a little bit about the movie itself to set yourself in full-on spy mode. Theron's character, Lorraine, is being called a female James Bond, but she's also much more than that. The level of badass action in the movie is unusual for female-led films (which are rare enough on their own), and the music plays a huge part in making it clear that this woman isn't playing around. Seeing as Lorraine's kill-spree takes place in Berlin, the film aptly features "99 Luftballoons", but it isn't the original 1984 jam by Nena; it's a remake with a much more somber tone by Kaleida.

Kaleida's "99 Luftballoons" is a fitting song for Atomic Blonde because the movie is much about female power, with Lorraine romancing a female French operative (Sofia Boutella) and kicking many men's asses. And the rest of the soundtrack continues to feature many women's voices, in other songs like 'Til Tuesday's "Voices Carry."

Other classic '80s beats are on the soundtrack too, like A Flock of Seagulls' "I Ran (So Far Away)" and Re-Flex's "The Politics of Dancing." There are also songs by George Michael and David Bowie, so get ready to feel sad about our recent losses of those two geniuses — but also appreciate their many wonderful tunes.

It's also worth mentioning that there's a new Marilyn Manson screamo song with an awesome guitar riff included in the soundtrack as well. Yes, it's that good.

The Atomic Blonde soundtrack is just as exciting as the movie itself, and I suggest listening to it every day to channel your inner secret agent on a cold-blooded mission. You will be stalking down the streets on the way to work in no time.