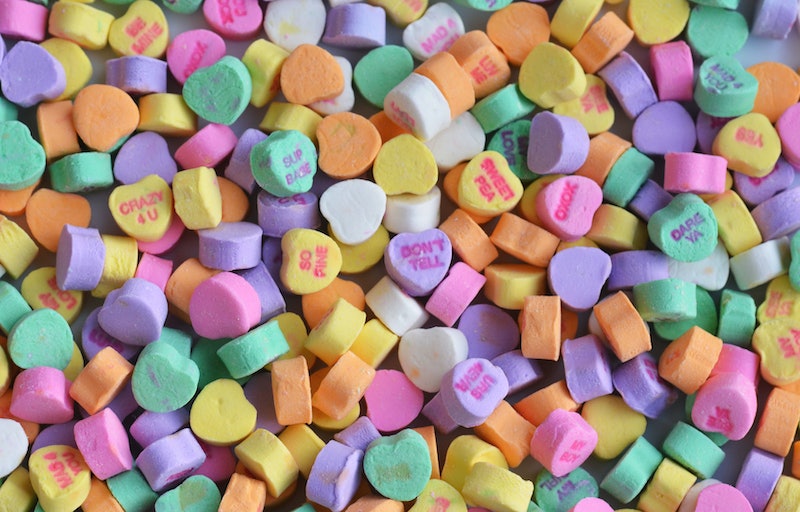 I don't know about you, but as a child who spent approximately 95 percent of the time being awkward AF, I did not look forward to Valentine's Day. There was a veritable smorgasbord of things that could go wrong, from not getting a classroom-rule-required card from every classmate, to super publicly getting your card rejected by your special someone. But these awkward AF things that happened to us as kids on Valentine's Day have bonded us as adults, and here we are on the internet to commiserate over our horrifying grade school memories.

At my school, kids were for the most part pretty cooperative, but on Valentine's Day, anarchy reigned. Our teachers said we had to bring a card for each classmate, but that didn't mean it was going to happen. Of course, there were also countless outside-the-classroom interactions that Valentine's Day could make awkward AF. We're really not limited in our choices, considering being a kid thrown in with a bunch of other kids in a social Hunger Games is possibly the most awkward thing that can be done to us.

Below is a list of grade school Valentine's Day horrors. Read, and remember. (And then treat yourself to some chocolate or a glass of wine, because you so do not need to wait till Valentine's Day for that.)

1. People Spelling Your Name Wrong On Your Card

Nothing says "I barely know who you are but if I don't give you a card I'll get punished" like a glaring misspelling of your name. Especially your first name. Especially if you had a super-common first name. While these misspellings miiiight have been excusable in the first few years of grade school because none of us really knew how to spell anything, in later years it was definitely awkward. There's no easy way to address a misspelling of your name, so if you were like me, you just let it go.

Gather to me, '90s kids. Let us remember the trials we had to go through to make contact with our crushes in the early days. No texting — heck, no cell phones — no email, no AOL Instant Messenger (RIP). Nope, no easy mode for us. We had to go instantly to hardcore mode: Calling our crush's landline from our landline. Which meant that at least once, their parent picked up and you probably stammered out an excuse about homework, and at least once, your parent got caught listening in to your conversation.

3. When Someone Noticeably Did Not Give You A Valentine

The rule-breakers. The teacher-defiers. Sometimes someone hated you so much, you didn't get a school-mandated valentine. And when this happened, they didn't just walk by your desk during valentine handing-out time. Oh no. If the kids at your school were on the same level as the kids at mine, they looked around until they made eye contact with you, then purposefully flounced away from your desk.

4. When You Were The One Person Who Spilled Candy

Spills happened. Teachers buy brooms for days like Valentine's Day. But as we advanced through middle school and grew more coordinated, candy-spilling incidents happened less and less each year.

But when they did happen, they happened to you. Nothing like the patterpatterpatter of candy hearts hitting grimy tile floor, or the walk of shame over to snag that classroom broom.

If you're a '90s kid, Mean Girls nailed a lot of your high school experience, but sometimes, grade school felt like high school, too. At some point, teachers decided we were old enough for candygrams, which for the most awkward or unliked of us, was just the icing on the heart-shaped cake. If not getting a Valentine or getting a misspelled Valentine was awkward, sitting in a classroom bereft of a single candygram while seemingly everyone else was handed roses or packages of Reese's Cups with notes on them was brutal.

6. When Teachers Tried To Make Us Like Each Other

Some teachers would catch on to all the sneaky Valentine's Day politics, which meant occasionally there were things like assigned gift partners, or Valentine's Day bonding activities. Fun when you're six or seven years old. Murder when you're 10 and above. Even for us awkwards, who suddenly found ourselves looped into gift exchanges and one-on-one chats with our crushes, it was torture. Just let us hate each other in peace.

7. When You Bought "Weird" Valentines

Generic valentines were of course the safest. Bland red-and-pink slips with Valentine's Day sayings like, "I heart you, Valentine!" and "Will you BEE mine?" One we got old enough to care what valentines said and not just what type of candy was taped to them, the valentine aisle became a minefield. Whether you were a girl who make the cardinal sin of bringing in Transformers or sports Valentines, or your valentines had sayings that were a little too cheesy-romantic, you ran the risk of some awkward interactions.

Ah, another benchmark of getting older. I went to a Catholic school, which meant every dance was patrolled by teachers who would stick their hands between us and loudly tell us to "Leave room for the Holy Spirit!" if they thought we were dancing too closely. Truly awkward AF.

Other school dance experiences are universal outside of Catholic schools, though, like asking someone to the dance and getting rejected, asking someone to the dance and getting stood up, slipping on your kitten heels, sweating through your dress shirt, having a parent chaperone... Or having your date tell you the next school day, probably in front of your friends, that sorry, they just aren't that into you.

This one's more of a retroactive cringe as we look back on the days of old, but now that our vision is 20/20, remembering the gifts you gave your crushes on Valentine's Day can be hella awkward-inducing. It's safe to say, though, that whatever kitschy nightmare you purchased for someone in seventh grade is probably long gone by now.

While Valentine's Day as an adult can put a lot of pressure on us, it's nothing compared to enduring Valentine's Day as kids. Take that comforting knowledge and go forward into heart day, knowing that though you still face challenges, you — probably — won't have to face grade school levels of romance awkwardness again.