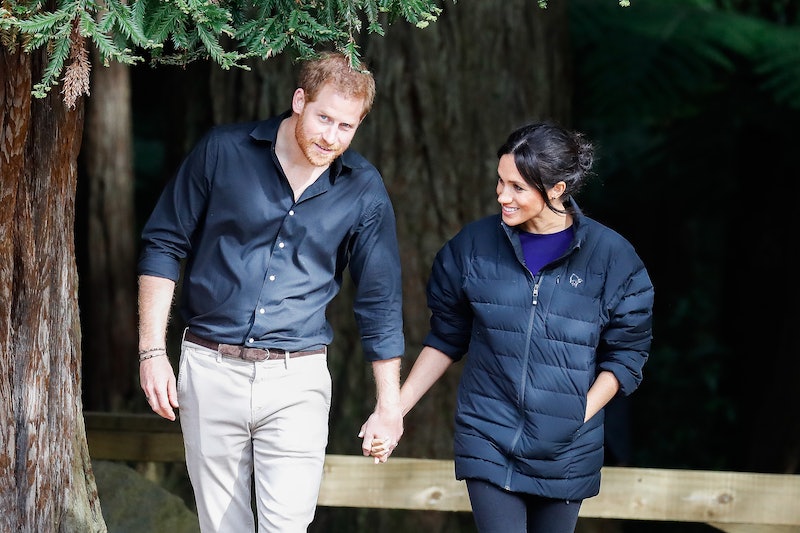 The baby is here! (You know which baby. The baby.) As confirmed by the Sussex Royal Instagram account, Meghan Markle and Prince Harry have welcomed a baby boy. And while they aren't sharing photos or giving a ton of details right away, there is one way fans of the couple can celebrate: looking for commemorative royal baby items online.

First, here's what we do know about the new baby: It's a boy, he weighed in at 7 lb. 3 oz., and he was born in the early morning of May 6. Also, in what might be the cutest video to ever exist, Harry spoke about the baby being born all casual like in front of two horses, and noted that the public will get to see a photo of the baby in two days. Thanks, Harry!

The video also shows how Markle and Harry are doing things differently — casual horse video instead of photos in front of the hospital — which leads us to the commemorative items. The Duke and Duchess of Sussex are not releasing official royal baby merchandise, as reported by the Independent. These items would have been sold on the Royal Collection Shop site and in the Buckingham Palace gift shop, but a spokesperson for the Royal Collection Trust recently told the publication, "We have no new ranges to announce." When Kate Middleton and Prince William's children were born, each had a selection of items released in the shop.

But, this doesn't mean there are no commemorative items for Harry and Markle's baby, just that there's no official ones. Take a look.

This T-shirt features a cartoon depiction of Harry and Markle with a baby carriage and the words, "Baby Sussex May 2019." This Etsy seller also has other Harry and Markle shirts, like this one showing them under an umbrella and this one of their wedding day.

This print is about the pregnancy announcement rather than the birth announcement, but it's still a way of looking back on this exciting time.

This hoodie is hilarious in that it really jumps the gun. You could totally wait until the royal baby is named and get one that says "Meghan & Harry & James" (or Albert or Charles or whatever the name is going to be), or you could get this generic one that is way funnier. By the way, Teepublic sells this same print on other items, too, like T-shirts and mugs.

Again, if you really can't wait, Teepublic has your back. This one is less blunt than the hoodie above, and has some cute Union Jack and American flag hearts.

This might be odd for a baby to wear, because it seems like the baby wearing it is the royal baby or at least half American and half British, but here it is, anyway.

This onesie offers a subtler take. There's no need to force your baby into being a royal watcher just yet, but they do probably like blankets. There's a "Duke of Blankies" version, too.

On eBay you can buy magazine issues related to the Duke and Duchess' baby, like this copy of Hello! from April about "Meghan and Harry's joy."

While they aren't releasing memorabilia in honor of their baby, there are still a few items left in the Royal Collection Shop related to Markle and Harry's wedding. In addition to this mug, there's a plate, a candle, a tube of biscuits, and more. They're not about the baby, but they are about love.