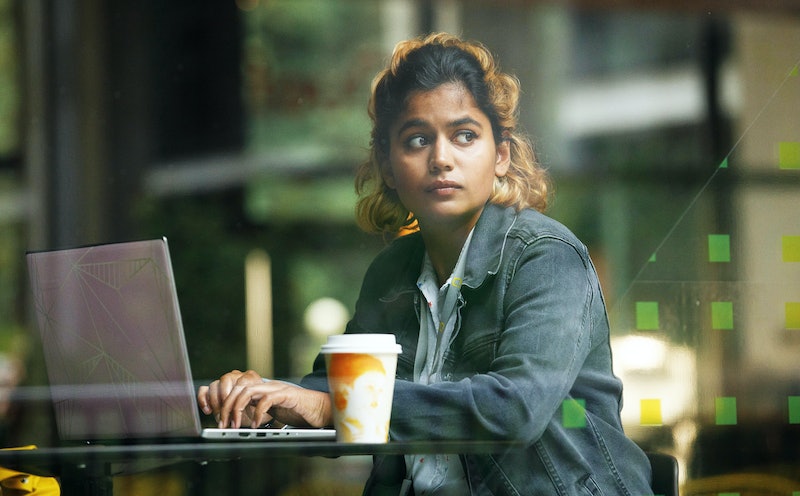 Two episodes into Devs, there are a lot of questions left to be answered. Like, what's the ultra-secretive project the Devs are working on? How did Forest's daughter die? Where did Lily get all of her impeccable apartment furniture? You know, all of the important stuff.

The guessing game is half the fun of watching the show, but even with such little to go off of, fans already have several Reddit theories about Devs and its unraveling mystery. Here are the best nine so far.

"I don't think they killed Sergei, I think they are going to harvest his brain and use it to add computational power to the machine," user mttl wrote in the show's subreddit. "I think that 'quantum computer' in the glass case is not really what we think it is. That's just to fool people into thinking Forest is using traditional quantum computers made out of metal tubes. Then Sergei saw the code and learned what they were actually doing there, making him sick knowing that he'd be running code on human brains. Then he runs out of there, they 'kill' him, and fake his death." It's outlandish, but hey, the evidence is there.

2. Devs Shares a Universe with Annihilation

Reddit user grapesmc posted a screenshot from Devs creator Alex Garland's 2018 movie Annihilation, which shows the characters walking past a sign that says "Fort Amaya." Could that come into play later on in the season?

3. Forest Wants to Alter The Past

This one seems pretty obvious, especially given all of the religious imagery on the series. Several fans have predicted that Forest wants to change the past (or reimagine the future) and, in doing so, bring back his daughter. Redditor fightswithbears also pointed out that the show's title, Devs, is one letter off from Deus, the Latin word for God. As in, Deus ex Machina, which harkens back to Garland's 2014 sci-fi movie.

4. Everything Is a Simulation

Reddit user botug theorized that maybe reality itself is a Devs simulation. "Little things stand out to me like the head of security saying he should quit smoking and Nick Offerman['s character Forest] tells him it doesn't matter," they wrote.

5. There Are Actually *Two* Realities

Redditor demar_desol had a similar theory, pointing out how surprised both Forest and Kenton (the security guard) were when they learned about Sergei's death. "I also noticed another hint at two realities when Forest talks to Lily about his daughters [sic] death, and says he split into two states," demar_desol continued. "One in which her death was impossible and one where it was true. When talking about the 2000 year projection [which depicted the crucifixion, Forest] says it's not a miracle and it has to be, despite our quantum computing, the problem is binary. it exists totally or it doesn't. total accuracy, zero variance. there has to be deviations."

This would certainly explain Sergei's multiverse speech in Episode 1, which Forest dismissed a little too quickly (and which prompted a suspicious smile from Katie).

6. Forest Is Trying to Save The World From Environmental Ruin

In addition to the fact that the two main Devs characters are named Forest and Lily, the show evokes plenty of natural imagery, according to TheMercyTron. "Possibly, running predictive models to counteract a planet's ruin due to overpopulation?" the Redditor wrote. "There are shots of congested city scapes and aside from the the lush, haloed 'forest' around Amaya, the trees are sparse."

TheMercyTron continued, saying that two meanings for the name Amaya are "'mother city" and "the end," and that it also could be a reference to "[T]he speculation that the end of Mayan civilization was in part due to the climate and burden on their environment."

OK, this one is pretty wild, so stick with it. TheMercyTron also speculates that, "Forest's desire to go off the rails of his 'tram line' to ease his feelings of loss appear to be his motivation. Katie actually somewhat resembles the young Amaya and makes me question if she's an advanced AI built by/for Forest for this purpose."

In other words, perhaps in building an AI like Katie, Forest is trying to simulate a world in which his daughter survived.

8. The Man Experiencing Homelessness Is Not Who He Seems

We don't know too much about Pete so far, but several fans theorized that he may be sleeping outside of Lily's apartment for a reason. These predictions include that he's a federal agent, a Russian spy, an admin in the Devs simulation, an Amaya mole, or even God.

9. Katie Is the Real Big Bad

"It seems to me that Katie is going to end up being the true fanatic/villain of the story," enderwjackson wrote. "Forest is seemingly controlled by his emotions while Katie seems much more controlled and calculated. And then we had the foreshadowing with all her black garb during the simulation of the crucifixion. She's the real mastermind here."

Knowing Alex Garland, however, Devs may turn out to be even more twisted than any of these theories put together.

More like this
6 'Happy Valley' Easter Eggs You May Have Missed
By Sophie McEvoy
Netflix Shut Down 'Bridgerton' S3 Rumours About A “Very Dark” Storyline
By Bustle
'The Last Of Us' Episode 4 Put Twitter Into An Emotional Spiral
By Alyssa Lapid
Bill & Frank’s 'The Last Of Us' Episode Has Twitter Emotionally Wrecked
By Alyssa Lapid
Get Even More From Bustle — Sign Up For The Newsletter
From hair trends to relationship advice, our daily newsletter has everything you need to sound like a person who’s on TikTok, even if you aren’t.