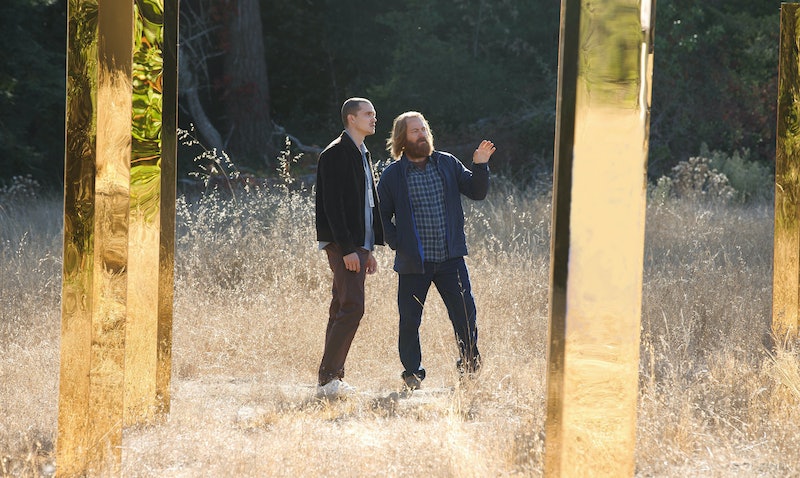 Spoilers ahead for Episodes 1 and 2 of Devs. For Lily (Sonoya Mizuno), the biggest mystery in Devs is what happened to her boyfriend Sergei (Karl Glusman), who mysteriously died after being promoted to a position in their quantum tech company's secretive Devs division. The biggest mystery for viewers, however, is what the Devs do in the first place.

The answers to both of these questions are inextricable. Sergei was killed after he tried to steal data about whatever project the Devs are working on; figuring out what that project is, then, is key to unlocking why he was murdered and what they were covering up.

As far as what we've seen on the show, we know more about what Devs isn't than what it is. When the Amaya CEO Forest (Nick Offerman) asks Sergei what he knows about Devs, he responds, "No one knows what the Devs team does except the Devs team." He proceeds to theorize that it's "not AI, not encryption, not search engine." It's also not national security, since Forest doesn't "give two f*cks" about that.

What we do know is that whatever they're doing, it's highly protected. The office is a low-set, cement house, much like the one in Ex Machina (no mistake, since Devs creator Alex Garland directed the 2014 film). Forest explains that it's built with a lead Faraday shield, followed by a concrete shell, gold mesh, and finally an eight-yard vacuum seal. Inside is a floating gold building that's suspended mid-air with electromagnetic shields.

This is where their machine is held. When asked how many Qbits it's running, Forest cryptically responds that it's "a number that seems pointless to express as a number." Even Forest's instructions to Sergei are frustratingly vague. He shows him to his station, explaining, "I'm not going to tell you [what to do]. I won't need to. Just sit, read code — take your time. And don't worry, you're going to figure it out."

Soon, Sergei becomes so overwhelmed with the contents of his screen that he escapes to the bathroom to vomit. We never learn what he saw, but when Segei asks Katie (Alison Pill) whether their code is real or theoretical, she responds, "It's not theoretical."

Katie, however, remains stone-faced. "No. If it's true, it changes absolutely nothing," she says. "In a way, that's the point."

This exchange is key. Though it doesn't make much sense within the context of the show, it starts to click into place when you consider something Garland said at New York Comic-Con. "[The idea for Devs] started with two things," he explained, per IndieWire. "One was getting my head around this principle of determinism, which basically says everything that happens in the world is based on cause and effect… That has all kinds of implications for us: It takes away free will. And if you had a computer powerful enough, you could predict the future and understand the past."

If you could predict the future, it would, in theory "change everything." But if we have no free will and everything is pre-determined, it would also change nothing. Pair that with the grainy footage we've seen of Jesus on the cross from centuries ago, and Garland may have already given the answer away.