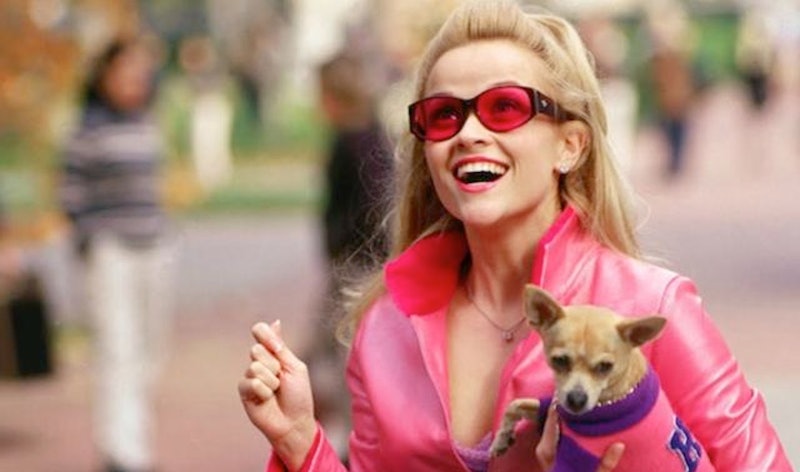 It's crazy to think that Legally Blonde, one of the most iconic romantic comedies of the 2000s, came out just over 16 years ago. (Insert "wanna feel old?" joke here.) A lot has changed over the past decade and a half, and yet the movie that made Reese Witherspoon a household name (and a Hollywood icon) really does truly hold up, at least mostly. As with any movie past its 10th birthday, there are plenty of quotes from Legally Blonde that are super outdated.

Classic comeback or not, there are some pretty iconic lines and moments from the movie that just don't quite stand the test of time, like out of date pop culture references or stereotypes that would be too controversial to include in movies in the age of Twitter. And let's not even get started on the technology. One thing that will never be outdated, however is the story of Elle Woods. Elle's transformation from a perky, fashion-obsessed blonde to a serious, feminist lawyer is classic, and will forever be an awesome tale of girl power appropriate for all your movie night and sleepover needs. These nine quotes from Legally Blonde that are super outdated won't change the value of the movie, no matter how old it gets.

So, Warner's historical diss, unleashed during their breakup, isn't outdated because of how long ago the Jackie vs. Marilyn drama was, but more because of how politics have shifted. In fact, in the era of Donald Trump, the quote is downright LOL worthy.

This exchange from the climax of Legally Blonde is particularly outdated because it plays into a gay stereotype that just wouldn't be used in a movie the same way today. Not all gay men are obsessed with fashion, and not all men who like fashion are gay. To have such a pivotal plot twist centered on a reductive stereotype is pretty shocking in 2017.

3. "There's nothing I love better than a dumb blonde with Daddy's plastic." — Boutique saleswoman

There are a few things in this quote that make it outdated. First, does anybody really subscribe to the "dumb blonde" stereotype anymore? Maybe it's because we live in the age of rainbow-colored and Instagram-worthy hair, but being blonde doesn't exactly scream dumb anymore, not that it ever really should've. Second, do people still call credit cards "plastic"? Pretty soon, credit cards are going to be obsolete (thanks, smart phones), and this slang term will have audiences scratching their heads.

4. "You know a Delta Nu would never sleep with a man who wears a thong." — Brooke

Another reductive throwaway line, saying that a sorority girl would "never sleep with a man who wears a thong" sounds oddly outdated considering the increased awareness of sexual fluidity and the deconstruction of gender norms.

Maybe it's just me, but the no white after Labor Day fashion rule didn't even make sense in 2001. I can't imagine it having much relevance in the future.

One truth about the universe is that we seem to be existing in a perpetual cycle of bangs going in and out of style. And, while you might think this fact makes this particular joke permanently relevant, it also means that the joke is only really funny when people actually care about bangs. In other words, at a time when bangs don't inspire passionate feelings on either side, the joke just falls flat.

7. "And last week I saw Cameron Diaz at Fred Segal, and I talked her out of buying this truly heinous angora sweater. Whoever said orange was the new pink was seriously disturbed." — Elle

No, I am not suggesting that orange is the new pink (this will never happen). However, the reference to Cameron Diaz shopping at Fred Segal is, well, very early 2000s. At the time, Diaz was the at the height of her career, starring in huge blockbusters like Charlie's Angels. And, while Diaz will always be a movie star, it's just not as impressive to hear about bumping into her in L.A. anymore. Not to mention the fact that Fred Segal is slightly less of a big name than it was in the '90s and '00s.

Calling Cosmopolitan the Bible isn't necessarily outdated right now, though in a world where print journalism is suffering more and more, it certainly could be soon.

9. "Oh, sweetheart, you don't need law school. Law school is for people who are boring and ugly and serious. And you, button, are none of those things." — Elle's dad

This quote from Elle's dad is, unfortunately, probably not outdated enough. There are always going to be men who think that women aren't smart enough to be lawyers, or that women can't be more than one thing. But, as long as we continue to fight for equal rights for all women, hopefully this way of thinking will continue to become history and drift into irrelevance.

Legally Blonde, outdated quotes and all, is still just as necessary a movie as it was 16 years ago if for no other reason that to make sure patriarchal ideas like the ones in that last quote form Elle's dad don't survive into the next century.