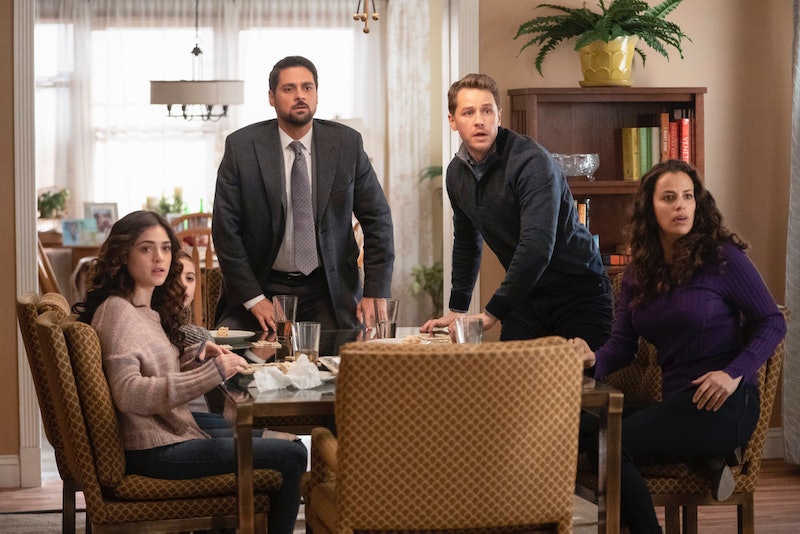 Manifest is a show about time travel that just recently doubled down on time travel possibilities in the most recent episodes. Captain Daly trying to re-create the storm and saying, "See you in 2024," suggests that he'll time travel again, and then Zeke, who wasn't related at all to the plane. also time traveled a year after being trapped in a cave during a blizzard. Much of this show makes no real life sense, which is why the best Manifest theories are also the ones most likely to make your head spin.

But time travel does open the show up to a lot of possibilities. The Major could be a future version of a passenger, characters we thought died may not actually be dead, and the plane may have saved the lives of everyone on board when it jumped the time/space continuum. Other theories suggest that seemingly believable characters may actually be super shady (looking at you Danny and Zeke), and that you can never 100 percent trust what you think you know.

And if you think you maybe sorta kinda know what's happening on Manifest, these theories will shake all that up for you.

1. This Is All The Bermuda Triangle's Fault

Logan Snyder posited on Geeks that aliens took the plane and kept the passengers in some sort of hypersleep, which is why they didn't age. Perhaps the shared consciousness is a result of alien experimentation.

Raise your hand if you believe Daly's stolen plane was shot down by the government. No one? Good. One theory is that Daly was able to again jump time by flying into the storm the second time. We'll likely see them again — maybe in another five years. After all, the creator has a six-year plan for the show according to Collider. Five years for Daly to be gone, and one year to resolve the aftermath. Makes sense.

The TV rule is — if you didn't see them die, they might not be dead. NSA director Vance was just starting to get intrigued with Ben's theories about Flight 828 and the government's involvement. Perhaps he faked his own death in order to throw suspicion off himself and investigate in peace?

5. Zeke Is A Plant For The Major

Zeke may be acting like he time-traveled for a year, but Reddit user luvprue speculated that the Major could be using Zeke to get on the inside circle of the Flight 828 passengers.

One Twitter user theorized that the Major could be Danny's wife who he said died. He met Grace in grief counseling and quickly attached himself to her family. Since then, he's refused to back off even when Ben came back. There has to be something more to his story, and one Reddit user suggested the shadowy man Cal drew in his family portrait is the shady existence of Danny. Another pointed out that Danny had to thad to have tipped the Feds off that Grace and Ben switched cars. Don't trust the supposedly unconnected nice guy, that's all I'm saying.

7. The Major Is Michaela Or Fiona In The Future

Reddit user caltordith pointed out that both Michaela and the Major are wearing similar necklaces. And since, as KellyKeybored noted, the show is being narrated by Michaela — but in past tense — it seems like there is a future version of herself involved in all this.

But there are also theories on Twitter that the Major is Fiona post-time travel with Daly. Shared consciousness was her idea, after all, and the meteorologist who knew about the storm was found dead after Ben spilled the details to Fiona. Shady shady.

8. Everyone On The Plane Was Going To Die

But traveling in time saved them. KellyKeybored also theorized on Reddit that the government could have experimented by putting people on the plane who had already died, and seeing if time travel past their dates of death could have saved their lives. It worked for Cal, and it could have worked for other people whose death dates were in the next five years. Talk about a Holy Grail.

Maybejustmolecules wrote on Reddit that Michaela could be pregnant with Jared's baby from before she got on the plane. Creator Jeff Rake told The Hollywood Reporter that the first season takes place over the course of six weeks, which would mean Michaela wouldn't necessarily know yet that she was pregnant. The Reddit user theorized that the Holy Grail isn't Cal, but Michaela's baby who would have only been forming at the time of the time travel — making the child very special.

Each new episode of Manifest drops a new bombshell that brings with it even more questions — so the theories are only going to get wilder. Fans are just along for whatever ride Rake is taking us on.