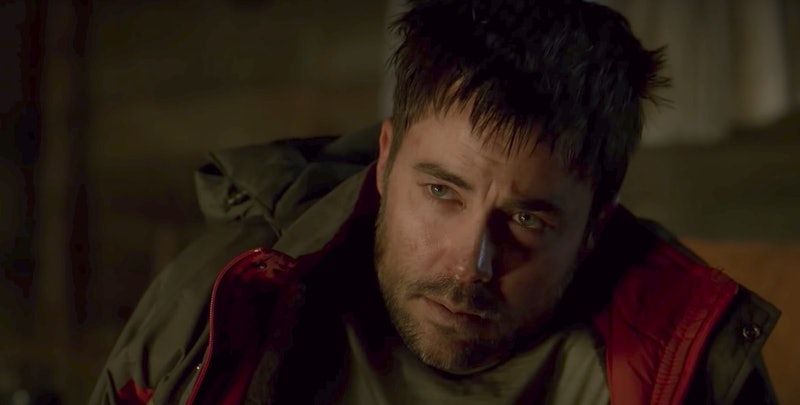 Manifest dropped what may be one of its biggest bombs yet at the end of the Jan. 21 episode. There are more time travelers besides the plane passengers and Zeke's Manifest story is undoing everything you thought you already knew about this show. It turns out that Zeke was the mysterious person caught in a blizzard that Michaela had been having visions about for a while now. It was Cal who finally found him in a remote cabin in the woods. And after Ben and Michaela showed up and helped Zeke warm up, literally, he started talking. It was then that he revealed he's coming from December 2017.

In the show's timeline, it's late 2018 — which means Zeke time-traveled through a year of his life. Until this point, the only people who had done that were the passengers on Flight 828 who skipped five years. That was assumed to be some kind of unexplainable fluke, but now that Zeke exists, it could mean more time travelers are out there.

Much like the 828 flight, the last thing Zeke remembers is a freak storm. In his mind, only two weeks had passed. But in the real world, it had been a year. And in the promo for the Jan. 28 episode, Zeke describes the blizzard as a storm that "came out of nowhere," which is exactly what the plane captain said about the storm that he believed transported them through time.

If it can happen twice (three times if you suspect that the captain and Fiona's most recent flight didn't really get shot down), it may have happened even more times and there could be a whole league of time travelers out there. Zeke was drawn to Michaela, determined to "find her" after her picture in a magazine gave him hope to survive his wintery doom. And Michaela began having callings about him as well, so perhaps she'll end up being connected to the possible other time travelers as the show goes on.

The other interesting thing about Zeke's mysterious time jump is that it opens up the possibilities for how long someone can be gone. On the flight it was five years, but for Zeke is was only one. Was his storm weaker? Is it because he was on the ground vs. in the air and right in the storm? Could the pilot and Fiona's plane come back sooner than five years? Could someone time jump even further than five years?

Zeke almost didn't survive his storm, and nearly froze to death in the cave he was trapped in. Perhaps the Flight 828 passengers were also doomed to die in that storm if not for the captain's brave flying. Maybe storms like these have successfully plucked the strongest from the crowd, while maybe other people haven't been so lucky. Now that they're survivors, perhaps that's why they're all linked and all drawn to do good for others.

And as many questions as Zeke's arrival has opened up on this show, one thing seems glaringly clear — he's going to be a love interest for Michaela. She's been upset about Jared for the entirety of the series thus far, and it may be time for her to move on. Zeke looks just enough like Jared to be her type, but he can also understand what she's going through in ways Jared tried, but just couldn't.

Plus, Zeke already has a huge thing for Michaela. She basically saved his life and was his reason for going on. Deadline reported that Zeke was set to be "a mysterious new character whose arrival triggers a new relationship triangle," so the Jared/Michaela drama isn't over yet. But it certainly explains why Michaela felt that she needed to go to the cabin alone — and without Jared — she was going to meet and maybe fall for Zeke.

The whole premise of the show shifted with Zeke's introduction, so here's hoping he can provide more answers as the episodes unfold. We have enough unanswered questions as it is.