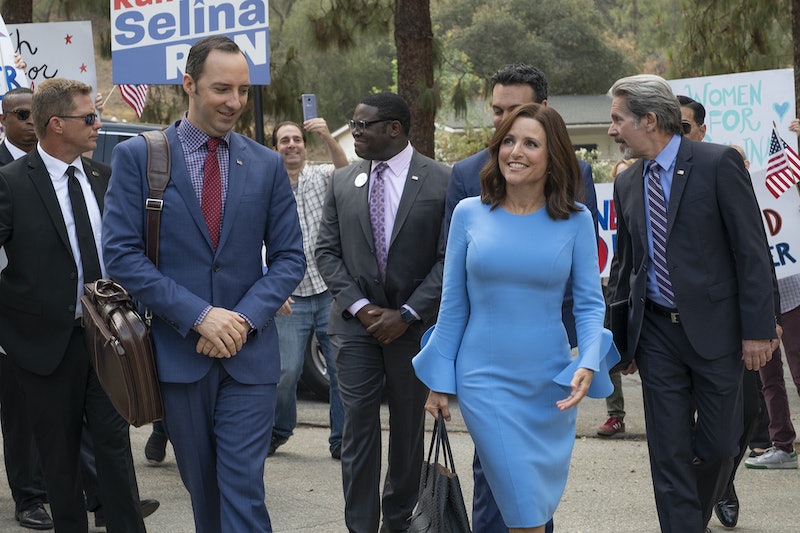 The time has finally come —Veep is back for its seventh and final season, and its razor-sharp tone is just as cutting as ever. The newest episode immediately comes out swinging with moments that will remind that Selina Meyer and her staff are just freaking awful, just in case you've forgotten in the long months between seasons. Some particularly cringe-worthy lines from the Veep Season 7 premiere will have you holding your head in your hands, groaning, somehow still astonished that these notoriously profane political insiders actually went there.

Of course, that style is Veep's bread and butter. The show knows it's comprised of characters who are inappropriate, narcissistic, selfish, and generally just not very good people, and it embraces them. Selina Meyer embodies all of these things, perhaps more than anyone else onscreen, and yet people can't get enough of her. Julia Louis-Dreyfus has skillfully portrayed the Vice President-turned-President-turned-potential presidential nominee throughout her ups and downs, all while reminding people time and time again why they love to watch her terrible behavior unfold.

The circle that Selina has cultivated around her these past six years is at its strongest when Season 7 begins, and there are a few standout moments that quickly drive home just how far the show will go to prove how hilariously irredeemable they all are.

Dan Has Less Than Gentle Words About Amy's Abortion Plans

Dan and Amy are still dealing with the situation of their unplanned pregnancy, and when he learns that she hasn't had an abortion yet, he's quick to lob some tasteless insults. "I thought you said the thing hit the 7/11 dumpster in the sky already," he says. "Are you waiting to for it to get in f*cking college? What are you doing?" Just awful.

Selina's made a habit of touting her daughter's baby in front of journalists to achieve a grandmotherly look, but doesn't love that she's being told she can't say "no" to the child. "What are you supposed to say then when the baby is being an asshole, for instance?"

Amy Has Big Plans For Her Future Administration

As Selina scrambles to write a speech about why she wants to be President, she asks Amy what she'd say to that question. "So I could nuke America," Amy shoots back, matter-of-factly.

Jonah manages to let it slip that he's married to his step-sister — a fact he neglected to tell his campaign team when he began to run for President. The entire thing is made so much worse by his comments after the revelation. "I don't know what the big deal is. It's not like Beth and I ever did anything unless you count her walking in while I was whacking off all the time." Oof.

This was definitely an accident, but Selina feeds a town's beloved dog some chocolates Gary covertly gives her when she says she's hungry. Later, news breaks that a town is heartbroken over a "dog mayor in a coma."

Yeah, this one is really rough. After offering thoughts and prayers to the victims of a school shooting, Jonah tells the press a "hard truth" while on the campaign trail. "Sometimes, hot-shot lacrosse players who think they own the cafeteria can bring this on themselves." Jonah's going to win the election, isn't he?

Jonah Clarifies His Relationship With His Wife

As he clarifies that he and his wife are not related by blood, Jonah says, "when I bone her, she doesn't give birth to a pile of legs." Yikes.

Selina's Passion For The People Really Shines Through

After trying and failing to rewrite a meaningful speech yet again, Selina instructs Gary to phone it in. "Just put down something about how I want to give the American people a better deal, or some f*cking crap like that."

Dan Tells Amy He's Not Ready To Be A Father

Amy's toying with the idea now of actually having her and Dan's baby, and he finds the most Dan Egan way telling her he's not ready. "I just don't know if I'm ready to be a daddy to anyone who's not a sexy boho jewelry maker struggling to pay off her college loans," he says. "But if you want to like, go Dutch on the abortion, just hit me up on Venmo. Make it public, it shows I'm a gentleman."

This all happened in just the first 28 minutes of the season. Something tells me we're far from done hearing outrageous insults and vulgar comments, but honestly, it wouldn't be Veep if it weren't a little uncomfortable.

More like this
'Elite' Season 6 Is Arriving Sooner Than You Think
By Gretchen Smail and Grace Wehniainen
'The White Lotus' Season 2 Trailer Teases Multiple Affairs & Another Dead Body
By Bustle Editors
'Ramy' Will “Probably” End With Season 4, According To Ramy Youssef
By Brad Witter
If 'Entergalactic' Season 2 Happens, You Could Get A New Kid Cudi Album
By Kadin Burnett
Get Even More From Bustle — Sign Up For The Newsletter