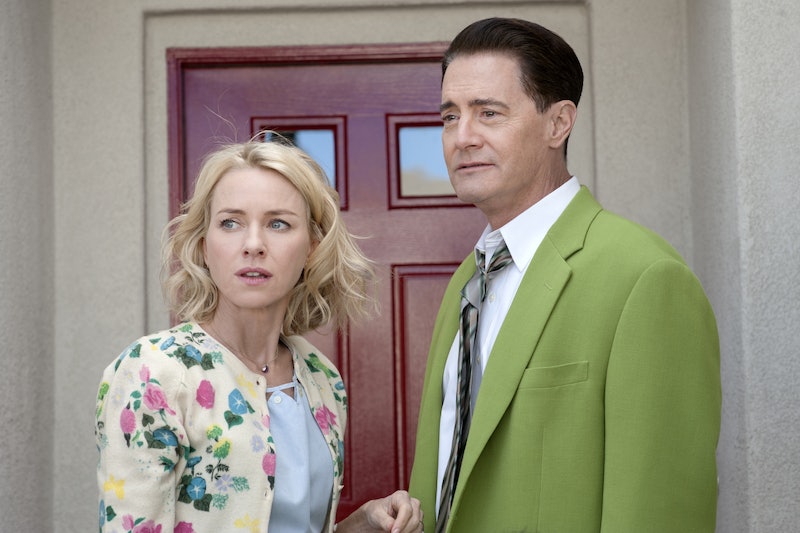 We're barely two months into Twin Peaks: The Return and this show has been nothing if not frustratingly mysterious as all get out. Given the nature of the show's abstract nature, which bobs and weaves around making a direct observation frequently, many fans have been left to come up theories about the Twin Peaks: The Return characters as well as the plots that they're involved with. Sure, it's great to see familiar faces like Hawk, Shelly, Lucy, and Ben Horne, but what exactly are they doing in this show? What are they involved with? Moreover, what are the bevy of new characters being introduced in this show involved in? It's all just a huge knot to untangle at this point.

Luckily, there are viewers who are just as intrigued as I am to pick apart the imagery, actions, and symbolism of Twin Peaks: The Return and try to make sense of it all through their various theories. While some theories have been disproved at this point (like one theory which argued Diane wasn't real, but we now know that she is), there are still some theories that demand closer examination. Most of these theories involve peripheral characters, but even so, the present the possibility of relating back to main characters and main events in the series; with Twin Peaks creator David Lynch, it's all connected somehow.

Here are those intriguing theories:

1. Richard Horne Is The Son Of Audrey & Bad Cooper

We're not sure yet exactly how Richard figures into things or how he's related to Ben, Jerry, and Audrey Horne but we do know that he is an awful, murderous piece of work. Given Richard's absolutely evil nature and the fact that he's about the right age, some have theorized he could be the child of Audrey and Evil Cooper. We know that Evil Cooper visited Audrey in the hospital after he emerged from The Black Lodge; it's entirely possibly Evil Cooper could have sexually assaulted Audrey while she was in a coma, as horrific a thought as that may be.

2. Audrey Horne Is The Anonymous Billionaire In NYC

Another, less gruesome, theory about the still-to-appear Audrey Horne is that she is actually the one who is behind the mystery box experiments in New York City. Given the box's connection to The Black Lodge, The Hollywood Reporter argued, it would imply that someone with knowledge of the Lodge's existence would set this box up. Furthermore, this theory relies on the idea that Audrey either worked her way up the corporate ladder or maybe married rich and lit outta Twin Peaks as soon as she could, which is how she earned her fortunes.

3. David Lynch Is Setting Up A Battle Between Good & Evil

Over at Digital Spy, it's believed that David Lynch is actually setting up an epic battle between the Good and Evil Coopers. Their theory goes a little something like this: "Dale Cooper's genuine soul has been trapped in the Black Lodge for 25 long years. Something has precipitated its release. Given its prediction by Laura Palmer way back when, perhaps it really is nothing more than the end of a sentence that has been spent. A purification process, perhaps. [...] Cooper is stumbling his way back. But he needs psychic assistance to overthrow Evil Coop and truly return. Evil Coop will not give up his place without a fight. He has killed Major Briggs, double-crossed Phillip Jeffries and will attempt anything to keep the Good Dale at bay. It seems tangential at the moment, but Hawk's own mission feels bound up in Cooper's return and ultimate redemption." Very interesting, indeed.

4. The Hum At The Great Northern Lodge Is Important

In Part 7, a humming was heard by Ben Horner's secretary, Beverly, and Ben himself. The two attempted to deduce where the sound was coming from, but had the damnedest time trying to locate it. One site theorizes the sound might be coming from one of spying rooms created by Audrey or that it could be the spirit of Josie, who was trapped in the wood at The Great Northern after she died. Is the humming indicative of something important?

5. What If Dale Cooper Isn't Actually The Good Cooper?

A dark theory to be sure, but Reddit user chblank theorized that Wally is an actor hired by Sheriff Truman to help Andy and Lucy cope with the loss of the real Wally. This Reddit user goes on to theorize that Lucy has been especially unable to move on and is stuck in the past (backed up by her inability to comprehend how cell phones work) and that Wally's appearance in Part 4 was him no only showing up to say hi to his parents, but also to encourage them to move on by converting his room into a study. Trippy.

The floating head of Major Briggs that we see in Part 2 as Cooper wanders through another dimension was mentioned on Reddit by user billy_yllib11 as the head that belongs to the headless body found in the apartment in South Dakota. The Reddit user doesn't provide much evidence beyond this, however, it's the most compelling lead, don't you think? While Major Briggs was in his 40s, roughly, back in the early '90s and the headless corpse in South Dakota is thought to be in his '40s in 2017, some Lynchian explanation could take care of that plot hole. If it is the body of Major Briggs, what does it mean? How did he get there?

8. Tracy Is More Important Than You Think

Youtube user Old Tin Man ponders what Tracy's motives actually are in the first two episodes of Twin Peaks: The Return. He aptly notes that Tracy could just as easily arrange a coffee date somewhere else if she really wanted to hang out with Sam. However, she is incredibly persistent to get into the room and see what Sam is doing. Old Tin Man believes that Tracy works for a rival company that is attempting to uncover the technology or secrets of the box and that this could tie in with another character or plot.

9. The Drug Addict Mom In Rancho Rosa Is Important

The mother and son in the housing development of Rancho Rosa are curious. It's easy to feel bad for the boy, who is clearly neglected by his mother, but what about the mother's drug-induced ramblings? We keep returning to her time and time again, so there must be some importance to her character, surely. Reddit users theorize that she is connected to The Black Lodge because the numbers she shouts — "1-1-9!" — seem to just be 911, backwards. Other users say that's too easy an answer, but they still believe she has a grander purpose in this show. Others believe she is simply part of the social commentary of the show, an example of the awful things that happen in suburbia (a theme Lynch is often preoccupied with in his work); What gives?

We're already a month and a half into Twin Peaks: The Return and if these are the theories that are popping up thus far, I'll be curious to see if they actually come to fruition and curious to see what new theories pop up in their place.

More like this
Michael & Kathleen Peterson’s House From ‘The Staircase’ Has New Owners
By Kadin Burnett and Kayla Blanton
'The Wilds' Has A Major Cliffhanger To Resolve In A Potential Season 3
By Brad Witter
Will ‘Moon Knight’ Return For Season 2? There Have Been Promising Signs
By Kadin Burnett
These 'This Is Us' Finale Theories Will Make You Weep
By Brad Witter
Get Even More From Bustle — Sign Up For The Newsletter