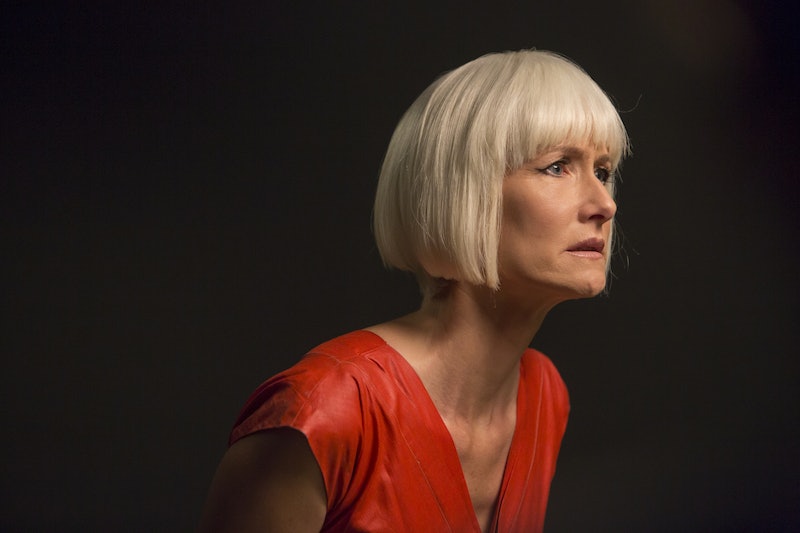 If you were worried that Diane wasn't going to have a reprisal on Twin Peaks: The Return, fear not: she has returned in all her platinum-bobbed ferocity in order to help Special Agents Gordon and Albert figure out who the heck is locked up in a South Dakota prison — because it sure ain't Cooper. Diane's past with Dale Cooper on Twin Peaks was brought up as she interrogated the bad Cooper, which only left me with more questions, namely: What the heck happened between Diane and Cooper 25 years ago?

But before we ponder the possibly intense love affair that Diane shared with Cooper, we should focus on how she got reeled into interrogating the bad Cooper in Part 7. After Albert's fruitless reunion with Diane in her local bar, he and Gordon return to her apartment to convince her to help in their investigation. They tell her that if anyone would know whether the currently incarcerated Cooper in South Dakota was the one they worked with back in the '90s, Diane would be the exact person who would know. So, she begrudgingly accepts.

As soon as the private plane carrying Gordon, Albert, Tammy, and Diane lands, Diane begins making demands about how to conduct the interrogation. Simply grateful that she's even there to help, Gordon acquiesces with her every demand on the terms. She tells Gordon that she wants to control the pace of the interview and that she'll only want 10 minutes. She feels like she'll know within the space of those 10 minutes whether or not the Cooper she is speaking to is the Cooper she once knew.

Once inside the interrogation room, Diane looks visibly shaken despite trying to steady herself. As the partition raises and Cooper is revealed to her, she looks at him dead in the eyes. He greets her with a chilling line: "I knew it was going to be you. It’s good to see you, Diane." Yikes, that's a bit unnerving, right? Diane asks if Cooper can recall when they saw each other last. Cooper, evading the question, asks her if she's upset. She spits back at him, "What do you think?" and then repeats her question. Cooper, his voice, says they were together at her place and it was a night he'd never forget. Wait, what happened between Diane and Cooper? This topic better come back up in conversation at a later date.

Clearly on edge, as if looking at this version of Cooper was like a knife in her gut, Diane asks who he is because this is clearly not the Cooper she knows. Cooper is puzzled and Diane demands that he look her in the eyes. They hold eye contact before she rushes out of the room.

Once outside at the car, Diane pulls Gordon away from Albert and Tammy. She's distraught. She tells Gordon that whoever that man is, it's certainly not Cooper because of something inside of his heart, which she implies is something dark and sinister. She knows that he's different. Gordon comforts her as she collapses into his arms and in that moment both of them appear to know that they have their work cut out for them if they're going to locate the real Cooper.

The plot thickens, the search continues, and all that jazz, but when will Gordon or Albert have the bright idea to return to Twin Peaks? It seems logical, right? It's definitely nice to see more of Diane and even get to experience her firebrand personality as she takes on the bad Cooper (seriously, she's amazing to watch), but it's time these FBI agents start working like, well, FBI agents. Enough with the interrogations; it's time to hit the road, guys. Twin Peaks is calling.