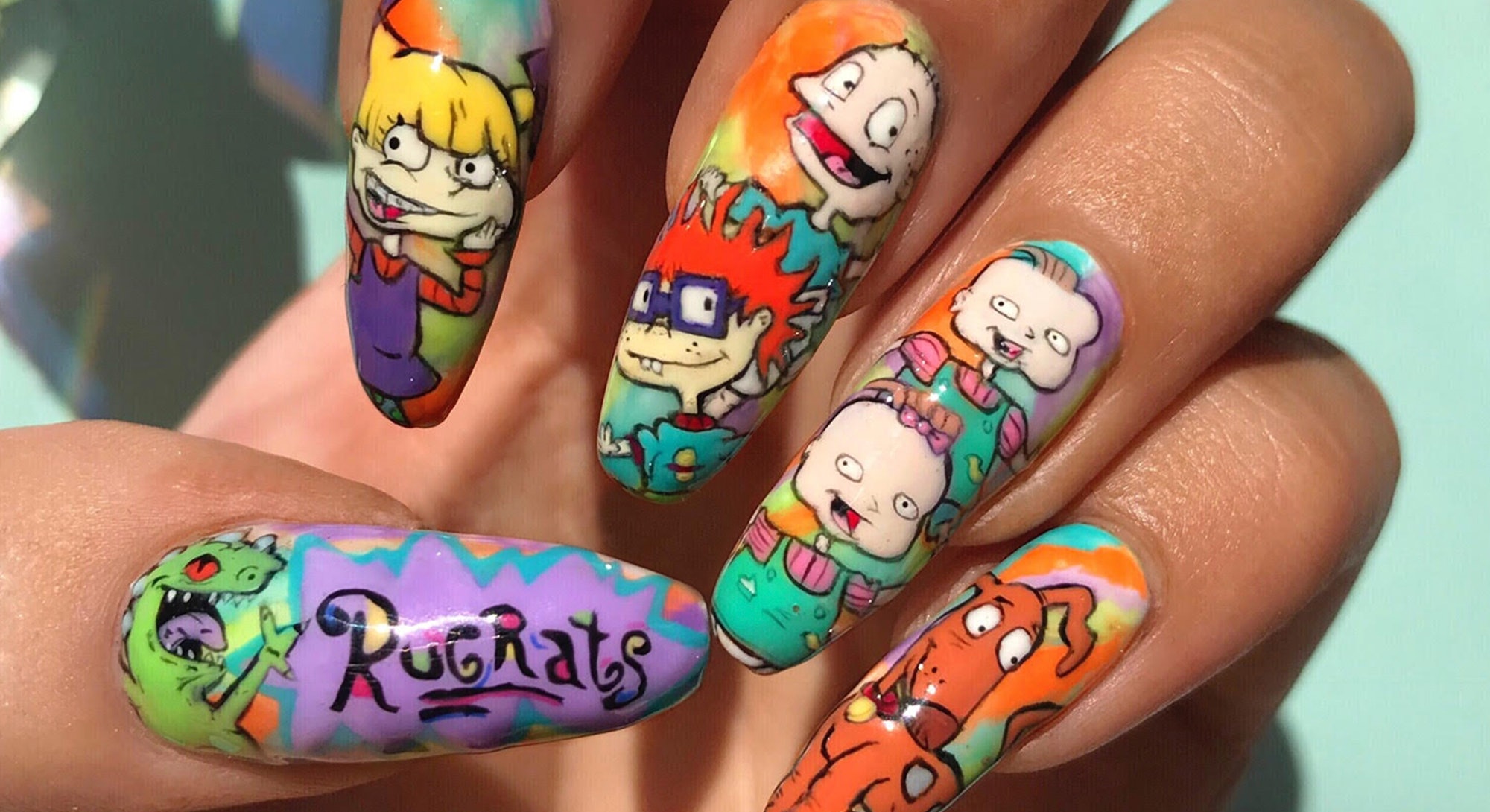 Since nail art first exploded into the mainstream in the early 2010s, it has continued to persist as what appears to be a never-dying beauty trend, though it has gone through plenty of iterations. Around 2014, nail artists at Fashion Week started moving toward subtler, easy-to-DIY manicures, but that didn't mean nail art was over — far from it, in fact. Around this same time, salons that specialized in this chic nail art, like Paintbox in NYC and Olive & June in LA, started popping up with great success. Now in 2018, the sub-Reddit /r/RedditLaqueristas, a place for users to share swatches of new polish and show off their latest nail art creations, boasts over 104,000 subscribers.

For Bustle's July 2018 digital issue, we're exploring fandoms of all sorts — from stand-up comedy to Harry Potter, comic books to video games. The nail art community is certainly a fandom in and of itself, but plenty of talented artists use their manicures to express their affection for their other hobbies and interests. Below, you'll find a sampling of nail art designs that draw inspiration from some of the most dedicated fandoms out there. Consider it inspo for your next manicure appointment.

Another beloved thing from our childhood that's currently having a strong moment? Animated princesses, especially from the Disney universe. Florida-based nail artist and self-proclaimed '90s baby Devin Strebler (@nailz_by_dev) was inspired by the iconic balcony scene in Aladdin for this mani.

According to a recent Google study, horror is the only film genre that gives women more screen time than men. So, it makes sense that ever since Mary Shelley wrote Frankenstein (and perhaps even earlier than that), women have made up a massive part of the horror fandom. U.K.-based nail artist Colette Barton (@nailsbycolette) says this Scream-inspired manicure she originally created in 2014 gets recirculated on Tumblr every year around Halloween.

With the Marvel and DC universes completely taking over movies and television, it's clear that love for these comic book worlds is only growing. Black Panther, the most recent hero to join the modern day comic-film library, was the inspiration behind this manicure by Christi VanZandt (@polishedinportland).

As Vice and other outlets have recently reported (though we never needed that for official confirmation): Tabletop games are cool again. Even as virtual reality and AI improves, people are still seeking the feeling of camaraderie that comes with playing games IRL. And while there are plenty of new board and card games to get excited about, nothing beats a classic like UNO, which inspired this mani by San Francisco-based nail tech, G (@itsagcreation).

Of course, there are times when a virtual reality can be more appealing than the real world — even if the video game involves a post-apocalyptic landscape. The creepily cheery Vault Boy from Fallout makes for a pretty cool manicure, as proven by Chrystee aka @kidfiasco_xo.

The so-called golden age of television only seems to be going stronger every year. While there are plenty of shows that could make for great nail art, this Bob's Burgers-inspired manicure by Portland-based nail artist Katrina (@katrinamarieee) is extremely rad.

In the world of what we'll call "prestige animation," director Hayao Miyazaki's Studio Ghibli creations are possibly the most well-known to the general public — and My Neighbor Totoro is one of his classics. Eva Klinman, who runs the nail art blog Flight Of Whimsy, created a manicure that features some of the major spirits from the film.

While there's been much debate about whether Star Wars is sci-fi or fantasy (or both?), it does have one of the most dedicated fan bases of any franchise. For Star Wars Day (May 4), Colette (@nailsbycolette) created this fantastic mani featuring some of the films' most famous characters.