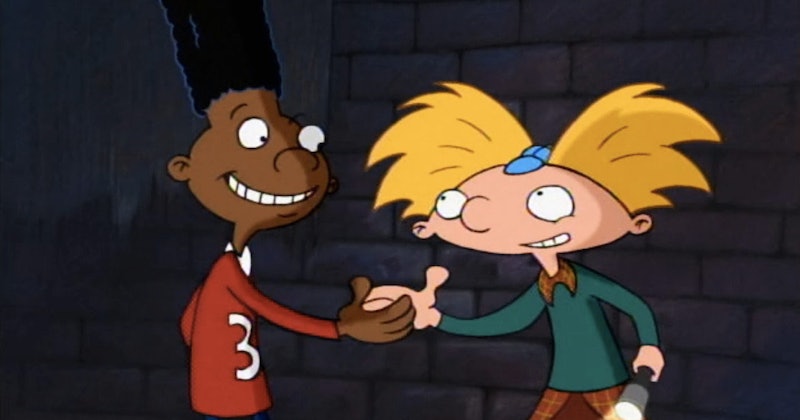 I am the first to admit modern TV is undeniably fabulous. Sometimes, I wonder how I made it so long without the likes of Game of Thrones, Crazy Ex-Girlfriend, and Stranger Things in my life. It's equally true that '90s kids grew up with amazing TV, too. The shows of my youth may not have earned the label "prestige TV" like the shows of today do, but they were some of the wisest and most enduring series ever created — and they made growing up so much more fun.

From the beautiful community Arnold inhabited in Hey Arnold! to the fearlessly feminist storytelling of Buffy the Vampire Slayer, '90s kids are lucky they had such a wide range of shows committed to being entertaining and invaluable sources of learning about the world beyond the TV set. Most of the awesome shows '90s kids were raised on are available to stream online, but there was something special about plopping down on your couch with a bowl of cereal on a Saturday morning to catch a new episode of Doug. Watching the shows on this list was a formative experience for a generation of young people.

There is more TV to watch than ever before these days, but there's no denying the '90s truly were a decade of classic TV. If you grew up in the era, you can count yourself as one of the fortunate few who saw these incredible shows as they aired.

From the comfort of their living rooms, '90s kids were treated to a smart, deeply human look at what it was like to live and grow up in a multicultural community. It just happened to be animated.

Buffy's feminism, clever dialogue, and high school on a hellmouth metaphor for surviving your teen years inspired viewers to believe that like Buffy, they could make their corner of the world a better place too.

3. Clarissa Explains It All

Clarissa Darling doled out life lessons about dealing with pesky younger siblings, first dates, and figuring out how to own your identity. I honestly don't know how kids today get by without her.

Cory, Shawn, and Topanga guided a generation from middle school through college. In the process, they taught viewers the world is a complicated place, but it's easier to navigate when you have friends — and Mr. Feeny — by your side.

Thanks to Wishbone, classic literature was just another entertaining part of the average '90s kid's life. It's amazing a talking dog inspired a life-long love of reading for so many people.

For anyone who grew up in a blended family, Moesha was essential viewing. Watching her learn to accept her step-mother gave so many the tools to deal with their own familial struggles.

This hilarious animated series put playground dynamics on display in a way that made every kid realize the struggle to find your place in the hierarchy of elementary school was a universal experience.

8. The Adventures Of Pete & Pete

Brazenly weird and subversive, the story of Big Pete and Little Pete was unlike anything else on TV now or then.

Watching The X-Files was a rite of passage. For many '90s kids, it was the first "adult" show they were allowed to watch. Given its penchant for philosophy, gore, and satire, it served as a fascinating introduction to the secret world of adulthood.

Your first introduction to sketch comedy is something you never forget. Also, All That gave the world the gift of Kenan and Kel.

Miss Frizzle instilled a love of science into kids, and turned rainy school days into an excuse to watch the rare educational show that was also entertaining.

13. Are You Afraid Of The Dark? & Goosebumps

Yes, I'm cheating by lumping them together, but these two anthology horror series offered up the scares you craved, and prepared you for your future love affair with American Horror Story.

Grounded by the awkwardness of first crushes and puberty, Doug may very well have been TV's most relatable character.

15. The Fresh Prince Of Bel-Air

Not only did it have the greatest theme song of all time, The Fresh Prince allowed '90s kids to grow up alongside a young Will Smith.

The madcap humor, the introduction of Pinky and the Brain into your life, and a never-ending parade of pop culture references — what would you be watching now if you had never been introduced to the joys of absurdist comedy?

17. Legends Of The Hidden Temple

A game show that made its viewers want to get off their butts and learn about history is a rarity indeed.

Full House may have served up its share of cheese, but the Tanner family always made you feel like you had a safe, happy place to turn to when your young life got too confusing.

It's never too early to start learning about feminism, and Bubbles, Buttercup, and Blossom were some of your earliest teachers.

A reality show well worth your time, Bug Juice chronicled the lives of real campers and made the prospect of leaving home for the first time exciting instead of scary.

The PBS show melded mystery, the supernatural, and the power of the written word to produce a series that was addictive and unlike anything most '90s kids had ever encountered before.

Even if you didn't entirely understand it, Rocko's Modern Life was covertly preparing you for the strange realities of adulting.

Like a cross between a wacky wizard and a mad scientist, Bill made you forget you were learning while he taught us the building blocks to science.

Sorry, literally everyone else on the planet, but '90s kids were treated to the ultimate Batman story.

Parent-approved and way ahead of its time when it came to gender politics, Xena's weekly adventures were campy, but valuable lessons in the power of female friendships.

Thanks, '90s TV. This generation would be lost without you.