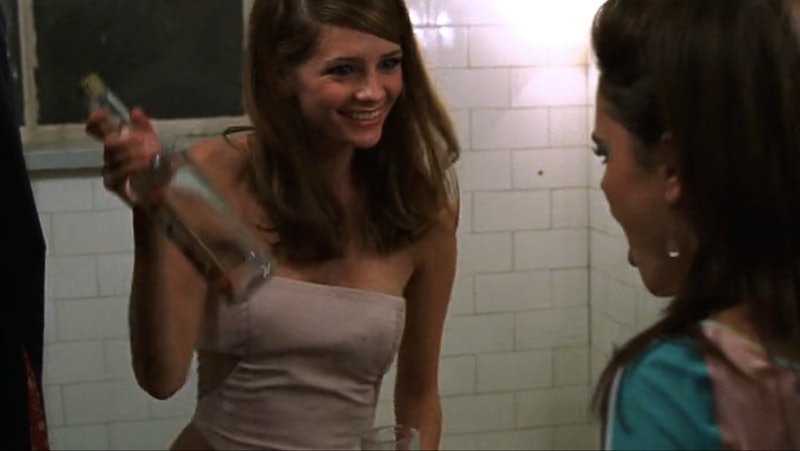 Something that all O.C. fans know is that a lot happens in the first season. It's wonderful on its own, but then you get to Season 3 and think, Man, maybe they should've slowed things down a bit so we weren't watching Johnny and Volchok now. And just like with the first season overall, there's a lot going on in the O.C. pilot alone, much of which foreshadows what's to come.

We get so much information in the first episode. We find out about Ryan's mom and brother, Jimmy and Kirsten's past, Marissa's alcohol issue, Sandy and Kirsten's relationship history, Seth's longtime crush on Summer — the list goes on. A ridiculously high number of plot points are fit into 45 minutes, and the episode is structured in a way that makes it feel longer than it is — in a good way. It's arguable that the climax comes when Luke says, "Welcome to the O.C., b*tch" after the beach fight, but seeing as the episode begins with a car chase and ends with a Ryan finding out his mom ran away, it's really just drama, drama, drama, info, info, info all the way through.

Here are nine instances of foreshadowing from the very first episode of The O.C. They just might make you want to watch the pilot all over again.

After Ryan and Trey steal a car at the very beginning of the episode, they get into a short-lived car crash that ends when a police car sideswipes their car in order to get them to stop. This is the same tactic Volchok ends up using during the car chase with Ryan and Marissa that resulted in her death.

Seth's Plan To Sail To Tahiti

During one of their first bonding moments, Seth tells Ryan that he wants to sail to Tahiti someday. And someday ends up being pretty soon, because after finally forming a relationship with the boat's namesake, he and Summer break up, and he attempts to sail to Tahiti at the end of the first season. As Season 2 shows, it doesn't end up working out and he takes a bus from Santa Barbara to Portland instead.

In the pilot, Marissa lies to two SEC agents who show up at her family's home looking for her father. It's very clear in this episode that he has some sort of money issues related to his job, but this episode also gives us a taste of what's to come in terms of Jimmy lying about things being not as bad as they actually are.

During the party before the charity fashion show, Ryan tries to order a 7 and 7. Later on in the season, Ryan's mom, Dawn, orders this same drink, showing where he picked it up from.

During the fashion show, Summer comes into the bathroom where Marissa is and says, "Look what I stole!" referring to two glasses of champagne. Marissa responds, "Look what I stole!" and it's an entire bottle of vodka. Later, at Holly's party, she adds more liquor to her drink when her friends turn the other way. This continues to be a theme for Marissa for many episodes to come.

Holly Being A Future Newpsie

Holly throws a bunch of parties at her family's beach house during the first season, including in the very first episode. If anyone seemed like they'd become a future Newpsie, it's her, and that ended up being just what happened, as shown when Summer meets up with Holly and the other "Newpsie-weds".

Marissa's friends drop her off at home after Holly's party and... just leave her passed out in her front yard. Ryan, being one of the only sensible people around this place, picks her up and puts her in the pool house. It mirrors two more iconic Ryan carrying Marissa moments to come: when he finds her passed out in an alleyway in Tijuana and right after the car crash when she dies.

The morning after Holly's party, Ryan cooks breakfast for the Cohen family. Kirsten enters the kitchen and says, "Is that bacon?!" She sounds really surprised at the idea of there being bacon in her kitchen, so it could be a hint at the many jokes about her not being able to cook that are going to start happening very soon.

Now, I guess you just have to watch the whole series to see how this all plays out.