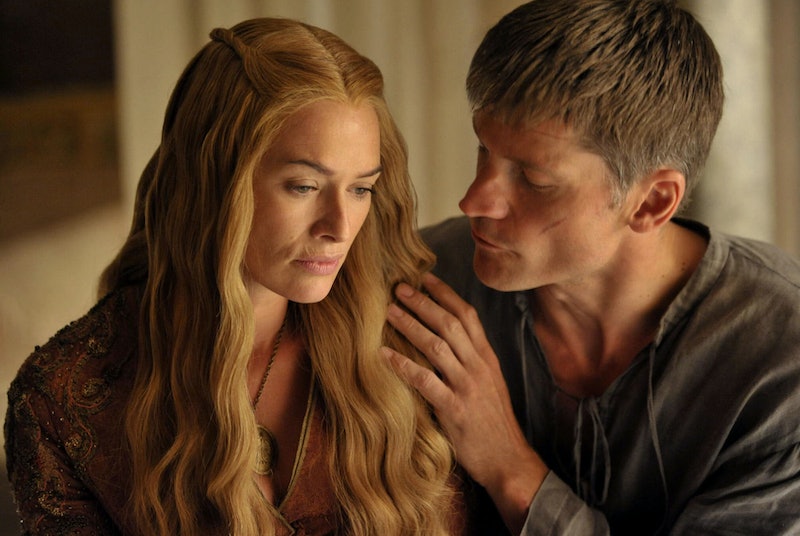 The best thing about an entire world being created in books and television is all the theorizing you can do about possible outcomes. I know I'm not the only who spends a lot of time thinking about and discussing Game of Thrones theories. One such theory is that Jaime Lannister will murder his newly queened sister. But I have to say, I think there are multiple reasons Jaime won't murder Cersei on Game of Thrones.

The Jaime-will-kill-Cersei theory comes from a prophecy shared with Cersei by a witch named Maggy the Frog in both A Feast for Crows and Season 5 of the HBO series. So far, a few parts of Maggy the Frog's prophecy came true — that Cersei would be queen, that her husband would cheat on her, and that all her children would die before her.

However, the book version and the TV version have one very interesting difference. The book also includes the line, "The valonqar [High Valyrian for "little brother"] shall wrap his hands about your pale white throat and choke the life from you." This clue makes it seem possible that Jaime Lannister is going to snuff the life out of his older twin. It's awfully convenient that the guy with the penchant for killing completely insane world leaders happens to be very capable of getting close enough to Cersei to strangle her. But stay with me here, guys. I've got some alternate ideas.

More like this
You’ll Definitely Recognise Both Of Ty Tennant’s Parents
By Maxine Harrison
'House Of The Dragon’s Theo Nate Is A “Massive” 'GoT' Fan
By Maxine Harrison
Nicola Coughlan Shared A Lady Whistledown Excerpt From ‘Bridgerton’ Season 3
By Grace Wehniainen, Alyssa Lapid and Sam Ramsden
This Episode 6 Moment Foreshadows Viserys' Fate On 'House Of The Dragon'
By Grace Wehniainen
Get Even More From Bustle — Sign Up For The Newsletter