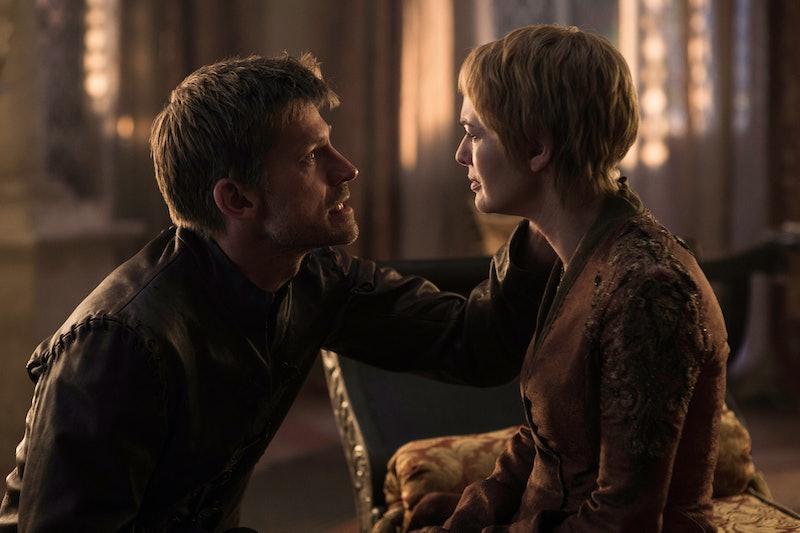 Bet you never thought that you'd be most interested in Melisandre after the Game of Thrones premiere, right? Theories are sure to be buzzing after the Red Woman revealed herself to be much older than she seemed. For example, is Melisandre the witch who Cersei visited on Game of Thrones ? Stannis may not be the only character that this woman has prophesied.

Back at the beginning of Season 5, a flashback revealed that as a girl, Cersei hear a prophecy from a witch — who promised her that in the future, she would have three children and that "gold will be their crowns" and "gold their shrouds." In the books, she is known as Maggy the frog. The crown part could be referring to their blonde hair, which is important to their parentage and fate in Westeros, but it could also be referring to the fact that they are all royal. So far, Joffrey and Myrcella have died, so the prophecy has almost completely come true.

Now that we know what we know about Melisandre, is it possible that these two characters are the same person? I would love it if Melisandre has been pulling strings for decades. It would also be incredible fitting, considering that the Season 6 premiere showed up a Melisandre whose faith in prophecy is faltering as well as a Cersei who seems to be finally believing it and giving in to her fate. I like the possibility that these are more than just counterpoints in the narrative. Don't you think that Melisandre would like to know that across the realm, one of prophecies is coming true? Watch out, Tommen. because even if Melisandre isn't that Witch, her Game of Thrones predictions are pretty much spot on.