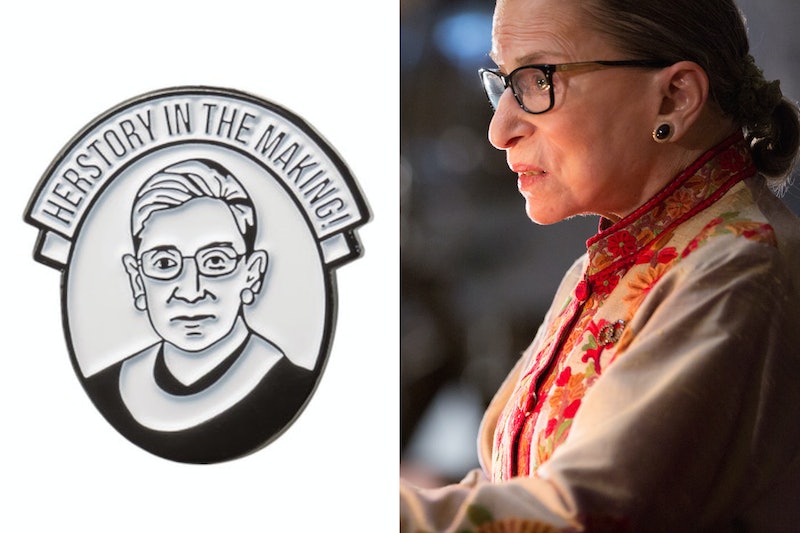 Mar. 15 is the 85th birthday of Supreme Court Justice Ruth Bader Ginsburg, she of "Notorious RBG" fame. Bader Ginsburg is an inspirational figure for hundreds of reasons, not least because she shows no signs of retiring from the Supreme Court or stopping fighting for progressive causes. In 2017, she declared herself a "flaming feminist litigator," and 2018 heralds her 25th year as one of America's most powerful justices; she's overseen some of the most influential legal battles in recent American history, from the fight for marriage equality to landmark ruling on gender discrimination and disability rights. So how do you show your appreciation for her on her 85th birthday? With some feminist, RBG-themed swag, of course.

Bader Ginsburg started out her badass career by becoming a lawyer, "when women were not wanted by the legal profession," as she states in the upcoming documentary about her life, RBG. She was appointed to the U.S. Supreme Court by President Bill Clinton in 1993, becoming only the second woman to be appointed to the office, according to TIME. (The first was Sandra Day O'Connor; today, RBG is joined by Sonia Sotomayor and Elena Kagan.) You can celebrate her incredible accomplishments by literally wearing them on your sleeve, on your mug, or by making a charitable donation in her honor. Happy 85th, RBG; may it be an amazing one.