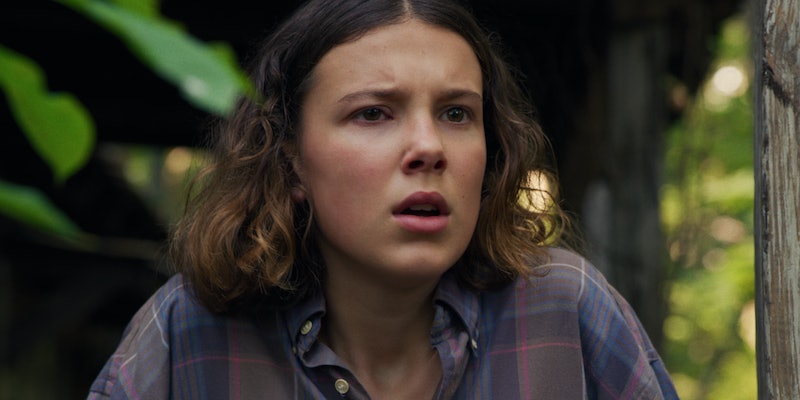 Spoilers ahead for Stranger Things 3. Stranger Things 3 left a lot of unanswered questions. Is Hopper really dead? Are Eleven's powers gone for good? Will the Byers family ever return to Hawkins? There's no telling when the show will be back, but in the meantime, there are already several Stranger Things 4 theories sprouting up on Reddit.

Technically, Stranger Things hasn't yet been renewed for a fourth season, but it's really only a matter of time. The show is a huge hit for Netflix, and it would be silly not to continue it so long as there's more story to tell. However, it is possible that Season 4 will be the series' last. Executive producer Shawn Levy told Collider in 2018 that while they definitely have plans for a fourth season, they don't necessarily know what, if anything, would be beyond that. "I mean, I will say we have a good sense of stuff that happens in Season 4. Season 4 is definitely happening," Levy said.

He also previously told Entertainment Weekly that there was "the possibility of a fifth" season, but "beyond that, it becomes I think very unlikely." In any case, once Stranger Things gets the go-ahead from Netflix about Season 4, the creators can begin tying up all those loose ends they created in Season 3. Until then, fans have Reddit to turn to for ideas about what's to come. Here are some of the major theories thus far.

It May Take Place Around Thanksgiving Or Christmas

Reddit user TheNotoriousAvocado pointed out that Mike and El talked about how he would visit her for Thanksgiving and maybe she and Will could come back for Christmas. The show loves centering its story around holidays, like how Season 2 came out around Halloween and Season 3 around the Fourth of July. Thanksgiving or Christmas makes a lot of sense for the next installment. Perhaps that means a winter 2020 Season 4 release?

Hopper Might Be "The American" That The Russians Have

Many have theorized that perhaps Hopper was "the American" in the Russian jail cell during the end credits scene. That theory becomes even stronger when you remember (like user Hexa420 did) that the Russian man chasing Hopper has already called him "the American."

The end credits scene is an obvious hint that Hopper is still alive — even if it is a red herring. But user embattle found yet another a compelling clue that Hopper isn't dead. In Season 1, when Will's "body" is found, seemingly confirming he's dead, the song "Heroes" by David Bowie plays. And in Season 3, when Eleven reads Hopper's letter, that same song plays. "You don't think they've chosen the song KNOWING they used it during ANOTHER character's fake death scene?" the Reddit user asked. "Coincidence? I HIGHLY think not."

Hopper Could Become The Season 4 Villain

What's worse than Hopper being dead? Hopper being alive, but evil. Conor_mc7 speculated that perhaps if Hopper is "the American" trapped in Russia that he could potentially be brainwashed into helping the Russians out. A showdown between El and her adoptive father in Season 4 is just devastating enough to potentially happen. Although, hopefully the creators don't hate us that much.

Hopper May Have Gone To The Upside Down

HystericalXD theorized that Hopper could have jumped through the gate as it was closing and ended up in the Upside Down, rather than being captured by the Russians. It would explain where Hopper disappeared to (and why we didn't see his body). Additionally, Logical_Armadillo speculated that the reason El lost her powers was so it wouldn't be possible for her to use her abilities to figure out where Hopper is.

Dr. Brenner Could Also Be The American

Alternatively, mart_btar theorized that Dr. Brenner is the one being held captive by the Russians. This is plausible since it was mentioned in Season 2, Episode 7 that Brenner may not actually be dead. Considering how much firsthand knowledge he has of El and her powers, he would be a great asset for the Russians to have in their quest to open the gate. Plus, the actor who plays him was at the Stranger Things 3 premiere. Perhaps he's coming back?

Season 3 was set in 1985, and you know what happened shortly afterwards in 1986? Reddit user blank_U correctly noted that the Chernobyl disaster occurred in 1986. The user theorized that with all the Russian involvement in the series, the show could potentially focus on or at least reference the catastrophic nuclear meltdown.

The Show Could Address Time Travel

For a show with interdimensional monsters, time travel is really the next logical step. At least, that's what Reddit user ThinkThink23 theorized. In the event that Hopper actually died, the kids and/or Hopper could go back in time to undo the chain of events that led to all the Hawkins drama in the first place. The Reddit user further noted that Hopper's letter to El had a reference to turning back the clock, and the show also spent a lot of time talking about time travel movie Back To The Future in Season 3.

Eleven Could Die In Season 4

A popular idea that both TheNotoriousAvocado and Logical_Armadillo mentioned in their other theory posts is that El may die trying to defeat of the Upside Down monsters once and for all. With her powers already weakened, the Season 4 threat may prove to be too much for her, and she may have to use all her energy to overpower them. It would be the ultimate sacrifice to save her friends and family.

This theory is further backed up by the fact that the show almost killed El in Season 1 in that very same way. "Eleven was going to sacrifice herself to save the day," co-creator Ross Duffer said, per ​Esquire. "That was always the end game."

If that's still the direction the show is going in, expect it to be in the final season — whether that's the fourth or fifth installment — because that's a series-ending act, not a season-ending one.

More like this
'Stranger Things' Season 4 Volume 2 Trailer Teases New Episodes Coming July 1
By Grace Wehniainen and Gabrielle Bondi
Who Could Die In The Stranger Things Season 4 Finale?
By Kadin Burnett
The 24 Best K-Dramas To Stream On Netflix Right Now
By Alyssa Lapid
'Stranger Things' Star Joe Keery Ditches The Upside-Down With New Single "Change"
By Radhika Menon
Get Even More From Bustle — Sign Up For The Newsletter