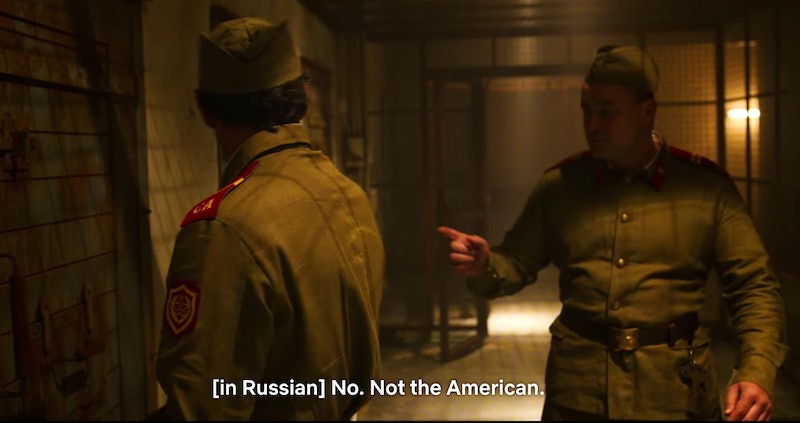 Spoilers ahead for Stranger Things 3. Despite Stranger Things 3's heartbreaking final minutes, fans have been holding onto the hope that Hopper is still alive. In the end credits scene, the Russian guards harboring a Demogorgon briefly mention they're holding an "American" in a cell, and fans are convinced it's the beloved police chief. But what if the American in Stranger Things 3 isn't Hopper, and is instead another character once presumed dead? Like, say, Eleven's evil scientist "papa," Dr. Brenner?

First, let's review why viewers are so convinced the American is Hopper. When Joyce turned the keys to shut off the Russians' device and re-close the gate to the Upside Down, an explosion was caused. When we saw this at the start of the season, everyone next to the machine was incinerated. Hopper was also standing directly next to the machine, and it's clear from Joyce's emotional reaction that she thinks the blast killed him. However, while Hopper is MIA after the fact, we don't ever see his remains, as we did when the other scientists were killed. And it's a cardinal rule on television that if there's not a body, that person is still alive. That combined with the end credits scene, and immediately, fans took to Twitter to declare that Hopper, surely, must be "The American." But that may be a red herring.

Dr. Brenner hasn't been seen since Season 2, and even then it was just in Eleven's mind. He was last physically seen being attacked by the Demogorgon in Season 1, but Stranger Things director Shawn Levy confirmed to Collider that "it now seems clear that Brenner is alive, Brenner is out there." Him being the "American" would explain how the Russians knew to access the Upside Down from Hawkins, and Brenner would be worth a lot more to them alive than as Demogorgon food. However, if it is Brenner who's the American, that doesn't mean Hopper is dead.

Redditor HouseHeisenb3rg believes that Stranger Things is pulling a "triple fake-out." The user suggests that the show's writers wants fans to think that Hopper is the American, only to reveal that it's Dr. Brenner and have them think he's dead, only to then reveal that Hopper is alive, but has been hiding out in the Upside Down. Right before Hopper and Joyce's "eyes meet and they both know what needs to be done," HouseHeisenb3rg writes, "Hopper turns to look at the Gate when he realizes there's no way to get back to Joyce. This is when Hopper made his decision. He knows that escaping to the Upside Down is a perilous decision, considering there are no more gates and no known ways of getting back. But it's his only shot. He's doing what he repeatedly told his daughter to do; keeping the door open 3 inches."

HouseHeisenb3rg further explains that this is the reason the writers made Eleven lose her powers. If she still had them, she'd be able to use her abilities to look for the still-alive Hopper and discover he's still alive. Season 4, then, will be about her and the rest of the gang's quest to get him back — and stop the Russians once more.