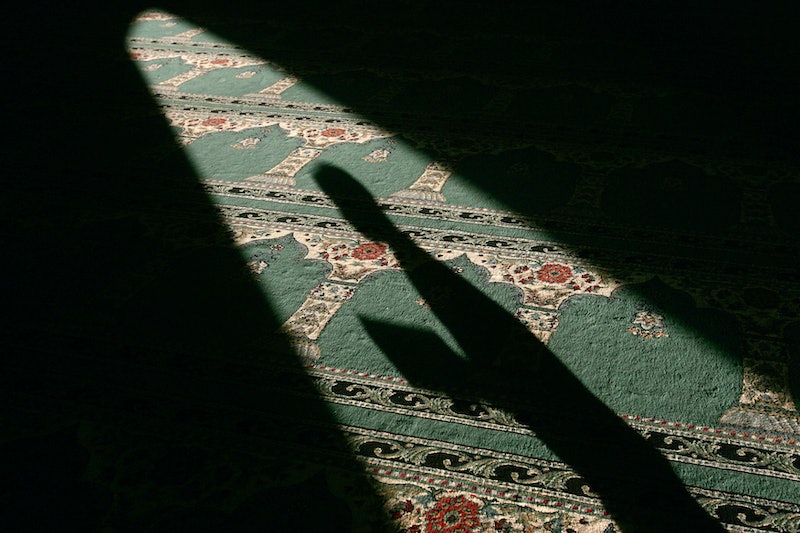 From Ouija boards to ghosts appearing in mirrors, countless people throughout history (and today!) have reported having ghostly encounters of all kinds, and it's as fascinating as it is freaky. Given that Reddit allows anyone to share their thoughts, you can find hoards of terrifying and allegedly-true tales about paranormal experiences from people all over the world that will give you shivers. And if ghostly fiction is your thing, there are many threads where talented horror writers share their creative scary stories, as well. But fair warning: If you do decide to start spooky story surfing on Reddit, prepare to fall down a black hole of horror that will suck up hours of your time (and potentially leave you terrified and jumpy for literal days).

So whether you're a straight-up ghost addict or just a regular ol' person who like the occasional creep fest, these ghostly tales posted by Reddit users will scare your pants off — and give you lots of good paranormal material to share with your friends when you're telling freaky stories post-Halloween festivities. And for the record, if you spook easily, I recommended reading these with the lights on.

Never Play With A Ouija Board

"Something happened to me as well." ... He recalled that he was sleeping one night when he woke up feeling really uncomfortable. He described his vision as having TV-like-static, and a feeling of heaviness surrounded him. He looked around the room and that's when he saw, a bloody, charred face, with piercing red eyes, grinning at him through the window... (via celluloidaddiction on Reddit)

I've had my own unexplained experiences with Ouija boards, so this allegedly true story sent straight-up chills down my spine. According to the story, a group of high school kids met up around Halloween to play with a Ouija board and see if it would actually work. Unfortunately, it worked too well, and almost everyone involved apparently ended up having some deeply disturbing (and in some cases, near-deadly) experiences that are still fully unexplained. Were they a result of a ghost sent through the Ouija board? You'll have to ready the story in full to decide for yourself.

"Did you fall off the shelf?" I asked him quietly. I must have put him back too close to the edge earlier and gravity had done its duty. I gave Fran a gentle squeeze. "Get out." I stared down at the bear and blinked once, very slowly. I must be more sleepy than I realized, I thought. I was hearing things. To prove to myself that it had just been my imagination, I squeezed him again. "Get out." It was still Grandpa's voice, but instead of the soft warmth it had always had, it sounded cold, almost menacing... (via Pippinacious on Reddit)

In this hauntingly creepy tale, the ghostly presence of dead family members appear to live on in the form of stuffed animals — which, if you didn't already have enough reason to be terrified of your childhood toys, could certainly cause you to hide away your precious plushies. But in a bone-chilling plot twist, it turns out that perhaps the ghosts are the least of the narrator's worries. Read for the full creepy tale.

Grandma's Light Is Always On

An elderly woman was crouched in the corner, her gaunt back to me. She was scratching at the floor where the walls met, stopping every few minutes to cock her head. A gnarl of dread unfurled in the pit of my stomach. ... Her eyes were solid black, bottomless pits that didn’t reflect the moonlight. Her jaw hung impossibly open, unhinged, and the dark tunnel of her mouth spiraled down into her throat. I had a moment to realize who she was, to recognize the familiar map of wrinkles in her face, the curls of her wispy hair... (via Saint_Entropy on Reddit)

Ever heard of a ghost light? Apparently some people believe that keeping a particular light on at all times can keep the spirits of the dead from entering our realm. In the case of the fictional Reddit story titled "Grandma's Light Is Always On," the storyteller's grandma held this belief close throughout her life — and in the story, which you can read in full here, he eventually (and terrifyingly) finds out why.

His cloak was black. Not the color black, but its essence. It was as though seeing a tiger after a lifetime of looking at a child's crude drawing and thinking that's all a tiger was. Reality flowed around his scythe like a brush through water colors, and I could see each elementary particle and time itself sunder across its blade. ... This is why we were taught without words to fear death. (via TobiasWade on Reddit)

Countless stories are told about the Grim Reaper, or the ghostly being who allegedly ushers you to your death. In this spine-tingling tale, the narrator has a haunting encounter with the Grim Reaper himself, and with vivid descriptions, we get an idea of what such an encounter might feel like — but it's not what you'd think. Get ready for an existential, brain-twisting ending on top of the scare. Read the whole thing on Reddit.

I Had An Encounter With A Chalk-White Giant

I saw a vaguely human-looking being that was between 10 and 14 feet tall. It was sitting down. Its face was very snake-like. It looked like an alien. It looked like a demon. It had chalk-white skin. ... It seemed gaunt, but it's entire body was covered by the enormous, black, hooded robe that it wore. It stared at me very intensely... (via gnoway520 on Reddit)

This allegedly true account of a person's encounter with a large, white, ghostly being is absolutely haunting — as are the user comments that post theories as to what origin this mysterious, telepathically-communicative being might be. While we're not sure if this encounter was with a ghost, demon, alien, or something else, we are sure it'll scare the crap out of you. Read this short account in full, if you dare.

The Man In The Mirror

I used to visit my friend at her house out in a rural farming area before she moved. I'd sleep over a lot, and we'd just hang out and draw. I usually slept in the living room on the couch, and there were two mirrors in the room fairly close to the tv. When the tv was off and I was walking by, I started seeing shadows move behind me. I thought it was just a warped tv screen or something. Then, one evening, I walked into the living room to get my sketchbook so I could sketch in her bedroom. I bent over and picked it up, stood up straight, looked in the mirror, and there was a man behind me... (via parolemodel on Reddit)

Ghosts appearing at friends' houses during sleepovers and objects moving on their own? It's a terrifying prospect that I think every kid is petrified of when they first start spending the night in foreign houses. And when you find out that the house's previous owner was murdered there? It gives the strange activity some context in the worst way possible. This scary and allegedly true ghost story on Reddit is every kiddo's nightmare. You'll have to read the rest to find out what happens.

It was still dark out, and rainy. My daughter told me that the ghost was on the back deck, and then she told me that today was the ghost's birthday and she wanted to sing him Happy Birthday. Once again, I mostly disregarded what she was saying ... [s]o we sang and wished the ghost a happy birthday and went on with our lives. ... Later that day, out of pure curiosity, I looked up the obituary of the man who had died in our house. And wouldn't you know it? It was his f*cking birthday. (via patentspatented on Reddit)

OK, so apparently some ghosts are nice and not out to do any harm and just want to chill in your house and commune with children. Chill or nah? Either way, it happens, and this allegedly true ghost story involving a man, his daughter, and the ghost of the home's dead former tenant is benign but also scary AF. Read the whole thing and prepare to be freaked the heck out.

Why You Shouldn't Leave Your Kids Alone Around Mirrors

I'll never forget what I saw that night. My breath caught in my throat. A craggedy hand with long pale fingers reached out from beneath the curtain and was pulling on the thumb tack. I threw the covers back over my head and waited for the bad thing to go away. Seconds passed like hours. (via nohopenosleep on Reddit)

A fear of mirrors is definitely a thing — I mean, I avoid looking at them at all costs if I'm in a dark/creepy place. Sensible, right? Perhaps it's all the youthful years of playing "Bloody Mary" at sleepover parties. In any case, if you've gotten over a fear of mirrors in the dark (or never had one in the first place) prepare to reignite the horror, because this bone-chiller of a story is straight up terrifying. Read it in full if you dare.

That was when I saw it. There was a large white figure in my doorway, just hovering, and pulsating a white aura. I quickly panicked, and began calling out for my brother (his room was across the hall). The figure glided to the end of my bed and just sat there, watching. I'm not really sure how much time passed, but the figure suddenly vanished, sound came back, and the euphoria disappeared. I jumped out of bed and ran into my brothers room where I practically flew into his bed. ... I was hysterical and just kept telling him it was a ghost... (via No_Bees on Reddit)

Many real-life ghost stories and other unexplained phenomena often involve family members who have passed on — but in this case, the storyteller experiences a ghost that was more like a prophecy. Read this terrifying and supposedly-true tale in full for a majorly unexplained, paranormal thrill.

More like this
10 Pumpkin Recipes That Are Way More Creative Than Pie & Lattes
By Rebecca Deczynski and Alexis Morillo
Bennifer, Kravis, & 14 Other Fun Celeb Couples Halloween Costume Ideas
By Emma Carey and Brittany Leitner
6 'Game Of Thrones' Halloween Costumes That Aren't Overdone
By Nina Kahn
12 Easy Halloween Costumes You Can Wear With A Denim Jacket
By Kirsten Nunez and Bustle Editors
Get Even More From Bustle — Sign Up For The Newsletter