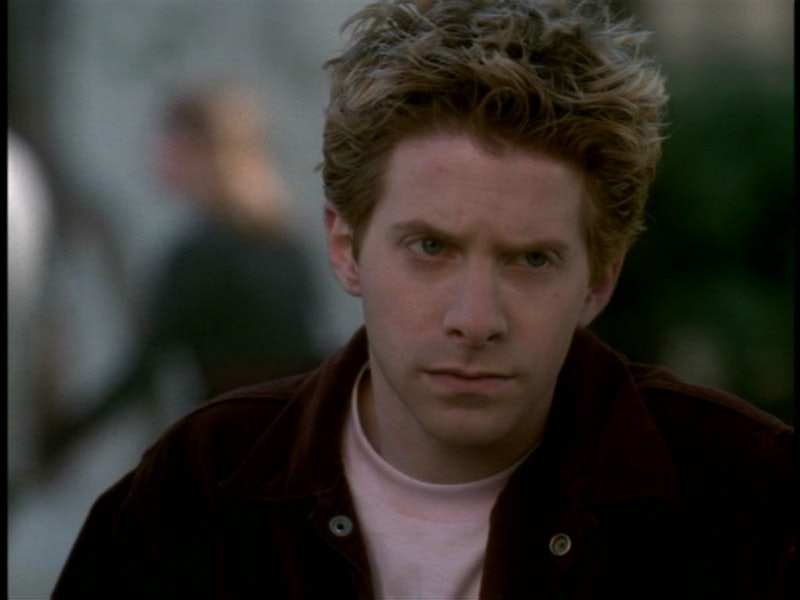 Fans of Buffy The Vampire Slayer know that the show is cause for many debates. You can fight on if the series was actually all a dream, or who was the best Big Bad. Possibly the most contested question of all is Team Angel or Team Spike, but while there are many ways to go about answering that, let's pose this question: What about Team Oz? After all, Oz is the most underrated character on Buffy The Vampire Slayer and the world needs to realize this.

Oz, aka Daniel Osbourne, is introduced during Season 2 of the popular series. While he's only on the show for three seasons, he really makes a splash due to his super dry humor, hilariously calm voice, and his overall cool-but-not-too-cool-guy demeanor. Oh, and also the fact that he's a werewolf. Oz is also adorably in love with Willow (and the feelings are mutual, if for a time) while he's on the show.

Sadly, his wolf-y traits force him to leave, and as everyone knows, Willow's true soulmate turns out to be Tara. Still Oz holds a very special place in every Buffy fan's heart. There are too many great moments to choose from, but here are just some of the many times that prove Oz deserves all the love from Buffy viewers.

1. The Way He Just Falls For Willow

From the moment he sets his eyes on Willow, Oz is totally enamored with her. When he first spots her in Season 2, he's onstage playing with his band, Dingoes Ate My Baby, and he spots Willow in all her puffy coat glory. She's dressed in a huge parka, fur and all, and Oz notices her from across the room. When they actually meet, it's over canapés, and if that's not love, don't tell me otherwise.

As the guitarist for his band, Oz is often seen ripping on his guitar. Even if you're not one to be a groupie, you have to admit that this makes him so freakin' cool. His music skills also give him access to things like a van, which is very important for teen slayers. Oz also never lets his guitar-playing coolness define him, and always makes time for his friends.

As Buffy is a show about vampires, it makes sense that there are multiple Halloween episodes. "Fear, Itself" is one of the more memorable ones. The Scooby Gang is spending their first All Hallow's Eve in college, and while Buffy is Little Red Riding Hood and Willow is Joan of Arc, Oz goes as God, and that's just legendary. Who knew a name tag could mean so much?

4. The Oz-Like Way He Deals With Discovering He's A Werewolf

In Season 2, when Oz is first introduced, the audience doesn't know he's a werewolf. He doesn't even know he's a werewolf. It's not until the 15th episode when he puts two and two together that he's the creature. He finds out that his little cousin Jordy, who bit him, is a wolf as well. Upon learning this, though, Oz does show a little freakout in the face — which is much more than he usually shows. Totally chill.

5. When He Explains Exactly What Ice Is

Not much needs to be said here except that Oz should really teach a science class. The waiting list might end up being long, but the lectures are sure to be short and full of knowledge.

6. When He Helps The Scooby Gang As A Newbie

Willow and Oz are just starting out their soon-to-be relationship when Angel turns evil (aka into Angelus) after sleeping with Buffy. This obviously is a danger to everyone, and Oz steps up to help stop some of Angelus' plans. One of them is to bring the unstoppable Judge back to life, but Oz drives the getaway car to the military base where Buffy picks up the rocket launcher that ultimately defeats this would-be Big Bad. Oz also is the one who comes up with the plan to check out the Sunnydale Mall for their enemies, and he turns out to be right.

7. All The Times He's The Most Popular Guy On Campus

When the Scooby Gang — minus Xander — start college in Season 4 at UC Sunnydale, Oz has a leg up from Willow and Buffy. While they start off busy and overwhelmed, Oz is already saying hello to everyone and is on a first name basis with many students. While he tries to say that he too has no idea "what the hell is going on," he clearly is well prepared for college thanks to his band having played there a ton.

8. When He Leaves Willow

Because Oz is a werewolf, he ends up choosing to leave Sunnydale — and Willow — behind after sleeping with and killing another werewolf, Veruca. When he's in wolf form, he realizes that he's a danger to Willow and others, and he needs to find himself. While his departure ends up good for Willow in the end (she falls for Tara and that's beyond magical), in the moment is is heartbreaking. Oz is doing a pretty selfless thing, and he'll forever be loved for it, even if the break-up is a bit harsh.

9. Literally Any Time He Says Anything

Oz is a just hilarious. He's always on top of his one-liner game and he can steal a scene with just one little sentence. Don't believe me? Here's some evidence.

Whether you've watched Buffy forever and are now just seeing the genius that is Oz, or you've never watched a single episode but will now because Seth Green kills in this role, you now understand why Oz is just the best. Go off and bathe in your newfound love for Oz, werewolf at night and epic human during the day.