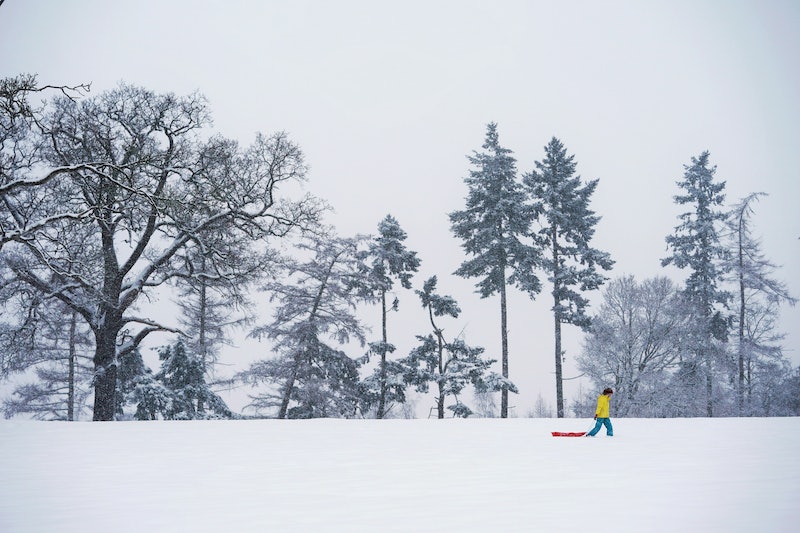 I'm sure your top concern as we approach the upcoming winter solstice may be just how many more minutes of sun you're going to get during your commute each day, but the truth is that the event is steeped in history and tradition that goes far beyond our modern taste for convenience and, well, light. With history, of course, comes superstition, so I did a little research and pulled together some details about some winter solstice superstitions, where they come from, what they mean, and how they play into the way we observe the month of December in modern times (if at all).

First, a brief lesson in what the winter solstice actually is: According to the trusty Farmer's Almanac, it's the day each year that has the fewest hours of sunlight, thanks to the fact that the sun reaches its southernmost point and begins moving north. The winter solstice is also the first day of the astronomical winter (the meteorological winter kicks off several weeks earlier). Since 2017's winter solstice will take place on Dec. 21, the days will begin getting longer as of Dec. 22. Did I just make your (very short) day?

Now that we've got the basics down, check out these superstitions.

1. Dark Spirits Walk The Earth During The Winter Solstice

Shab-e Yalda — the Iranian festival that celebrates the birth of the ancient sun god who triumphed over darkness — is celebrated on the longest night of the year, aka the winter solstice. To observe the festival, a feast of watermelon, nuts, and pomegranate seeds is consumed... but that's not all. Because of the light vs. dark symbolism, ancient lore holds that evil spirits wander the earth on this night stronger than ever, according to MentalFloss. There are shades of similar superstitions in Celtic and Germanic folklore too.

2. The 2012 Winter Solstice Should Have Been The End Of The World

Remember the 2012 end of days hysteria? Thankfully, it was nothing more than a superstition — but it was a superstition rooted in Mayan history. The winter solstice of that year (Dec. 21, 2012) corresponded to the date 13.0.0.0.0 on the Mesoamerican Long Count calendar and was the end of a 5126-year cycle. According to the superstition, these numbers were symbolic of the end of the world, or some other catastrophe.

3. The 2012 Winter Solstice Should Have Kicked Off A Worldwide Transformation

The flip side of the "Winter Solstice as the end of days" coin? The New Age belief that the significance of Dec. 21, 2012 was one of rebirth and transformation. Some believed that the Earth and all of its inhabitants would experience some sort of wonderful metamorphosis on that day.

4. The Winter Solstice Honors The Coming Of The Light

If you've been counting the minutes until you can leave the office when it's still light outside, this one should make a lot of sense to you. Given the fact that the winter solstice marks the time of year when days begin to get longer, this superstition is far from difficult to explain. What is interesting is the extent to which multiple cultures have honored and embraced it at a religious and spiritual level over the years. Pagan communities, in particular, were known to celebrate the occasion for weeks prior to the actual solstice. Modern Wiccans celebrate the solstice by meditating near candles at lighting yule logs.

5. There's A Connection Between The Winter Solstice And Stonehenge

The history of Stonehenge remains largely unknown, but several links between it and the winter solstice have fueled this superstition. According to the Farmer's Almanac, some experts believe that the structure's design appears to correspond to the winter (and summer) solstice. When the sun sets on the solstice, it shines directly though the gaps in the rocks.

This one is part superstition, part fact. Since the winter solstice marks the day that the sun hits its southernmost point of the year before beginning its ascent north again, it does sort of stand still on this day — at least, to the naked eye. Today, we're able to view the phenomenon from space, and we know that this isn't entirely true, but ancient people had reason to believe that the sun really would stop moving on the solstice. The word "solstice" is derived from the Latin term for "the sun stands still."

7. New Worlds Are Discovered On The Winter Solstice

There's been an observable pattern of new discoveries made on the winter solstice. The pilgrims' arrival at Plymouth Rock, the discovery of radium, and the launch of Apollo 8 all occurred on Dec. 21. It's hard to ignore that something special is in the air on this day.

8. Holly Was Used To Protect Against The Dangers Of Winter

According to International Business Times, Ancient Romans used holly to decorate their homes prior to the winter solstice in honor of the sun god Saturn. Since the solstice was viewed as a time to honor Saturn (Saturnalia), the plant was thought to have magical powers that would help protect people from harsh, hungry winters.

9. Christmas Was Celebrated On Dec. 25 To Replace The Solstice And Saturnalia Festivities

There's no actual date identified for Jesus's birthday in the Bible, so many suspect that Dec. 25 was selected as Christmas Day in an effort to squelch the debauchery associated with Saturnalia for the ancient Romans.