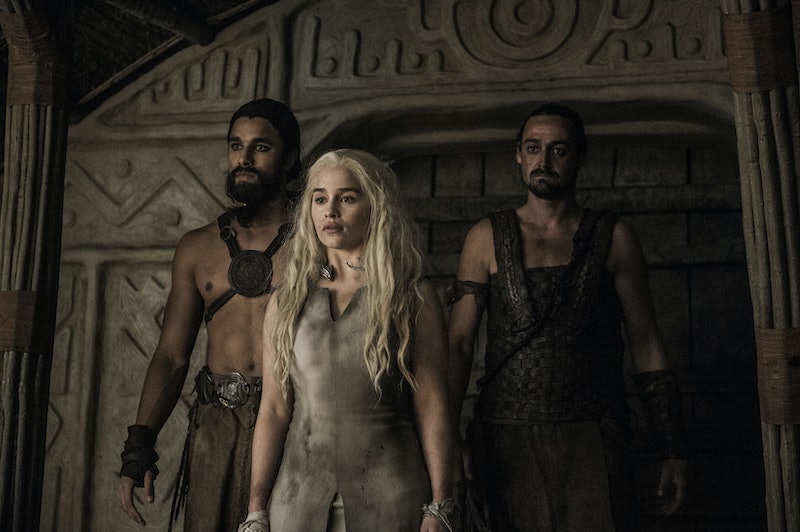 Even though Game of Thrones has officially ended its run on HBO, the show and its source material, George R.R. Martin's A Song of Ice and Fire series, will be around for a while yet. As reported by Newsweek on Tuesday, a new, $1,000 Game of Thrones book is sold out, but you can still get a cheaper version, priced at just $325, by pre-ordering today. The new books are illustrated re-releases of Martin's latest book, Fire & Blood, which tells the history of the Targaryen family — and is rumored to be the basis for the new Game of Thrones prequel series coming to HBO.

Dedicated ASOIAF and Game of Thrones fans know exactly who the Targaryens are, but here's a little backstory for those who are new to the fandom. More than a decade before the beginning of Game of Thrones, the Baratheon, Lannister, and Stark families worked to depose the "Mad King," Aerys II Targaryen, after his son and heir, Rhaegar, abducted 16-year-old Lyanna Stark, who was the object of Robert Baratheon's infatuation. Seizing the capitol, the agents of Robert's Rebellion ended nearly 300 years of Targaryen rule when Jaime Lannister killed Aerys II. Although they intended to kill all of the Targaryens, two of Aerys II's children, Viserys and Daenerys, escaped with their lives. At the opening of A Game of Thones, Daenerys is a 13-year-old girl — aged up to 17 in the HBO show — who dreams of restoring her family to their rightful place on the Iron Throne.

George R.R. Martin published Fire & Blood, an illustrated history of the Targaryen family, in November 2018. Now, the book is getting a "slightly oversized" re-release from Subterranean Press. Landing sometime this autumn, Subterranean Press' Fire & Blood includes all of the material contained in the original version, plus nine new illustrations — the frontispiece, one gatefold, and seven interior pages — from Prince Valiant artist Gary Gianni. All copies will be signed by both Gianni and Martin.