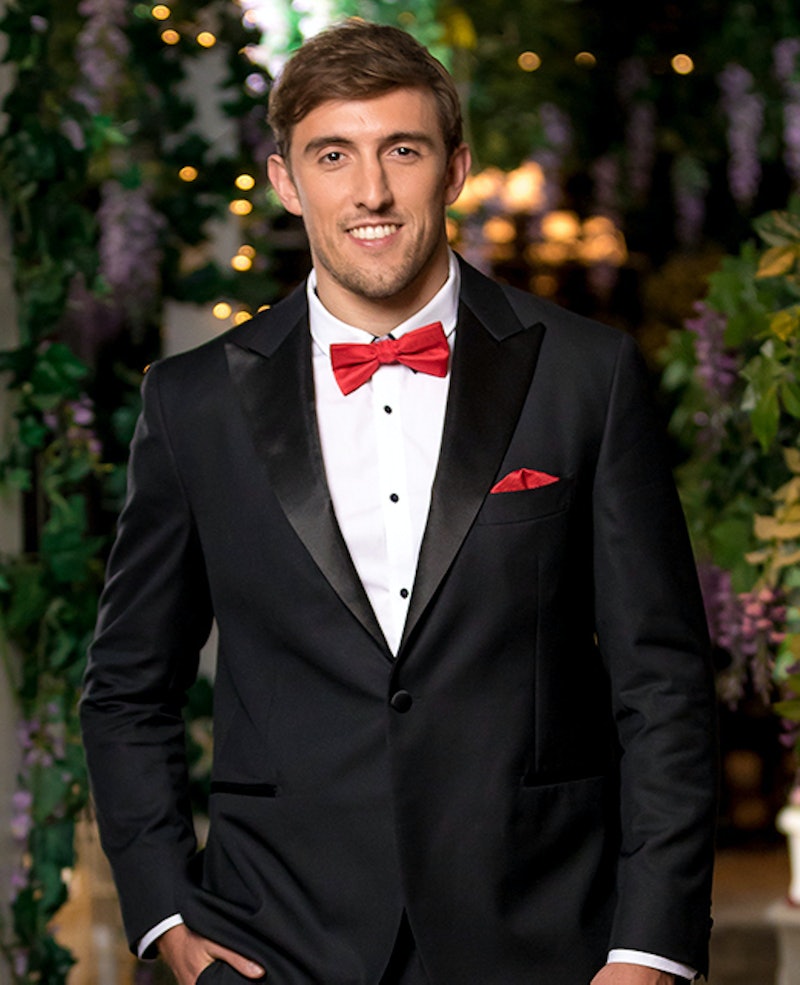 The Bachelor franchise is a gift that keeps on giving. Even when viewers really, really wish it would stop. Just this week, a Bachelorette Australia contestant's avocado fail went viral for this exact reason: It's so bad, it's actually amazing. And fans around the world had something to say about it.

On Oct. 24, a contestant on Bachelorette Australia named Ivan Krslovic was tasked with preparing a dessert, and it went about as poorly as it could possibly could have. "I've never made a dessert before," he admitted to the camera, "But it's just measuring and putting things into a blender." Not all desserts are made in a blender, but avocado and cacao mousse — which Ivan was supposed to make — is, so at least he was correct on this count.

"[The recipe] said to grab two whole avocados, so I grabbed 'em," Krslovic narrated, "And I put the whole lot in the blender." That's right, the Bachelorette Australia contestant really put two whole avocados into a blender. Not sliced in half. Not removed from its skin. With the pits included. He just dropped them into a blender to clunk around! "It said to [blend] it until it went smooth, so I was just gonna keep doing it," Krslovic told the camera.

Oh, and then this gloriously painful moment cut away to another great reveal: just outside the prep kitchen were Bachelorette Ali and another contestant, caught in an intense conversation. They heard everything.

If you've made it through the entire video, you've likely noticed that Ivan pulled it off. Did he figure out that the skins needed to be removed, and the avocado pitted, on his own? Not exactly. In Krslovic's own words, the producers had to get involved with his cooking.

After the moment went viral, the professional dancer made the rounds on Australian news channels to explain how he came to put two whole avocados into a blender. “I thought it was the blender messing up!” Krslovic told The 10 Daily:

“I was unplugging the cord, switching it on and off, I opened the lid up and looked, like ‘what the hell is wrong with this thing?!’ I was trying to move the pit around with my spoon trying to get it moving again!”

Per the Ten Daily website, Krslovic "blended everything except the pit”. Yes, everything.

Not only that, the Bachelorette Australia contestant said he "didn’t stop until the crew hinted to him that he needed to remove the [them] from the blender."

"After 15 minutes of letting me make a debacle of myself they were like [stage whisper] 'SCRAPE IT OUT!' And then I clicked and I was like 'Ohhh okay!,' and then I had another crack. There might’ve been some pit residue, though!"

Then he ate it and fed it to the competition. Hey, you know what they say! Keep your friends close, and your enemies close enough to eat your poorly blended avocado mousse on national television. Needless to say, fans were as horrified as they were entertained.

For the record, it wasn't his first encounter with an avocado. He'd just never seen one before it was prepared. Krslovic told The 10 Daily that he knew what avocado looked like "on top of [his] toast at a restaurant." Well, that's something.

Unfortunately, Krslovic was voted off at the end of the episode. Per Buzzfeed, the Bachelorette herself didn't make it clear whether Krslovic's avocado mishap was the cause, but if it was, any avocado fan will tell you that she was completely justified in her decision. Better luck next time!