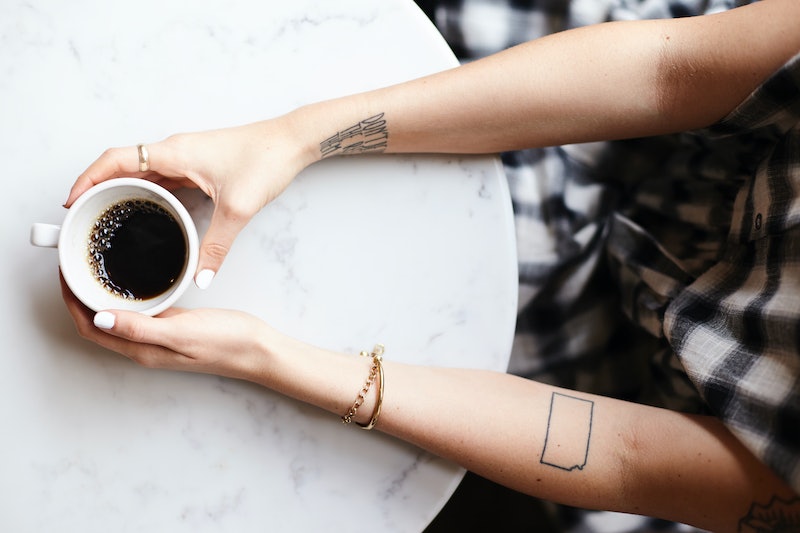 If you’re the kind of person who loves coffee, but finds it too bitter when served on its own without milk or sugar, good news: Scientists have created a beanless coffee that doesn’t have any of the bitterness that coffee brewed from roasted coffee beans usually does. The brainchild of food scientists Jarret Stopforth and entrepreneur Andy Kleitsch, Atomo, as it’s called, could be a game-changer for your morning cup of joe for more reasons than one. And according to the company itself, it could be on the market as soon as 2020.

This isn’t actually the first we’ve heard of Atomo; the company launched a Kickstarter earlier this year to jump-start the business, which led to widespread coverage back in February. Now, though, it’s back in the news thanks to a new interview with NPR’s The Salt — and it’s no wonder: Atomo sounds as delicious as it does innovative.

A food scientist who holds a Ph.D. in Food Microbiology from Colorado State University, Stopforth spent a number of years at big brands like Campbell and Chobani before moving onto companies like shelf-stable bone broth purveyor Kettle & Fire and keto- and paleo-friendly snack company BLOK Biltong. But it was just a few years ago that he struck upon the idea of creating a new kind of coffee — one that removed the bitterness from the drink, thereby negating the need to add milk or sugar to it. Said Stopforth to NPR’s Jodi Helmer, “I started thinking, we have to be able to break coffee down to its core components and look at how to optimize it.” So, together with Andy Kleitsch, Stopforth began reverse engineering what would become Atomo.

Although the coffee wasn’t originally developed specifically to deal with the looming global coffee crisis, Stopforth and Kleitsch also realized pretty early on that a beverage that mimicked coffee in every aspect except for its origin — coffee beans — could be beneficial in more ways than just the taste. “As we got deeper into the process, we learned more about the threats to the coffee world as a whole,” Stopforth said to NPR — things like deforestation, global warming, and the fungus known as rust.

Indeed, according to a Huffington Post report from January of this year, deforestation could totally wipe out 75 of the 124 species of coffee used to make the caffeinated beverage around the world. Both climate change and fungi and pests are also affecting crops in such a way as to make many varieties of coffee in danger of going extinct. In the wake of gaining this newfound knowledge, said Stopforth, “we were even more committed to making a consistently great coffee that was also better for the environment.” And, well… here we are.

According to Fast Company, there are roughly 1,000 compounds in roasted coffee beans, about 40 of which contribute to the unique taste of coffee brewed from those beans. But those compounds aren’t found only in roasted coffee beans; they’re also present in “other natural, plant-based ingredients,” as FastCo put it. As such, it’s absolutely possible to engineer a drink that replicates the taste, aroma, and mouthfeel of a cup of coffee without actually using any coffee beans to make it. Its creators won’t reveal exactly what’s in it — trade secrets and all — but for the curious, yes, it’s high-test. Caffeine gets added to the mix during Atomo’s creation process, per NPR.

The key, according to Kleitsch, turned out to have something to do with a family of compounds that occur naturally in both green and roasted coffee beans: Chlorogenic acid. Although chlorogenic acid has been linked to reduced blood sugar levels and may provide an anti-diabetic effect, it’s also what’s responsible for the bitterness and astringency of brewed coffee — especially in darker roasts. One of the early versions of what would become Atomo removed the chlorogenic acid, Kleitsch told NPR — and when they had Stopford’s wife taste it, said Kleitsch, she said, “This is what coffee should taste like.” Per Kleitsch, “it had the flavor and aroma of coffee without that bitterness.” Taste tests with students at the University of Washington were similarly positive.

Of course, Atomo is far from the only coffee-less coffee alternative we’ve seen before. Chicory, for example, has long been used to make limited coffee supplies go further, or else to substitute for coffee entirely when the supplies were so limited as to be non-existent. It’s what makes the coffee served at New Orleans mainstays like the Café du Monde so distinctive: During the American Civil War, blockades to New Orlean’s ports made coffee hard to come by — so folks began roasting and brewing chicory instead. In recent years, efforts have also been made to create coffee out of ingredients like mushrooms, with varying degrees of success.

Atomo, however, looks poised to corner the coffee alternative market in a totally unique way. The goal, say both Stopforth and Kleitsch, is to maintain the morning routine aspect of coffee-making as much as it is mimicking and improving upon the taste; as such, it’ll be available in ground forms that will be suitable for all the ways you’d typically make coffee — drip makers, French presses, even Keurigs. Development and production is continuing apace; according to a June 17 update on their Kickstarter page, Atomo will even soon have a brick-and-mortar headquarters in Seattle, as well. Located “in the Hill Climb to Pike Place Market,” the company’s home base will feature a demo kitchen where private tastings of the product will be held and a lab which is “view-able to guests so you can watch the action of Atomo being designed. The hope is to get Atomo on the market by 2020.

Will this beanless coffee continue to capture our attention the way its early news coverage has? Only time — and our taste buds — will tell. But it certainly does look like something worth paying attention to in the meantime, so I’ll raise my mug to that!

More like this
How To Make The Watermelon, Feta, & Mint Salad Trending On TikTok
By Emma Garza
Starbucks Released New Menu Items For The Summer
By Emma Garza
A Beginner's Guide To Drinking Whiskey
By Alexis Morillo
How To Make A Dirty Shirley Cocktail
By Emma Garza
Get Even More From Bustle — Sign Up For The Newsletter