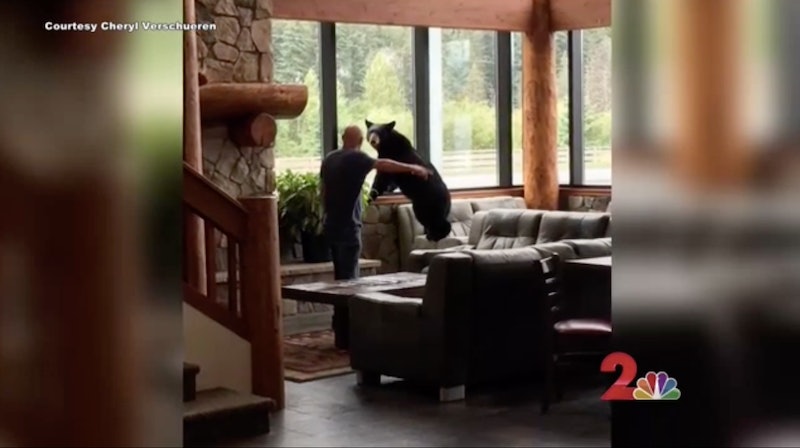 I don’t know about you, but I’ve always wanted to visit Alaska. The wild beauty of the state has intrigued me since the first time I watched Balto all the way back in 1995. I wasn’t drawn to one specific Alaskan town until recently, though. In fact, I’ve pretty much always thought more about the wilderness of Alaska than the people who live there — but after reading about how the folks of Seward, Alaska treat curious wildlife, the town has definitely earned a spot on my travel wishlist.

On Sept. 10, a black bear walked into a hotel in Seward, and the hotel's staff treated like an extremely Not Big Deal. Evidently, the not-so-little guy moseyed right on into the hotel through a door that had been left propped open for cleaning staff, but the bear was so polite about it that one hotel employee, Cheryl Verschueren, didn’t realize he was there at first. “I just looked over and thought 'how did the bear get here?,' Verschueren told KTUU last week. Verschueren was reportedly running the front desk at the time, but she was able to reach her co-worker, Phil Valenza, who helped her coax the bear out of the living room.

Valenza, who does maintenance work for the hotel in question, the Breeze Inn, told KTUU he was a little bit nervous about confronting the fluffy predator — who had parked his butt on a sofa by this time — but it turned out that Valenze didn’t have anything to worry about. “I'm looking at him dead in the eyes, which way you gonna go?" said Valenza. "There's one picture (taken by hotel staff) where I'm reaching in my back pocket. I carry a pocket knife, and I'm reaching for that and I'm thinking 'well, that's not gonna help you a whole bunch.'" After Valenza spent some time trying to communicate with the bear, he and some other hotel staff propped open the Breeze Inn’s front doors and coaxed the fuzzy dude right out of there.

The curious black bear wasn’t done sneaking around Seward, though. Mystery bear managed to find his way into Chinhook’s restaurant the very next day, but he didn’t stay long. “So, there was some guests that were coming to join us at the restaurant, and this was what they were greeted by ... a bear coming out of our front door," Chinhook’s co-owner, Hillary Bean, reportedly told KTUU as she played a video of the bear running out Chinhook’s front door. Bean also told KTUU the friendly beast came back later that day just to stroll the restaurant's back walkway.

Luckily, no one was injured throughout the whole two-day ordeal. In fact, the townsfolk of Seward seem to be more concerned about what might happen to the bear than anything. "I don't know what the outcome is going to be" Verschueren told KTUU. "I'm kind of afraid, because he's a cute little bear. He may get shot, I hope not.” So far, it doesn’t look like Verschueren has anything to fear. As of last Tuesday, no one had reported the multiple encounters to the Alaska Department of Fish & Game, so currently, no action involving the bear is planned.

One thing is for sure, though: If any harm befalls the now-internet-famous bear, it won’t come from the people of Seward. And personally, that right there is enough of a reason for me to be interested in visiting Seward someday. Any town that chooses to show compassion and patience to a literal wild bear — especially when so many people would opt to shoot an animal of his size on sight — must be full of kind people. Here's hoping I get to find out for sure one day.

More like this
Picky Eater? Sensitive Stomach? This Vet Nutritionist-Designed Dog Food Has A Plan For That
By Maria Cassano
Dog Trainers Say These 30 Cheap Things On Amazon Are Pure Genius
By Allison Bolt
Amazon Keeps Selling Out Of These Pet Products Because They're So Freaking Cheap & Clever
By Sara Brown-Rigoli
Ashamed Of Your Screen Time Stats? Here's How To Change That
By Alexis Morillo
Get Even More From Bustle — Sign Up For The Newsletter
From hair trends to relationship advice, our daily newsletter has everything you need to sound like a person who’s on TikTok, even if you aren’t.