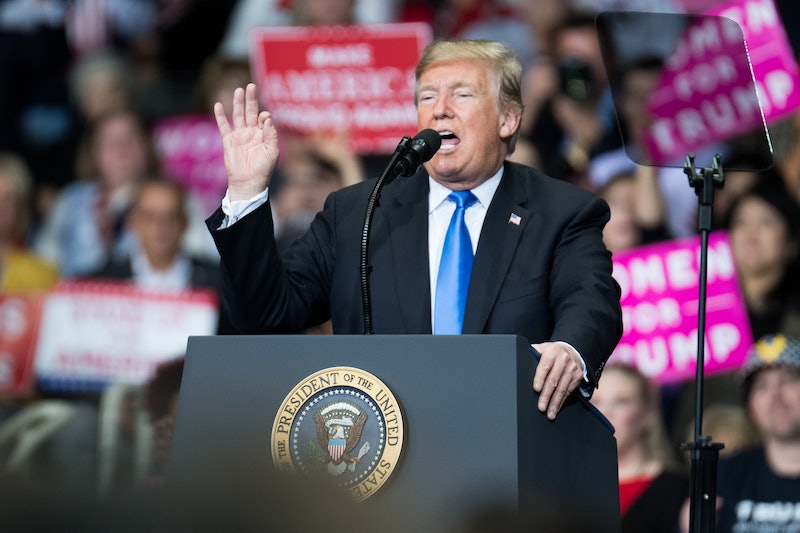 During a recent eBay auction, a bible Trump signed during a 2016 rally got sold for hundreds of dollars. While this bible was put up for sale, it turns out that there are likely many other bibles bearing Trump's signature as well. As the Associated Press (AP) reported, Trump signed several bibles as recently as last week when he visited Alabama to meet with those who survived the state's deadly tornado outbreak earlier this month.

Alabama.com noted that a bible reportedly signed by Trump sold on eBay for $325, though it was listed for $525. The bible was sold by a user named GraphwizardCollectibles, who said in the listing that the holy book was obtained in-person and comes with a certificate of authenticity to verify the president's signature. The listing noted that the bible is a 4.5 inch tall "mini bible."

As Newsweek reported, the bible represents just one of many items seemingly bearing Trump's signature that are available for sale on the website and through other online auction houses. For example, the outlet pointed out that a Washington Nationals baseball reportedly signed by Trump is being sold for $295. Alabama.com added that a book Trump signed for his parents is available on eBay for $25,000.

According to the AP, bible signing is a somewhat traditional practice among American presidents, though the outlet noted that past presidents often signed and gave bibles as gifts to convey a spiritual message. For his part, Trump recently signed a host of bibles at the aforementioned event for tornado survivors at the Providence Baptist Church in Smiths Station, Alabama, the AP noted.

Trump's decision to sign bibles at this event drew some controversy, the outlet reported. Some religious leaders defended the president's actions, while others critiqued him for signing the holy book. Reverend Donnie Anderson, the executive minister of the Rhode Island State Council of Churches, told the AP that she was displeased with Trump's decision to sign bibles because she saw it as a political tactic. As Anderson told the outlet:

For me, the Bible is a very important part of my faith, and I don’t think it should be used as a political ploy, ... I saw it being used just as something out there to symbolize his support for the evangelical community, and it shouldn’t be used in that way. People should have more respect for Scripture.

However, others were supportive of Trump's actions. Bill Leonard, a Baptist historian and the founding dean at the Wake Forest University School of Divinity, said that the president provided a teaching moment. "I thought probably this generation of Baptists and others didn't know about the tradition of people having others sign their Bibles," Leonard told Baptist Press. "That was a kind of historical qualification ... I thought would be worth talking about." He added that Christians residing in the southern United States often have bibles signed by prominent figures, like preachers. "It wouldn't be unheard of that presidents, particularly coming to events that were celebrative or traumatic, would do that," he added to Baptist Press.

President Trump's decision to sign bibles has drawn attention for a variety of reasons. Amidst this attention, it will be interesting to observe whether the president continues the practice.