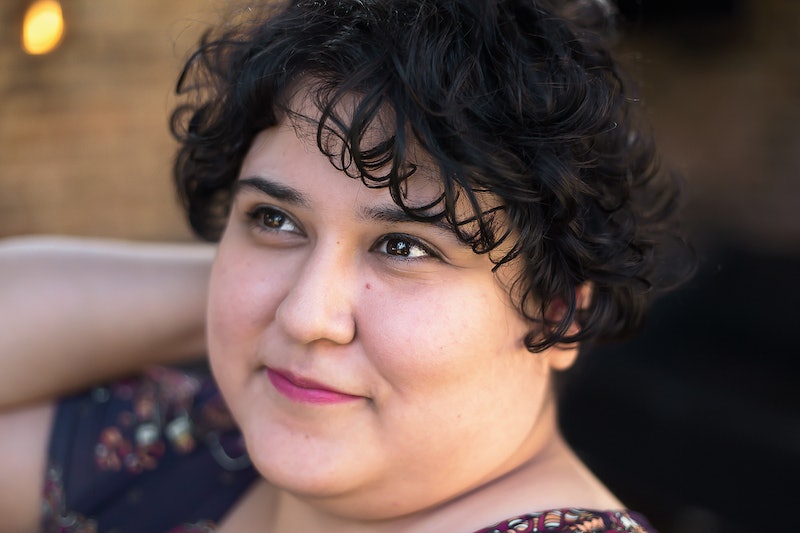 With award-winning photographer Substantia Jones of The Adipositivity Project and Manchester-based photographer Paddy McClave, Bustle is launching A Body Project. A Body Project aims to shed light on the reality that "body positivity" is not a button that, once pressed, will free an individual from being influenced or judged by toxic societal beauty standards. Even the most confident of humans has at least one body part that they struggle with. By bringing together self-identified body positive advocates, all of whom have experienced marginalization for their weight, race, gender identity, disability, sexuality, or otherwise, we hope to remind folks that it's OK to not feel confident 100 percent of the time, about 100 percent of your body. But that's no reason to stop trying.

Cynthia Rodríguez is sitting in a hanging egg-shaped chair when I ask them if they remember Rebelde, the Mexican teen-telenovela from the early 2000s. Of course they do. It was an absolute phenomenon, both in Rodríguez's home of Monterrey and nearer the equator in my native Colombia. Hell, it was a phenomenon throughout the entirety of Latin America, where the show's cast also toured internationally with their spin-off band, RBD.

We mutually gush over Miguel a little, the bonafide heartthrob among the protagonists. This perambulation through memory lane suits Rodríguez, who smiles and laughs candidly. All the while, they're being photographed. Their face — their double chin, in particular — is the focus of the shoot. Watching them light up with early millennium, Latinx nostalgia, their chins seem to frame their visage perfectly, adding texture, breadth, softness, and strength all in one. And yet, this part of their face has been the source of a lot of self-criticism for the poet, writer, and performer.

"Even within the international fatosphere and rad places of the internet, a lot of the fat femme people have perfectly chiseled faces. Even the deathfats," Rodríguez later tells me in an interview. "It’s mostly Photoshop and angles, but the need to conceal [double chins] in the first place is really annoying and a tad hypocritical, trying to fit into the 'you have such a pretty face' trope. Who says a pretty face can’t have a double chin? Who says a face needs to be pretty in the first place?"

As quite a progressive human who knows that conventional beauty shouldn't be considered currency, Rodríguez understands that nothing about their body, other fat bodies, or bodies that stray from "aspirational" imagery of attractiveness in any way, is inferior or intolerable. But they still catch themselves posing in slimming MySpace angles sometimes, and say that "Snapchat filters are heaven (or hell?) sent."

Lately, Rodríguez has been "going through a period of a lot of self-doubt and drastic inner changes," during which it has felt like a lot of the bad things that have ever happened in their life have been "because of [their] physical aspect." Even as a diehard supporter of the fat liberation movement, they often wish they were somebody else, or at least that they existed in a body different to their own. Maybe things would be easier. Less dangerous. Less painful.

Coming face-to-face with the stigma associated with fat bodies has been a recurring element of the poet's life since grade school, where it wasn't just their chins that were threatened, but their whole being. "[I remember] a chorus comprised of the entire classroom chanting 'GORDA' (the Spanish word for 'fat') in unison, without the teacher doing anything about it; a boy kicking me on the classroom floor, right in front of the teacher, again without her doing anything about it. Kids stealing things from my desk or placing things like plastic cockroaches [in it], solely because of my size. Kids stealing my lunch so I wouldn’t eat it. Kids smashing that nice glittery Aladdin flask [I had] when I was away, me coming back to drink water from it but tasting the alcohol from the glitter instead, fearing I was poisoned and just told, 'Then stop drinking, fatso, you don’t need it.'"

"[I remember] being dropped down the stairs and landing in the principal’s office, a highly religious person who told my mum these kids needed help and she would pray for them. All sorts of physical, mental, and sexual abuse going on in primary school partially because I was too innocent and head of the class, but mostly because I was fat."

Speaking in purely pathologizing terms, Rodríguez says they were only about 10 pounds overweight at the time, but that was enough of a reason to be a target. When the bullying escalated around nine years old, they ended up being moved to a Montessori school where the classes were smaller. But looking back on it, they say it doesn't seem quite right that they were the one forced to change and uproot their life, rather than the perpetrators of the abuse. "It was all my fault, and this was only the beginning," they add. "I’ve only been getting fatter ever since. I’m convinced that if I were this fat when I was a child, instead of being stabbed in the hand with a pencil I would have been stabbed in the throat with a knife."

Despite it all, Rodríguez tries their best not to get pinned in cycles of self-hate. "The reality is that I am stuck in this vessel until I die and who knows what comes next?" they say. "So I might as well enjoy the ride and the variable layers of chin."

Being in the U.K. for nearly seven years has helped Rodríguez find better emotional and psychological equilibrium. "Monterrey is very conservative Catholic but also very affluent and obsessed with appearances, so you have to shower every day and wear makeup and have an impeccable hairdo even if you just go to the supermarket," they note. "So it was quite a relief to see highly-ranked lecturers with greasy hair and no drop of makeup. Also, [British] soaps are very, very realistic compared to our telenovelas, and instead of people from the streets wanting to look like the people from TV, the people from TV looked like people from the streets: A lot of older, larger women, bald men, people of all ages and sizes and races."

Seeing conventionally attractive dudes unashamedly dating fat women is another highlight of living here, even if they admit that this is a "very heteronormative" snippet of information. They've also been asked out by folks of all genders in the U.K. more often than they were in Mexico. "I haven’t been booed off the stage for my looks, and my friends are not embarrassed to be seen with me in public," they later muse. "So that’s cool [too]." The U.K. isn't perfect when it comes to sociocultural beauty standards, by any means, but in many ways it's felt like a welcome relief for Rodríguez.

Looking at footage from both their spoken word and musical performances has also been playing a role in Rodríguez's quest for self-love these days. "I look at the pictures and video taken by other people, and sort of wonder why they felt they were still fit enough for publishing and sharing, even if I looked like a toad," they joke. "Maybe I don’t look like a toad to them, or I look like a very nice toad."

Analyzing their solo images can still be difficult sometimes: A tool for picking apart all the things they've been told to hate about themselves for so long. Band performance images, on the other hand, are another story entirely. "I can’t help but be like, 'Damn, we’re hot,' and I catch myself saying, 'We’re hot,' instead of, 'The other girls are hot and I am shit.' It’s like, being with these strong, beautiful women makes me realize about my own strength and beauty. We don’t owe beauty nor strength to anyone anyway, but then I think that if I managed to get such talented and stunning people inside and outside to work together, then I’m not that bad. Am I?"

If ever they're hating on their double chin, Rodriguez also knows they can turn to the work of babes like Beth Ditto, Poly Styrene, Brittany Howard, Kirsty Fife, and Shannon Shaw, all of whom created excellent music with excellent double chins in tow.

Creating is perhaps the most crucial opportunity for solace that Rodríguez can reccomend to anyone struggling to find their confidence. "Be out there. Make stuff with all of your chins. All of them. And maybe with other people’s bigger and smaller chins," they say. "Be open and be daring, as long as your personal safety allows it."

They also believe that looking at oneself objectively, as a distant observer might, can help you regain perspective on the things that really matter. "[Observers] may not think you look like crap because they are dealing with their own insecurities, or they are too dazzled by your overall greatness; but then if some people do actually think you look like crap and act out on those feelings against you, it talks more about themselves than about you," they posit. "Like those kids who used to bully me and the principal said they needed Jesus. They needed Jesus, maybe, but they also needed a kick in the shins."

The same is arguably true of anyone or anything that's making you feel like you have to paint your body with a brush of bitterness. It's not you, or your chins, who needs a kick in the shins. Chances are it's them. Chances are it's always them.

More like this
10 Stylish Plus-Size Boots That Will Fit Wide Feet & Calves
By Dominique Norman
Here Are All 703 Outfits Rachel Wore On Friends
By Kat George
In Their Divorce Settlement, Here's What Kanye Reportedly Must Pay Kim K & Kids
By Radhika Menon
Victoria Fuller & Greg Grippo Addressed Their Relationship Timeline
By Grace Wehniainen
Get Even More From Bustle — Sign Up For The Newsletter